The Time for Video Production is Now!

These are exciting times for church video producers. We have at our disposal toolsets that offer an unprecedented feature set, at previously unheard of prices. When I started my career in video production (just after electricity was invented…), it cost a minimum of $250,000 in equipment just to produce what was then known as “broadcast quality” video. Now that cell phone video is being broadcast, that term no longer has any meaning, but that’s another post. A few short years later (shortly after the computer was invented), we got into digital editing. We decided to skip the first wave (Avid—cost: $100,000) and join in on the second (Media 100—cost: $35,000). It was a great decision and I haven’t looked back. Every now and again I’ll reminisce about the days of match frame editing on an A-B roll suite, but then I remember what a pain it was to make it all work.

Today, the story is much different. It is now possible to put together a video production system with an off-the-shelf Mac or PC and readily available software for well under $5,000. Amazingly, that system will have vastly superior capabilities than even the quarter of a million dollar systems of old. Today, we’re going to look at the two 800-lb gorillas of the video editing market, Apple’s Final Cut Studio Pro, and Adobe’s CS3 Production Premium Suite. The usual disclaimers apply here; I’m not on the payroll of either company, however I am doing some production work for Adobe at one of my jobs. In exchange for a Mac Pro and a copy of Final Cut Studio 2, I’m happy to say nice things about it all day long, however ;-). Ok, I’ve exposed my bias. So there.

First we’ll look at Adobe’s Production Suite. This summer will mark the long-awaited return of Premier Pro to the Mac platform. Those of you new to digital editing may consider Premier a PC only product, but in fact, it began life as the first real QuickTime editor on the Mac. Premier Pro offers an impressive feature set, along with great ease of use. One thing Adobe had done really, really well in the upcoming CS3 version is to integrate Premier, After Effects, Photoshop, Soundbooth, Illustrator, Encore and Flash. One of my favorite new features is “Dynamic Link,” which allows you to edit a section in Premier, export it with no rendering to After Effects, add effects, compositing and filters in AE, then export back to Premier—all with no rendering. If you’ve ever gone through this process the old way, especially on a PC (Windows does not fully support QuickTime and the reference movie concept which makes it a little easier on the Mac), you’ll recognize this as a huge timesaver. We’ve been able to import Photoshop files into After Effects for a long time, but the integration is tighter than ever. Moreover, Adobe as included Flash in the new workflow, which will make it far easier to get high quality video on the web.

Other notable time savers include the ability to author a DVD right from the Premier Pro timeline for quick approval copies, an easier way to create moving menu elements for inclusion in DVDs, the ability of Photoshop Extended to handle video—giving you the ability to paint frame by frame, and a really impressive array of import and export options.

The Production Studio will include Premier Pro, After Effects Pro, Photoshop Extended, Soundbooth, Illustrator, Encore and (for the PC only for now) OnLocation (formerly Serious Magic’s DV Rack) and the Ultra keying package. OnLocation and Ultra are Adobe’s newest additions that come from the recent acquisition of Serious Magic. I’ve used Ultra quite a bit, and it’s a powerful keying tool. Even though it’s currently Windows only, I expect that to change as Adobe gets into further development of the code. On a newer Intel-based Mac, I suspect that it would run just fine in the Parallels environment, so Mac users are not completely out in the cold.

I’ve downloaded and played with the beta version of Premier Pro CS3 and am really impressed. Adobe has done a lot of things right here, as they continue to buy up other innovative companies, I expect the suite to only get better. My only major gripe is that they went with Illustrator rather than Freehand, which they killed off when they bought Macromedia. I’m still bitter about that if you want to know the truth. Otherwise, this $1,700 package offers huge bang for the buck and gives you the tools to produce the most professional looking videos. 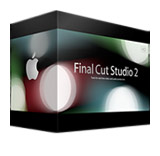 Not to be outdone, Apple has recently introduced Final Cut Studio 2, which also offers an impressive array of features, at an equally impressive price. Final Cut Pro is arguably the most accepted and widely used editing software today. TV shows and commercials, major motion pictures and scores of video projects are all cut on Final Cut. It’s fast, flexible and easily configured to an individual editor’s liking. Plus, because it runs on the Mac OS, it’s inherently stable (oops a little more bias slipping in…). FCP was an impressive package before, and with Studio 2, they’ve really kicked it up a notch.

The box includes FCP 6, Motion 3, Soundtrack Pro 2, the new Color, Compressor 3 and DVD Studio Pro 4. FCP includes several new features that will make it even more popular in today’s multi-format world. First is an open timeline, which means you can mix and match formats on the same timeline, in real-time. This is a huge boon to anyone who has to cut together videos made up of sources from all over the place (that includes us church editors a lot!). Another big plus is the Pro Res 422 codec. Apple says Pro Res offers HD quality at SD file sizes, which is a good thing because HD video really eats up drive space in a hurry.

Motion is Apple’s answer to After Effects, and with version 3, they’ve made it more powerful. With Motion you can now composite in 3D space, utilize point tracking and match moving and employ image stabilization. Soundtrack Pro is a very powerful, easy to use music composition and editing software. Now offering full 5.1 surround sound support, as well as an auto-conform feature (changes made in the project in FCP are automatically reflected and updated in Soundtrack—very cool), it is an even more powerful audio tool in your toolbelt.

Compressor has matured into a full-featured multi-format delivery tool. After you finish your project in FCP, export a reference movie to Compressor and let it generate versions for DVD, the web, mobile devices and more. I’ve used Compressor quite a bit and am always impressed with the excellent image quality it produces, not to mention the ease of use.

The newest addition is the one I’m most excited about: Color. FCP introduced the 3-way color corrector a few years ago, and it revolutionized color correction on the desktop. Now with Color, Apple has done it again. Color is a fully developed, professional color grading tool that appears to rival stand-alone (and trés expensive) color graders like the DaVinci. One thing that really irritates me about many of the videos I see is inconsistent color from shot to shot. With Color, it is easy to make each shot match, or even better, to create a “look” for the entire video (think O Brother, Where Art Thou…).

All of this power comes at a shockingly low price of $1,300. If that sounds expensive, consider that even 10 years ago, this kind of post-production power would easily have cost $300,000, and required an entire room to house the hardware. If there was ever a time to get into the video production game at your church, this is it.

So which to choose? Honestly, it’s a tough call. I love Final Cut Pro, but I also go way back with After Effects (to version 2…). I really dig Photoshop Extended, but Color has really caught my eye. If I could, I’d have them both. Really, a lot will come down to personal preference. That and platform. If you are tied to the PC (my thoughts and prayers are with you…oooh, more bias!), your decision is made. Thankfully, it’s a good one. On the Mac platform, the choice is much tougher, and would probably depend on what you value in your workflow. In the grand scheme of things, I don’t know that you could go wrong with either.

One thing to consider is where you plan to be in a few years with your video capabilities. Apple has developed some great server level tools that allow even non-IT people to build powerful multi-seat editing facilities with their XServe and XRaid solutions. Keeping it “all in the family,” may make a lot of sense as they all come with Apple’s legendary ease of use. Not to say it can’t be done with the Adobe Suite, it’s just a bit tougher and requires the integration of multiple vendors.

I suppose for me, the choice will be this: Whoever delivers a Mac Pro and a box of software first for me to officially “review.” And lets me keep the review copy (and hardware…) when I’m done. Anybody listening? Apple, Adobe?

P.S. You can download a (pretty much) fully functional public beta of Premier Pro CS3 at the Adobe Labs web site. While I couldn’t find a preview download for FCP Studio, there is a lot of information about it here.