It was our first night of Meal Groups. Meal Groups are like small groups, only we eat together, then study the Bible in homes. This season, instead of reading a book and doing a study, Meal Groups are working through a DVD series. It’s a good series, with some good teaching. I was really enjoying it until the first scripture graphic came up. The graphic itself was well designed and looked really good. What we could see anyway. Sadly, the creator of the graphic did not adhere to well-accepted standards of what makes titles safe. Instead of seeing what he (or she) saw on the computer monitor, which could have looked like this… 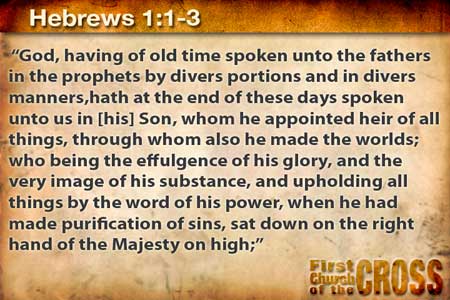 What we saw looked a lot more like this: 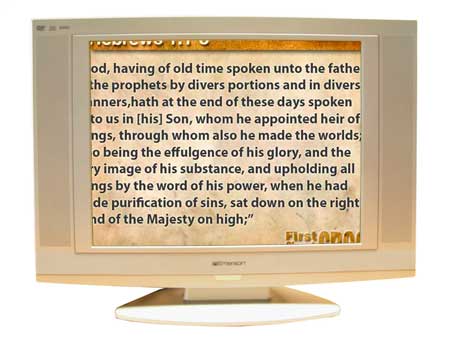 The problem is called “overscan.” Nearly every TV sold to a consumer today will have some level of overscan. That means that the image cuts off part of the picture. This is done to ensure that the screen is always filled, even if someone messes up in production and sends a non-standard picture over the air. Overscan is a bit of a pain, but it’s been around as long as TVs have been around, and we know how to deal with it?

Or do we? At one time, video production remained a mystery to most mere mortals. If you didn’t know how to line up horizontal sync using a waveform monitor or cross pulse, you could not get a clean edit. This was back in the days of tape to tape editing, which is where I started. Back then, to simply cut some video together, add some dissolves, the occasional effect and text, it took 3 decks (all in perfect sync), a switcher, a digital video effects unit (DVE), and a character generator (CG)–all in perfect sync–and an editor, usually a CMX-style text based editor.

At the beginning of each edit, we would double check our alignment, roll some bars, make calibrations and ensure things were where we left them. That could take 1/2 hour or more. Not so today! If I want to edit some video today, I wake up my MacBook Pro or MacPro, launch FinalCut Pro, hook up my DV camcorder via FireWire and capture. All my edits are done graphically, and my images can come from just about anywhere. It’s a lot simpler.

Unfortunately, with that simplicity comes ignorance. Here’s what I mean. Back in the day, if someone knew how to line up an edit suite, they also knew the rules for creating “broadcast safe” video. Broadcast Safe means that it will show up properly on just about any TV in the country. Given that the above mentioned edit suite could cost anywhere between $100,000 and $1Million, the average Joe didn’t have access to it, but people that did knew what they were doing (probably because they went to school or through an apprentice program).

Today, Joe can walk into an Apple store and in 30 minutes (and for less than the cost of a used car) come out with more video editing capability than we could have dreamed of with our our A-B roll suite. Except Joe hasn’t been to broadcast school. Joe doesn’t even know what “title safe” means. And he’s positively stymied when his graphics are cut off when he watched his masterpiece at home.

Thankfully, ignorance can be cured. To help take the mystery out of Title Safe and Action safe, I’ve created a tutorial, which you can view here: Creating Title Safe Graphics. Later, I’ll work one up that deals with legal color and luminance levels.