Back in the day, when I owned my video company, my partner and I were sticklers for image quality. To be sure we had properly exposed and color balanced shots being laid down on tape, we traveled with a pretty expensive field monitor and a handy little device called the Hamlet Micro Scope. The Micro Scope was a portable waveform monitor/vectorscope, and would overlay the scopes on top of the video signal. It was especially useful when shooting on green screens, as we could see how even our lighting was. I miss my little Micro Scope, and it turns out they still make one, as seen here. But that’s another post.

I’m still a stickler for properly exposed shots. Problem is, the GL-2 I have to use at church doesn’t help much. The exposure meter is dubious at best, especially when shooting people against a black background (which we do a lot). There are zebras available, but they are not the nice dual-stage ones I much prefer. And since you can’t calibrate the LCD, and the brightness changes radically depending on angle of view, there’s really no way of knowing what your exposure actually is.

Somewhere in the last few weeks I read of someone using their MacBook Pro and Final Cut Pro as a field monitor and scope setup [Edit: Source located; I read it at Dave Smith’s blog creative | ideas—thanks, Dave!]. It seemed like a good idea and I had a shoot today, so I tried it.

Man if it didn’t work like a charm! All I had to do was take the FireWire out of the GL-2 and shove it into the MBP. I launched FCP and entered Capture mode. In the Clip Settings tab, I activated the Video Scopes. And there you go! You get a decent sized preview of the shot (which is much easier to check focus with than the GL-2’s low rez LCD), and full waveform/vectorscope monitoring. As a bonus, the audio meters also work, which makes it easier to tell exactly where you are level-wise. 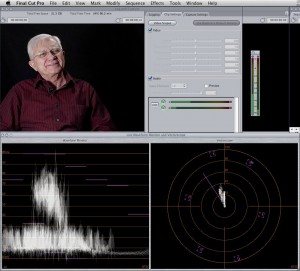 Look at my nicely exposed image…and oh look, my color balance is off by a few degrees… (click to enlarge)

I wish I could take credit for it, but I can’t. I will, however, use this technique as often as I can. I think I’ll even look for a longer FireWire cable so it’s easier to set the rig up. The only real downside is that there is a slight delay in the preview, and it’s a bit jerky. I can live with that however, knowing that my shots are now properly exposed. Give it a try next time you’re out on a shoot. I’m no longer jealous of Adobe’s (formerly Serious Magic’s) On Location—though I’m still going to look for the install discs, I know we have them around somewhere.