Well, the good news is I found my camera cable. Turns out that when I was getting ready to leave home, I was cleaning stuff up and put the cable for my little camera in the bag with my big camera thinking it went to the big camera. So alas, it stayed home while I went to Chicago. As it turns out, I didn’t take as many pictures as I thought I might. But here are some that turned out OK. Keep in mind, this is a small Lumix point and shoot, so the image quality is a little lower than my DSLR. Still it give you a good idea what things looked like. Click on any of the pictures for a larger version. 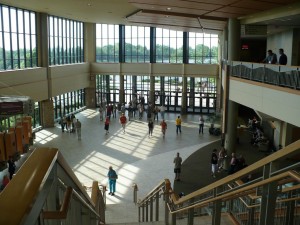 The main lobby of the auditorium. The building is just beautiful and huge. Attendance was down a bit this year due some tough financial times for many churches. 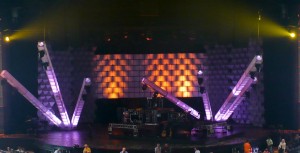 This is the main stage. The back wall is a flexible scrim that has been shaped into a grid pattern. It can be lit from the front (as this pic shows) or projected onto from behind. The “arms” are truss wrapped in a translucent poly and lit from within. The side walls are a diamond shaped scale-type thing bent along the short axis (and not round cymbal-like as earlier reported). The overall effect was great, and gave the lighting guys a lot of texture to light up. I understand it created some difficulties for the sound guys, though with regard to wireless. 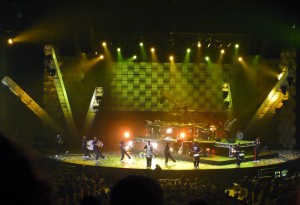 They had a drum line team come and start off the conference. It was a bit like Blast, but with no horns. I don’t know who they were, but they were very good. The lighting really starts to take effect now. 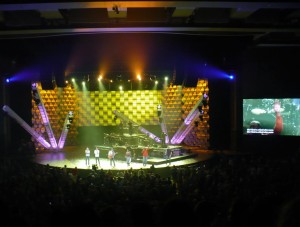 The worship team sounded just as good as they look. If you’ve never been to Willow, that giant screen on the side is an LED model that I understand is run at about 50% brightness because it’s just that bright. It’s 14 x 24 feet, and runs about 200,000 ANSI lumens (!!!) and runs in HD. I never did find out if they have upgraded their video to HD this year, but the images looked stunning. Does anyone know? 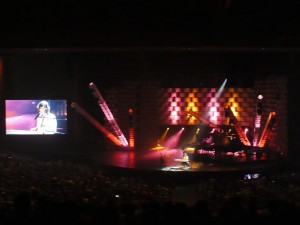 This was my favorite lighting of the week. The color palate was stunning. This is Kendall Payne, a singer-songwriter I’ve never heard of but who will be added to my iPod soon. She’s really good, and funny, and thoughtful. A triple-threat. 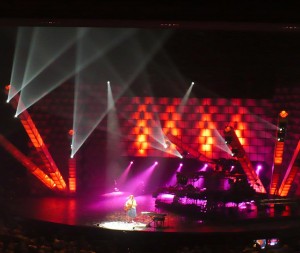 This light cue wins the “Church Tech Arts Award For Best Light Cue” award. Really. It was my favorite of the weekend. Great job, guys! Sorry it’s a little blurry, I had to slow the shutter down to get the beams of light to expose properly. You get the idea…

So there you go. A quick photo recap of what it looked like. Don’t you just feel like you were there now?