If you’ve been reading this blog for more than a month, you know that we currently mix on a Yamaha M7CL-48 at Upper Room and CPC. I can’t take credit for putting it there, but it’s what I would have put there if someone asked me. For all but the largest churches, that desk hits the absolute sweet spot for performance and value. It’s smaller sibling, the LS9 is also a great board. The following applies to both of those, and other Yamaha digital boards, such as the PM5D, DM1000 & 2000, 01V and O2R (though some may use slightly different software).

First, let’s talk a little about Studio Manager. It’s a Windows-only program (bugger–however some Yamaha stuff runs on Macs) that enables your computer to talk to the console in question, and make control surface and configuration changes. Studio Manager is like a shell that translates commands from another application, the editor–which is board specific– to the network, and ultimately to the board.

To make this work, you first need to install the DME-N Network driver (if you don’t do it first and try to run Studio Manager, it will pitch a fit and not work until you uninstall Studio Manager, then install DME, and finally reinstall Studio Manager–what can I say, this is Windows). The DME Network driver essentially translates input from the editor into Midi and sends it to the board. It’s a bit wonky, but it works. Next, install Studio Manager, and finally the editor application for your particular board. All the software you’ll need is available on Yamaha’s website. I have all of this set up on my MacBook Pro, which I access using VMWare’s Fusion that runs Windows XP. Occasionally the network connection gets flaky, but overall it works well.

Interestingly, if you have several digital boards around your church, and they are all on the network, you can load all of them into Studio Manager, and work with them all. This could be a lot of fun, or extremely confusing. You be the judge.

It’s also important to note that you must have your board on the network and accessible with a static IP address prior to getting launching DME-N Network. We hooked ours into a Linksys wireless hub/switch, so we can access the network wirelessly with a strong signal in the sanctuary. Once we make some changes in our IT structure, we hope to be able to tunnel in from the outside and access the board from home. 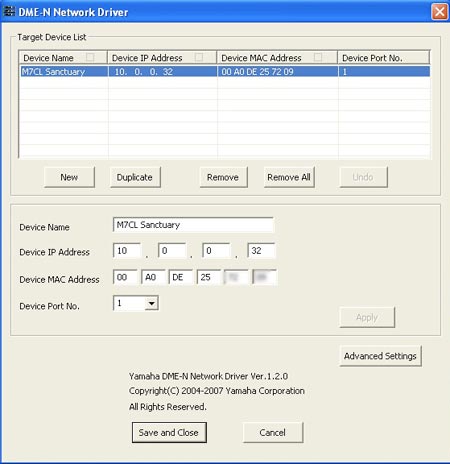 Enter your board’s info, or have the software discover it for you.

Once all your software is installed, make a trip to the Windows Control Panel and launch DME-N Network Driver. You can either type in your board’s IP address directly or have the software discover it (oddly, it’s under Advanced Settings). Give it a name that makes sense (especially if you have more than one) and Save & Close. Now you can launch Studio Manager. 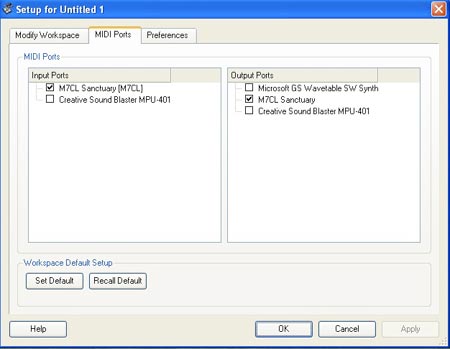 Set your board for Input and Output.

Hopefully, your board now appears in the Input Ports and Output Ports columns. Check those off, and click OK. If it doesn’t you may have to go through a round of re-starting and double-checking settings. I had to play with this for a while to get it to work the first time. After that, it’s been working OK. 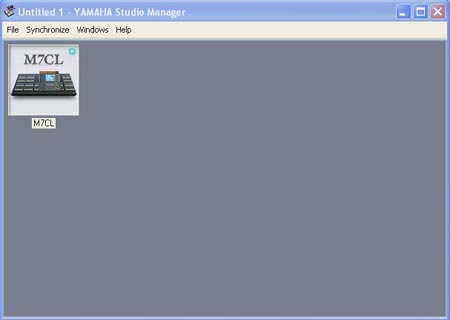 Finally, what we’ve all been waiting for…

Finally, you can add your board’s software to the Studio Manager “workspace.” Then it’s time to fire it up and see what she does. You’ll be presented with an interface similar to this (or exactly the same if you have an M7) 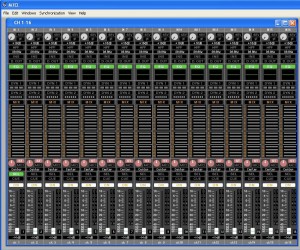 The basic interface for remote mixing. (click to enlarge)

You’ll view individual channels in banks of 16 (which means 3 windows for all 48 channels). There is a detail channel mode, patch editors, full metering, the Library, the Rack, Scenes, DCAs, Matrixes, the whole works. You can adjust almost every function on the board with the software. Some things are far easier to do in software (like patching), others are far easier on the physical board (like mixing). Either way, having the control of the board on your laptop, PC or tablet is very useful.

That’s a basic setup, more detailed instructions are found on Yamaha’s website. Now that we’re up and running, tomorrow we’ll talk about a few applications for this amazing technology, and even go one better, just because we can. Read part two here.