When I joined Upper Room, our tech booth was in need of, how to say, a little rennovation. There was a lot equipment packed into a small space. Some of it was hooked up, some not. Wires were coming in from all over the church; some labeled, some not. And there was some equipment that could best be described as “temporary.”

This is what I walked into when I started. (click on any of the photos to enlarge) 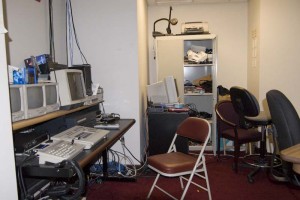 This is the view looking in from the doorway. Welcome to Minnesota! 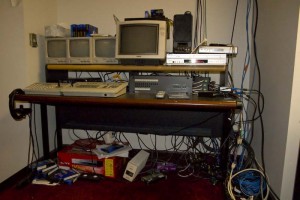 The video control desk. I’m not even kidding, this is what it looked like. 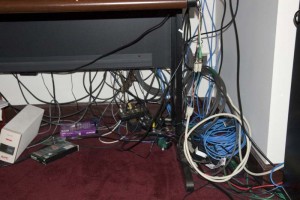 I have nothing to say about this. 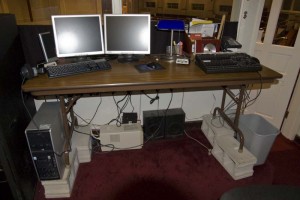 How about that lightboard. Yup–it says Behringer. And yes, those are cinder blocks. 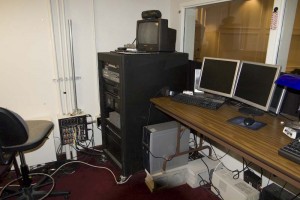 The reason for the cramped table space was this huge rack, with hardly anything in it. Part of the original deisgn-build.

Clearly I had some work to do. What you don’t see is some really bad wiring (BNC ends not crimped, but put on with heat shrink; DMX cable running next to fixtures with melted insulation; a DMX network with no splitter or DA; a single audio feed from FOH that had 9-count ’em 9- Y-cords in it; etc.). For the first month, my main task every Sunday was just trying to make things work. I don’t like having to function in such a situation, so I decided to start tearing things apart, and making it better. I wanted to be like Ty and just blow it up. But they wouldn’t let me. So a rennovation was in order.

As the first step, we pulled all of the DMX cables and ran new ones. We had been having issues with lights turning on and off randomly, or not responding at all. Rather than mess with it, we ran new. I also installed a DMX DA to properly split the DMX signal to the 4 dimmer racks and color scroller. Contrary to popular wisdom, you’re not supposed to split a DMX signal without a splitter. Causes all kinds of relections and other bad stuff.

Next, we tackled the audio feed. I pulled all the Y-cords and used a proper DA (which, oddly enough was lying on the floor in a pile of cables…go figure). I also cleaned up the video table with a proper rack, and replaced the monitor. We moved the rack to a better part of the room, and added another table. In the process, we dumped the el-cheapo DJ style Behringer light board for an ETC Express 3 (which, also oddly enough, was sitting in a closet, unused–I wish I had good explanations for this…) Just doing this was a huge improvement. 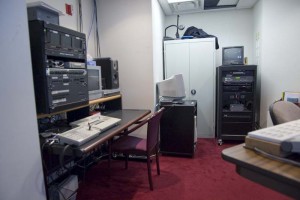 You feel better already, don’t you? 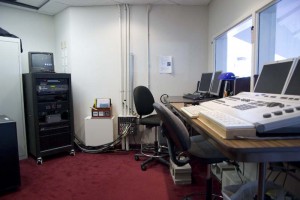 It’s starting to look like a real tech booth now. 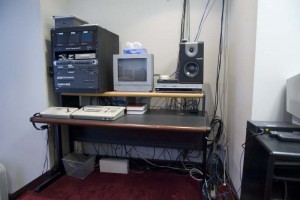 The video desk still has a big clump of wires on the floor, but at least you can put your feet under the desk now and not worry about turning the cameras off (that was a real issue before. I wish I was joking). 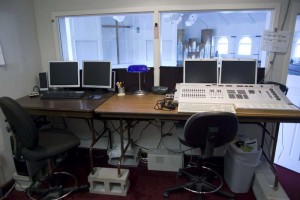 The extra table gives everyone room to spread out, and easily accommodates the new light board. I can now stand between the presentation tech and the light tech and see what’s going on in the room. There’s now an iMac on the left side as well, but I forgot to take a picture of that.

I call this phase, part 1. Clearly it’s an improvement, but I knew there was more work to do. It got us through the last half of the ministry year, however, and everyone just felt better coming in to do their thing. It’s amazing the difference the physical space has on how one performs their job. In the old space, which was clearly in chaos and not thought highly enough by anyone at the church to clean up and improve, the volunteers felt unappreciated and didn’t take their jobs too seriously. It was fun watching the looks on their faces when they came in the first time after phase 1. Not surprisingly, everyone’s game improved.

As I said, there was still work to do. Though Cat-5 cable was pulled all over the church, and video over Cat-5 baluns purchased, the system to route the video was a bit convoluted. This made for some challenging times at Easter and a later large funeral. Though we had a tie line between the stage and the booth, using it to send video (or SGA signals) down there was difficult. And we could not easily address the projectors and any other video destination separately.

Audio was also an ongoing challenge. Though I’ve taken to mixing our own mix remotely using Studio Manager (read about it here…), controlling the volume was a challenge. And I found we were sending too hot a signal to the DVD burner, which meant most of our recordings were distorted. While I had sorted out the big problems during phase 1, what we needed was a plan. A holistic plan to accomplish what we needed to, and make it easy. Here’s what I came up with. You can click to enlarge, or view a PDF of the file here. 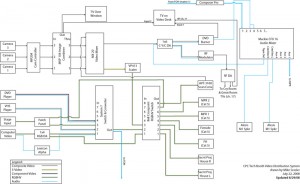 This plan gives us a lot of options. We can send video to anywhere, in full RGBHV resolution, without effecting any other destination. I can address our sanctuary projectors independently, and can send sanctuary cameras, or computer, or DVD, to the multi-purpose room, fireside room or fellowship hall for overflow–all with the push of a button. Audio can now be controlled properly, and the booth volume no longer effects the record volume. Best of all, I’ve posted this diagram in the booth, so anyone can take a minute and figure out how to get video and audio where they need it.

I also went through and labeled all the cables. I’m a big proponent of labeled cable. It takes no time to do, and saves so much time down the road. One of the interesting things about this plan is that it required very little new gear. Most of the equipment on the diagram was already there, it just wasn’t utilized. Or it was in another room not being used. I did buy a new scan converter, a scaler, a BNC patcbay (so I can turn around our tie line to the stage and use it as an input or output), and I’ll be picking up a DBX 266 compressor to manage levels on the booth feed. Otherwise, my predesessors bought everything else.

After two really long days, this is how the booth turned out. 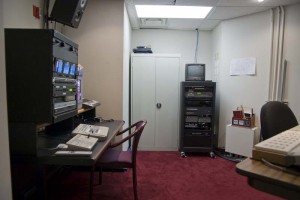 Finally, it looks like it should. It’s almost Zen-like now, wouldn’t you agree? 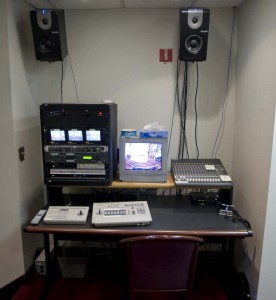 Oh, I forgot, I also bought the Alesis M1 powered speakers. And the hardware to wall-hang them. I’m very happy with those. There’s still a lot of wire running down the wall…I may wiremold that some time in the future. 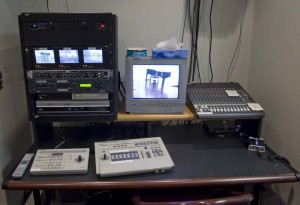 What was once an unruly mess is now a comfortable workspace. I even left some desk space open to put my laptop on Sundays. There’s an 8 port network switch tucked back there, so I can go wired.

This rack used to be half-empty, and what was there was not all that effective. I’ve moved all of our RGBHV routing, switching and distribution here. This keeps the runs short, and makes it easy to wire. The Cat-5 video also leaves from this rack now. Future updates will include moving the Clear-Com base station up here (from FOH), and additional Cat-5 video baluns, as well as the aforementioned BNC patchbay.

So there you have it. Already, people who have seen it feel really good about it. It’s much easier to work in, and it just feels better. There’s so much to be said for having a workspace that feels productive. And when you raise the bar in your physical plant, the people who work in it will step up as well.

We still have some gear that could be upgraded. Our camera package is essentially a security camera system. Our video mixer, the MX-20, is getting a bit long in the tooth. And some real broadcast monitors would be nice. But given what we actaully do with video right now (which is not much more than archive), the current gear is fine. And I want a new PA first.

Personally, I feel really good about it. Many were thrilled with Phase 1, but I knew it was only 1/2 complete. Now that it’s done, I’m ready to go on to our next project. I’ll be telling you about that in the coming weeks. For now, I’ll just say that this was good practice.