In the previous post, we got started talking about groups. Most church sound boards have groups. Some have VCAs. As a church sound volunteer, it’s important to know what they do and how to use them. To recap, Groups are additional mix busses on your board that allow you to collect inputs and make them controllable by a single fader. That’s the vast over-simplified version anyway. A more elegant way to accomplish that task is with a VCA.

So now, picking up where we left off…

The VCA Masters from a Yamaha PM5000 (click to enlarge)

VCA stands for Voltage Controlled Amplifier. The clears it all up, no? Well, how about this: According to Wikipedia, “A voltage-controlled amplifier is an electronic amplifier that varies its gain depending on a control voltage.” In other words, rather than controlling the level of a signal through a resistance network, the way a typical fader control does, a VCA uses changes in control voltage (which is adjusted by fader movement up and down) to control an amplifier that alters the level of the signal. In a non-VCA fader, the audio signal actually runs through the resistance network of the fader and the level is altered based on how much resistance to signal flow there is. Lowering the fader raises the resistance, lowering the level of the signal.

In a VCA desk, when you raise and lower the fader, you’re actually raising and lowering the control voltage that tells the amplifier to raise or lower the level of the signal. It’s kind of like the difference between a switch and a relay. A switch has the signal (say 110 volts of AC to power your light) flowing right through it. When you turn off the switch, you directly break the connection. A relay however is controlled by another switch. Flip the switch, and the control voltage tells the relay to close and let signal through. Hopefully, this is making sense.

VCAs have several advantages over regular faders. First, they last longer and are less prone to get “scratchy” because of wear and dust. Second, because the fader is not processing the signal, VCAs can be more accurate and precise. Finally, because a VCA is sort of like a remote control, they can be remote-remote controlled. Enter what is known as the VCA (really, they’re VCA Groups).

For the purposes of illustration, let’s assume that we’re using a 1K tone as our signal source, and that we have adjusted the head amp (or trim, or preamp, or gain, or whatever your board calls it) so that the channel, when in PFL (or solo) mode reads 0 dBu. 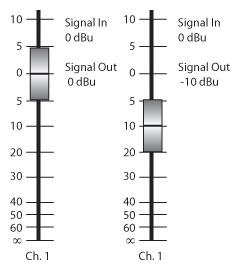 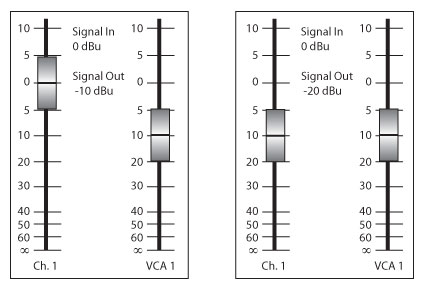 Consider this; we can accomplish the same thing, level-wise, with a group. However, we’re sending the signal through 2 amplification stages. And once the signal leaves the group, it goes through a third amplification stage at the main faders. With a VCA, there is a single amp stage on each channel. The channel faders and the VCA faders simply tell that amp what to do. At no point does the signal pass through the VCA group, because there is no “group.” I said it gets interesting, so here’s how it could play out.

At Upper Room, we have our VCAs (well, technically they’re DCAs, but they act essentially the same) set up like this: 1–Kick & Bass; 2–The rest of the drum kit; 3–Guitars; 4–Keys; 5–All Band; 6–Vocals; 7–FX; 8 Speech mics. VCAs 1-4 act like groups for us, in that we can quickly adjust the entire drum kit up and down, add or subtract keys, whatever. However, we also have the whole band on another VCA. So that means that every channel that is assigned to VCA’s 1-4 is also assigned to VCA 5. That allows us to take the level of the entire band up and down on one fader, without altering the relative levels between each of those channels. If during the set the band gets crankin’ and starts to overpower the vocals, we turn down the band VCA. That’s it, the whole band comes down.

Where this is very elegant is that the signal is processed strictly in the channel amp; it’s not going through multiple amp stages of gain/cut to get there. So let’s play this out. 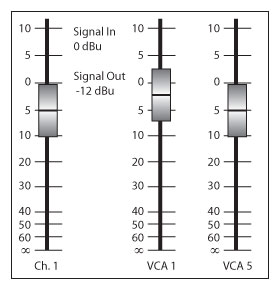 Take the kick, channel 1 in our setup. Let’s say on the fader, it’s set to -5 dBu. So at the channel level, we’ve knocked 5 dB off the level (relative to 0, or unity, which is determined by the head-amp control). Now, as part of the drum kit, it’s assigned to VCA 1. And we might run that at -2. That knocks another 2 dB off the level for a total cut of 7 dB. As part of the band, it’s also assigned to VCA 5, which we might run at -5 also. That’s 5 more off, for a final level of -12 dB. And again, all of this level changing is done on the channel strip itself, in a single amp stage; it’s not going through multiple stages at each VCA. The VCA groups simply alter the control voltage of that channel’s amp.

By definition, and unlike a group, a VCA group can never overload. This is because it’s simply a “master remote control” for a bunch of inputs. Even if you push your VCA group fader to +10, you’re merely telling all the channels assigned to that VCA group to add 10 dB of level to their respective signals. At that point an individual channel might clip, but the “group” never will because it’s really more of a virtual group.

We should also note that by lowering VCA 1 (kick & bass) to -2, it also tells channel 9 (bass) to turn down by 2 dB as well. And by setting the VCA 5 at -5, it tells all of the band channels (basically 1-14) to lower by 5 dB. But each individual channel can be adjusted relative to each other, so the mix is preserved. 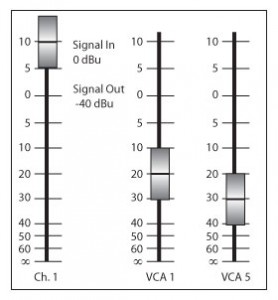 You do have to be careful with VCAs, however. Because you are remotely controlling a channel (for lack of a better term), you could be tempted to over-drive your input channels with too much signal. This could happen in the above example very easily. Let’s say someone wasn’t paying attention and set VCA 1 (kick & bass) to -20, and VCA 5 (the whole band) to -30. That would lower the signal of the drum mics by 50 dB. That would be pretty low in most systems. You would probably want to hear more drums than that, and even if your channel fader is already at +10, the total output of the channel is -40 (+10 plus -20 plus -30). So you might be tempted to turn up the head amp control to get more level. However, you would quickly drive the head amp into distortion. When using VCAs, getting good gain structure is more important than ever.

Still, that shouldn’t dissuade you from using them. Their much cleaner than groups, and the level of control is far greater. You also have more options for control, as shown above. Moreover, when you mute a VCA group, you also mute the channels. On most boards, this will have the effect of shutting off the Aux sends as well, which keeps you’re monitors quiet when you want them quite. Another benefit of VCAs.

DCA stands for Digital Controlled Amplifier. Essentially, they are the same thing as a VCA, but on a digital board. Every digital board I’ve seen has DCAs, which makes sense because the signal is already in the digital domain, and it’s just a simple matter of programming to make a DCA group behave the same as a VCA group. So there’s not really any more to see here. Move along.

You do have to pay attention to your DCAs on a digital board, however, because most of the time they’re on a separate layer. So it’s really easy to have the scenario I illustrated above play out (40 dB of cut applied without you knowing where it came from). As always, proper gain structure is important.

I hope this has shed some light on the concept of Groups versus VCAs/DCAs. While they can all have the same ultimate effect on the signal, they go about it differently. And when you use one versus the other depends mainly on your board. If you have both, use VCAs for your channel “grouping” and groups for sending mixes somewhere else besides the main speakers. They are great for “submixes” for an Aviom system for example. If all you have are groups, break your band up into logical “groups” and control them as described. Most of all, I want to encourage you to explore what your mixer can do. It probably has more power than you thought. To paraphrase my favorite foodie, Alton Brown, “Get out there and play with your mixer” (preferably during non-service times…)