As I mentioned in a previous post, I recently picked up two Chauvet D-Fi wireless DMX units. The motivation behind this purchase was to save the hassle of running 200′ of DMX cable from our tech booth (in the back of the balcony) all the way to upstage left–and picking it up every weekend. We needed to control two of our portable 4-channel dimmers from our Expression 3, and wireless seemed to be the way to go.

Initial research suggested that wireless DMX units were pretty pricey; often exceeding $500-600 per end (a transmitter and a receiver is needed for any such system). While running the cable would be a pain, spending $1000+ was not an option if I wanted to get anything else done this year with my meager budget. 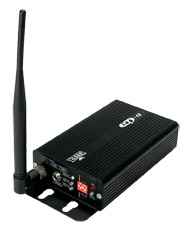 Enter the Chauvet D-Fi. The units themselves are pretty unglamorous. Made of simple extruded aluminum, they seem reasonably rugged. A model of simplicity, each unit can be switched to be a transmitter or a receiver. One end houses 3-pin input/output/through jacks, while the other end has a jack for 12v power (external wall wart), dip switches for selecting frequency and Tx/Rx mode, the antenna, and LEDs for status indication.

The D-Fi has just been updated, and I managed to hit stock turnover just right. I received one of the old units and one of the new units. There are only 2 differences between old and new–the original unit used one of 2 frequencies in the 900 Mhz range, while the new is selectable between 6; for an antenna, the old came with a 1/4 wave, the new has a 1/2 wave. Presumably, the 1/2 wave antenna will provide a little better range, and the additional 4 channels will help ensure you can find a clean frequency for operation. 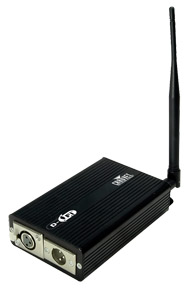 What attracted me to the D-Fi was the price. You can find them all over the web for $180 each, which means you can sent an entire DMX universe a few hundred feet (it’s rated for 100 meters, line of sight) for just over $350. Since a simple 200′ DMX cable was going to cost me $150, this seemed like a reasonable upgrade, especially considering the labor savings for an eight-week series.

But that’s only if it works. I’m pleased to report, it does. Quite well. I was initially disappointed to see the inclusion of 3 pin connectors for the DMX. According to the official DMX-512 standards, the correct pinout is a 5 pin. The audio industry standardized on 3 pin XLRs for audio many years ago; it would be nice if the lighting industry would do the same with 5 pins. This is especially important since a mic cable does not have the correct impedance (110 Ohms is specified for DMX), and including XLR connectors on the D-Fi encourages the bad practice of using mic cable for DMX cable.

However, a few minutes with a soldering iron and some DMX cable solved that issue; I simply made up some 3 pin to 5 pin adapters to properly interface with my lighting board and dimmers. Once I had cabling out of the way, setting the units up couldn’t have been easier. Simply set the dip switches to a matching frequency, pick one as transmitter and one as receiver and you’re done. I placed the transmitter up in the light cove above our tech booth, and plugged into universe 2 on our Expression 3. I placed the receiver on stage (about 100′ away, with no obstructions) and plugged into the dimmer. The lights indicated that I had a connection and after a little patching on the Expression, I was controlling lights on stage. It was that easy.

One thing I noted is that the LEDs are very bright. As in annoyingly bright. I ended up placing a few pieces of gaff over the LEDs so they wouldn’t be distracting as they blink constantly when a link is in place.

We have used the D-Fi with our portable dimmers on for 2 weekends now, with excellent results. We also used them to save us some work running cable for a large mid-week event. Instead of running cable up a balcony to hit 3 Martin Mac 700s, we used the D-Fi. Again, it worked flawlessly. I couldn’t detect any lag in the issuing of commands, and looped cues that moved the lights around during walk in ran perfectly.

For that event, we connected the D-Fi to the output of universe 1, and looped through to 3 other lights on the stage. It was nice to be able to loop through instead of using a second universe and re-patching all the fixtures.

While I realize there are more expensive (and arguably better) wireless DMX units out there, the Chauvet fills the bill for what we need. The cost/value ratio is very high, and I would recommend it to any church looking to send a DMX universe from here to there without wires. Since it occupies the 900 Mhz space, the DTV transition is a non-issue. If I were touring, I might worry about the fragile nature of the power connection, and perhaps the antenna, but I’m not and I take care of my gear. If we go portable for a while next year when we plant, I will be using this every week for sure. Otherwise, it’s a handy problem-solver to have at a reasonable price. This one gets the Church Tech Arts seal of approval.