If you didn’t guess today’s topic based on that fantastic pun for a title, we’re talking about one of my favorite pastimes: Soldering. More specifically, making your own cables. I think I bought my last pre-made audio cable about 15 years ago. Since then, I’ve made all my own. Mic cables, speaker cables, instrument cables, even patch cables and patch bays. If it carries audio, I’ve made it. I don’t think I’ve ever attended a church for any length of time and not ended up making audio cables.

For today’s post, I’ll talk about why I make my own cables and what my favorite raw materials are. Upcoming posts will illustrate proper connection methods for various cable ends (1/4″, XLR, Speakon, even BNC). But first…

Why make your own cables?

I give several answers to that question. First, I like to control the materials I use. Building my own allows me to specify the cable, the connector and how they’re mated to one another. I have my favorite cable types for different applications (see below), and I really don’t like the cable they use in cheap music and instrument (MI) store cables. It doesn’t coil well, doesn’t feel good and doesn’t last.

Second, I like being able to control length. For example, in our current Upper Room setup, we have need for a bunch of 1′ mic cables to run between DIs and our sub-snake. Those are easy to make up. We also needed some 8′ cables for vocal mics. When I’m doing an installation, I like to make my cable exact length. It neatens the install, and makes it far easier to work on later on (and by exact length, I mean point A to point B, plus a service loop if needed). I’ve seen a stack of IEM transmitters sitting next to a mixer, literally 2′ away, all connected by 25′ cables. I wish I was making this up.

Third, there is significant cost savings. Whereas a high-quality 20′ mic cable might cost $30 or more, I can make that same cable for half that, and it only takes me 5 minutes (when I’m making more than one). If you only need 2 cables, making them yourself might not save you any money (though the first to arguments apply), but when you’re doing 10 or more, the cost savings really add up. And when you start looking at multi-channel cables, the savings really take off.

I’ve been buying nearly all of my connectors and wire from the same place for over 10 years. Markertek has a great selection of both (and a whole lot of other stuff), they ship fast and offer great customer service when needed. They’re prices are also hard to beat. I compare others every so often, and they remain competitive. You may be able to find a local source for these parts as well, but I find it easier to hit the ‘net, place my order and wait 3 days for the box to show up. Takes a little more planning, but I also stock standard components and cable in my office for emergencies.

So here’s what I like to use. For mic cable, it’s Mogami 2792 all the way. It is, hands down, the best mic cable made. It’s great to handle, coils wonderfully and is exceptionally low on noise. Because of the unique shielding method (which we’ll talk about when we make mic cables), it’s nearly impervious to noise. I’ve run these mic cables right next to AC lines (I know, you’re not supposed to) and never had a hum sneak in. It’s also a great bargain at $0.49/foot as of this writing. Some people might like the Canare Star-Quad, but I hate it. It’s incredibly hard to work with, isn’t nearly as flexible as the Mogami and is more expensive. I’ve used literally thousands of feet of 2792 and never had a cable go bad (except for the one that got run over by the piano…)

For instrument cables, it’s Mogami again, this time 2524. Though I’ve been known to use 2792 for it because that’s what I normally stock, 2792 is low impedance, while 2524 is high impedance. For a low cost, permanent install cable, I will often turn to West Penn 291. It’s a little harder to work with than some of the Mogami console cables (2944 for example), but it’s often quite a bit cheaper. When I’m doing a ton of install lines, I’m not as worried about flexibility of the cable, so I don’t mind using 291. And the $0.10/foot (or more) savings adds up over several hundred feet.

When it comes to connectors, there are several to choose from. One thing I don’t do, and neither should you, is use any connector you bought at Radio Shack. They’re junk. And expensive. Don’t do it.

Now that we have that out of the way, for 1/4″ connections, I’m a Switchcraft man, all the way. Neutrik makes a good connector, but I don’t like assembling them. Their pads are too small, and they take too much time. And they’re big and expensive. Nope, give me a 280 for unbalanced lines and a 297 for balanced. I normally keep 10-20 of each on hand at all times.

For RCA, I won’t use anything but a Switchcraft 3502. Others make them, but I like Switchcraft’s. When it comes to XLR connectors, I’m divided. I was a long-time Neutrik addict, having soldered up literally hundreds of NC3MXs and NC3FXs. They also make a pretty trick IDC (insulation displacement contact) connector that doesn’t require soldering. You can throw on of these on the end of some 2792 and have a mic cable made up in about 2 minutes, and you don’t burn your fingers. But, I’m a cheapskate and they’re about a buck more than the solder ones. Not bad if you want 5, but I use a hundred or more a year.

As much as I love 280s and 297s for 1/4″, I’ve never liked (not even a little) Switchcraft’s XLR connectors. Sure, they’re strong, but they are harder to put together than a kid’s Christmas present. All those parts and little screws for the strain relief…yuck! However, a few years ago, Switchcraft won me over with their new AAA series. While there are 4 parts to an NC3, the AAA has 2. The pins are integral to the shell, and the strain relief is built-in to the back housing. Slide the housing on the cable, strip the ends, solder it up, screw it together and bam! you’re done. Two minutes an end, tops. Best of all, they’re comparably priced with the NC3 series.

I’ll still order NC3s if the AAAs are out of stock, but when I can get them I use AAAs. Always get the metal housings, too. Don’t cheap out and try the plastic to save a few cents. You will be disappointed.

For speaker cables, you can’t beat the Neutrik Speakon series. Get rid of those 1/4″ cables on your wedges and go Speakon. You’ll have a lot fewer monitors coming unplugged accidentally… 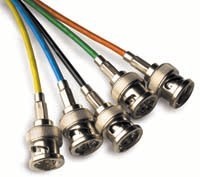 Later, we’ll talk about making video cables, too; so I’ll throw in a plug for those parts. Again, I’m sold on one type of connector that I’ve used thousands of times. Kings 2065 series is the way I roll. You have to get the right connector to match your cable, but that’s not hard. I keep things simple and stock one cable, Canare LV-61S RG-59, and one connector 2065-7-9. LV-61 is the 2792 of video cable.

So there you go. Order up a mess of those connectors and a few hundred feet of cable and we’ll get going. Onward, Christian Solder-ers!