Though I had to leave a day early, WFX was a wonderfully helpful conference. First, it was great to hang out with Colin Burch of FaithTools (and one of his volunteers, Erik). We had a lot of fun together; it’s always great to meet with other tech guys and hear their stories and passions. I also got to meet up with Brian Davis for a little while. Brian introduced me to a few other people I knew of but hadn’t met, and some new friends (Anthony, Kirk and Mark). I really enjoy networking and meeting new people, and putting faces to names/twitter photos.

I will be recapping the conference in more detail later, but for now, I thought I’d run down some of the cool gear I saw at the Expo. This is in no particular order, just remembering it as I think of it. 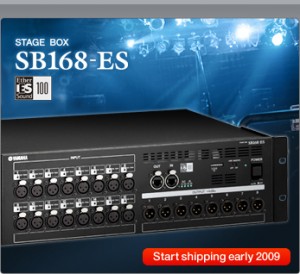 There’s a lot of momentum toward digital audio transport right now, and Yamaha finally got on the bandwagon. With the introduction of the SB168-ES, the now have an Ethersound-based solution. The 168 is essentially a 4 space high rack mountable box with 16 inputs and 8 outputs. By connecting to an Ethersound MY card, you can now transport audio back and forth over a single ethernet cable. The channel count will depend on the board in question, but even the lowly LS-9 could do up to 32 channels bi-directionally. The stage box is expected to be shipping in January and retail for around $3,000, give or take. 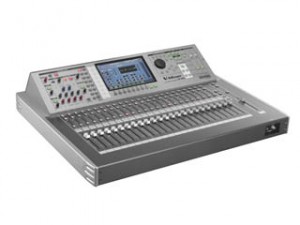 Regular readers of this blog will know I’ve been really big on the V-Mixing system of late. I had some really good conversations with several reps and a fair amount of hands-on time. I came away even more impressed. The interface is really usable, the sound is great, and I’m completely enamored by the price point, considering the ability to transport 48 channels bi-directionally. The board has a great feature set, solid options for stage boxes, and some new things in the pipeline that I can’t talk about (I was sworn to secrecy). I will say this; some of the new stuff will be potential game-changers and I will be holding off placing orders for UR’s new system until it’s officially announced early next year. I just wish I could tell you about it!

LEDs are the wave of the future. Every lighting booth was full of them. The technology is getting a lot better, and the feature sets are growing. I saw one moving head fixture that could zoom from 8-12 degrees, with full RGB color mixing. The color purity is getting much, much better, and there are more options than ever. Best of all, they draw substantially less power than conventional lights, with nearly the same output in many cases. While we won’t likely be replacing any of the really high-end fixtures like a Mac 700 with an LED unit just yet, for many applications, they are the bees knees. Depending on what we end up doing with the UR plant next spring, I will be looking hard at these. Here’s a sample from Elation.

I stopped by the Kramer booth to look at their video over UTP (Unshielded Twisted Pair) products. I’m looking closely at these for sending video from our presentation computer to the projectors because CAT-5 cable is a lot cheaper and easier to use than a VGA or DVI cable once you get past about 25′. I wasn’t sure of the quality–until yesterday. They were sending full 1080i video over 300′ of CAT-5, and it looked amazing. No skew, now color shift, no blurring. It looked like high-def video. Best of all, the products are very affordable. These deserve your attention if you’re dealing with projector runs, digital signage, overflow rooms or any other long distance video application.

There’s more, of course, but that’s all I’ve got right now. Over the next week or so, I’ll write about some other cool stuff I came across.

One of the coolest things I got to do was sit in with Colin Burch on the FaithTools Live from WFX podcast. We were also joined by Eric, a volunteer from Colin’s church. Look for the episode in a week or so. 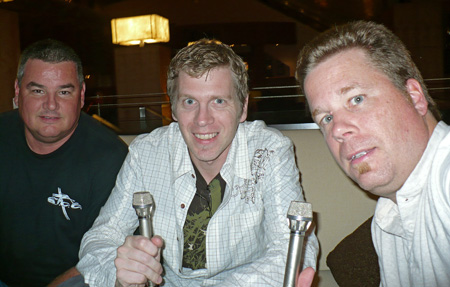 Dave Ferguson of Community Christian Church spoke at the keynote. He gave a great talk on innovation, and the set looked sweet as well. I believe many, if not most, of the lights were LED fixtures. The colors popped and the intensity was right there.

Oddly, in a conference devoted to worship facilities and worship technology, there were a host of technical problems. All the videos appeared to be running from Windows Media Player. I could tell because the play bar appeared at the beginning of every video. I would have gladly lent my MacBook Pro running ProPresenter if they had asked. Also, it was odd that one of the cameras for IMAG appeared to be shuttered at 1/15th of a second. The other one was fine, but every time they switched to the medium/wide shot, there was a shutter effect. Could have been 24p, but it looked shuttered. What’s up with that?

And there were several times when Dave asked for a graphic and it wasn’t there. Or it would pop up after he went on to another point. Made me feel really good about our presentation team.

That’s not Dave. That’s some other guy. Just wanted to show the set.

I’ve got a lot more for WFX recaps, but that’s all for now. Stay tuned!