This post may be considered a bit off-topic by some, but I operate under the assumption that geeks are geeks and we like to learn about technology of all kinds. And since I’ve assumed the IT Director role in my job, my time is now divided between A/V and IT related tasks. So I thought I’d write a little about my new experiences in setting up our server.

As Upper Room prepares to launch off on our own, we needed to set up our own server. Since all but 2 staff members were Mac users already, it made sense to go with Leopard Server. Now, I’ll put a little disclaimer out there right now: I’m not a hard-core Sys-Admin type of guy. I’ve been networking computers, installing premises wiring and setting up peer-to-peer sharing for over 20 years, but I’ve done precious little server admin. This was another strong driving force for choosing Leopard Server over a Windows Small-Business Server. So no hate mail from command line commandos, OK? 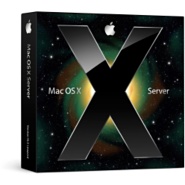 First, let me run down our equipment list. My original plan was to go with an XServe, largely because it comes with the unlimited client version of the server software already on it (a $1,000 value). However, when I looked at it more, the cost of adding anything to the XServe is more expensive because it’s a 1 rack space unit, and that compact size is costly. For example, AppleCare for an XServe is over $700 (at non-profit rates!). It only has 1 full-length PCI-e slot. Drive bays are expensive and can only be sourced from Apple. In the end, I came up with a better plan.

We already had a 2.66 Ghz Quad-core Mac Pro as our edit machine. I found a 2.8 Ghz 8-core MacPro on Apple’s refurbished site for $2,400. I swapped out the 8 core for the Quad core and now I have a faster edit station and a solid server platform. I installed a HighPoint RocketRaid 3522 hardware RAID card in the Mac Pro and connected it via Mini-SAS cables to an Enhance Technologies M8 8-bay SATA RAID enclosure. I filled that up with Western Digital RE3 Enterprise-Class 1 TB drives and configured it in a RAID 6. That gives me approximately 6 TB of online storage that can survive 2 drive failures without data loss. Cool!

I also dropped in a FirmTek e-SATA card to connect a SansDigital e-SATA 2 bay enclosure for off-site backup. This part has been a bit problematic, as the first SansDigital enclosure died after 2 days. I’m still waiting for a replacement (Directron.com is not on my recommended vendor list, in case you were wondering). I have  1 TB and 1.5 TB drives ready to go in the e-SATA enclosure whenever it comes back. Just because I can (and it was cheap) I put three identical Seagate ES-2 250 Gig drives in the MacPro. Two are configured as a RAID 1 and act as the boot drive (RAID 1 means 2 drives that are mirrored, so all data is written to both all the time). The third is yet another backup of the boot drive, which is cloned every night using SuperDuper!. My theory was this; in case the server MacPro dies, I can pull that drive sled out, pop it into my edit MacPro and be back online in a few minutes. Plus, it was $52 to get another copy of the boot drive, so why not?

The system is rounded out with an Astaro HD-120 Security Appliance (firewall/gateway), a NetGear 16 port gigabit switch and an Airport Extreme for wireless access. I’ll say right now that the Airport is wicked fast. If we didn’t already have the new office wired for gigabit access, I would skip wires altogether.

Speaking of fast, I ran BlackMagic’s HD speed test on the hardware RAID and got read and write rates of 160 and 180 MB/sec respectively. To say I’m happy with that performance would be an understatement, especially when it’s configured for safety, not speed. So that’s the hardware. Tomorrow I’ll talk a little about what it was like to actually get the system up and running.