Reader Question: LCD TVs on 24/7–Good Idea or Not?

Here’s another one from the virtual mail bag. Don in Ohio writes:

I’m an avid reader of your blog. [Always point out you’re an avid reader of the blog, it pretty much guarantees I’ll answer ‘;-). mike] I am the Worship Minister and guy over the tech area at our church of about 800.

We recently got LCD tvs in our lobby and we leave them on 24/7. I know the technology has improved a lot in recent years and in the past there have been issues with plasmas degrading over time, which was why the recommendation was to turn them off to lengthen the life of them.

Well, these being LCDs, I don’t really see the need to turn them off. I have had a few people mention to me that we should have them on timers to turn them off at night.

Is this worth it, in your opinion? I think the TV would become obsolete or something before we would ever run the life out of them by leaving them on.

Well Don, I’m happy to share my opinion, though I question myself on how professional it is. Here’s what I’ve come up with. 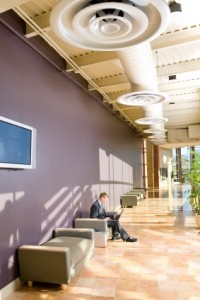 After doing a little research, I would recommend turning them off at night (and probably more often than that, actually), but perhaps not for reasons you might expect. First, as to the lifespan of an LCD panel; most are rated around 60,000 hours of use. Left on 24/7, that works out to about 6.8 years. So your point is well taken that they may be “obsolete” before then. On the other hand, they may not be. I have  broadcast CRT monitor that’s over 15 years old, and still useful, at least for another year or two. Even turning them off for 12 hours a day would double their lifespan, and pretty much ensure that we’ll be on to another video standard before they burn out. Also, remember that while the panels are LCD, the light sources do degrade over time. As the backlights grow dimmer, the color will start to shift. You may have to replace them sooner than you’d like simply because the color is no longer accurate.

While lifespan alone is, in my opinion anyway, enough reason to turn them off for at least 12 hours a day; another, perhaps larger reason is electricity usage. Without knowing what TVs you’re using, it’s impossible to get this right on the money, but I’m taking an educated guess. A 42″ Sharp LCD TV uses 235 W of electricity, which works out to 5.6 KWh a day. At roughly $.09 a KWh in Ohio, you’re burning $.50 a day, per TV. Turn them off for 12 hours a day, and you save $.25 a day–which isn’t a big deal, though it does add up to $90/year per TV. Again, if you have 1, it’s not that significant If you have 5 or 10, it starts to add up.

Additionally, one could argue that leaving them on 24/7 is plain wasteful. Sure the cost isn’t really that much, however, it adds up to electricity that doesn’t need to be generated. Regardless of one’s views on global warming, it seems to me that as Christ-followers, we should be leading the way of be good stewards of the planet we’ve been entrusted with. Leaving TVs on all night in an empty lobby (or all day if it’s still empty) hardly strikes me as being a good steward.

So if it were me, I’d either set them up on a timer to turn them off for half the day, or turn them on only when they’re actually being used. I see a lot of church lobbies that sit empty during the week, so you would likely win even more “green” points for turning them on only when needed. Personally, I think it’s time the church stand up and lead the way on issues of conservation. That’s my opinion anyway. Thanks for asking!