It’s been a long week of construction. Every time I have an occasion to spend a week with a toolbelt on, I’m reminded of two things: First, I really enjoy building things; and second, I’m really out of shape. Back when I was doing construction full-time a few years ago, I felt fine after 10 hours on my feet. Now, not so much. Of course, my kids keep reminding me that I’m also getting old…

Anyway, I wanted to post some pictures to show you, loyal reader, what we’ve been up to. Monday, we made great progress on stage platforms. Tuesday we set out to design and build the drum booth. I normally don’t like to design projects at Home Depot, but that’s what we had to do. Part of the design requirement was to make it easy to disassemble and move. That led to a few challenges.

Ideally, a drum iso booth would be heavy and completely air sealed. A heavy, air sealed booth could not, however, be taken apart easily and moved. So we had to compromise. The final design is pretty good-sized; 6’x8′ inside. In fact, it’s so large, I’ve started calling it the drum condo. The two back sides (that won’t be seen by anyone) are skinned with 3/8″ plywood, fully glued to a 2×4 wall. The front two sides have 3’x6′ plexi windows. The rest of the walls were skinned in 1/4″ luan, then sided with 1×4 pine to mimic the wall treatment in the rest of the room. All of the wall cavities are filled with fiberglass insulation and covered with linen.

The roof is made up of an inner frame made from 1×4 and an additional outer frame, also of 1×4. The frames are skinned with 3/8″ plywood. The channel between the inner and outer frames slips over the walls and locks them together. We’ll put some 5/16″ foam gasket in that channel to further air seal the top plate/roof junction. We made the roof in two sections; those are joined by a elongated U shaped piece of 1×6 with gasket material on the underside. Next week, we’ll be putting 3″ Auralex wedgie foam on the inside of the roof to deaden it up.

The good news is that aside from the long front wall (which is seriously heavy), it’s all pretty easy for 2 people to move around. What I don’t know is how effective it will be. I suspect it will be a work in progress for a few weeks as we find better ways to seal it up and deaden the sound. I am pretty sure it will be better than just having the drums out in the open, however. If I had my druthers, I would have preferred to make it more permanent, heavy and better sealed. As it is, it will be an improvement. We’re also working on a design for a “skate;” a set of wheels on a U-shaped bracket that we can use to move the walls around easier.

We also built a tech booth yesterday. The original design called for a straight 10′ counter, but some quick work (to scale) in Illustrator indicated that our gear wouldn’t fit. So we changed it up and made it a 12′ ell. The extra length and the ell give us the ability to put the mixer (an 01V) in the corner, and still have space for some rack gear. The outside was also sided with 1×4 to blend in with the room. Kevin, Justin and Zach worked hard on that booth all day long and did a great job.

Next week,we start the fun stuff; hanging lights and speakers, wiring and starting to program. Here are some photos of our work to date. 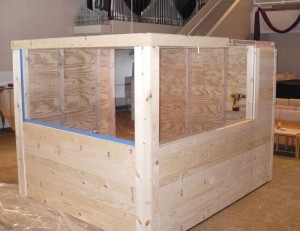 The Drum Condo. This was the first test fit of the front roof section. It fit! Click to enlarge. 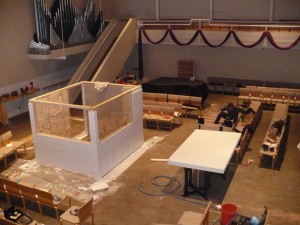 This gives you a good idea of how big the condo is. Nice having a sanctuary that converts to a workshop. Click to enlarge. 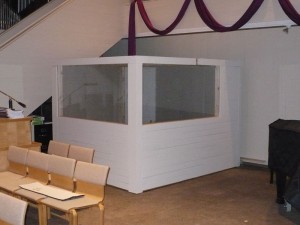 The condo pretty much in place. It really blends in nicely. The seam on the roof is covered with a 1×6 channel. Click to enlarge. 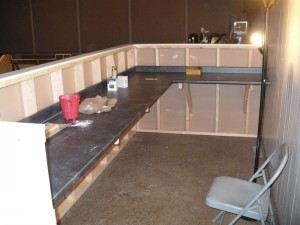 Tech booth. We left the inside open so we can easily drop cables over the counter to below. Click to enlarge. 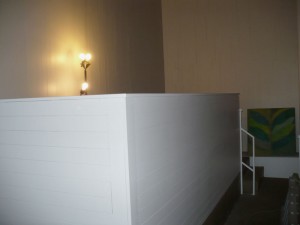 Tech booth sided with 1×4 to match the room. It really looks good! Click to enlarge.