Fresh on the heels of our drum mic’ing webinar, I thought I would post some details of our now famous “Drum Condo.” Perhaps ‘now famous’ is a slight overstatement; still, I’ve talked enough about it that I thought it merited a post. If you’ve read this blog for more than a month, you know that before I would put pencil to paper to sketch anything out, the first thing we would determine would be our design goals. If you don’t know what the goals are before you start any project, you have no idea if you’ll be successful or not. In this case, we had some pretty clear goals.

That was pretty much it. It was with those goals in mind that I began sketching these plans. Actually, our worship pastor, Jon, came up with the original drawings. His design was similar to what we ended up with; I made some modifications to it, and drew up construction plans. These are my actual drawings, made at Home Depot the morning we started the project. This is not my ideal design scenario, but it’s what we had to work with. On that morning, we were 12 days away from the first serivice in the new space, and we hadn’t even started A/V install yet. Click on any of the images to enlarge. 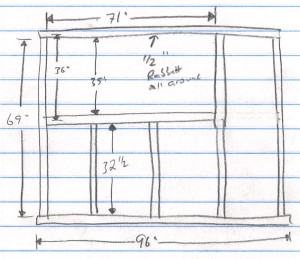 The Main “Front” Wall of the Condo. 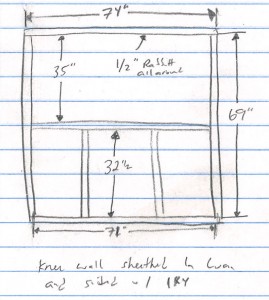 The Main “Side” Wall for the Condo 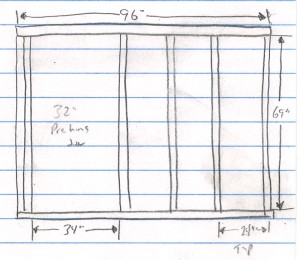 The Back or Entrance Wall 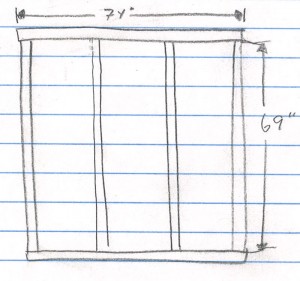 The Back/Side WallThat’s pretty much what I came up with in a few minutes. I’ll go on record as stating that I’m no expert in designing drum enclosures. And one could argue that a rectangle is not the optimal shape for such a “building.” However, one of our design goals to was to make it look built-in. And the rectangle shape certainly does in this room. While we probably could have added angles, it would have added complexity, time and made it difficult to achieve our other goals.

As far as materials went, it’s pretty standard. I’ve done a lot of design/construction in other lives, so I stuck with basic 24″ on center 2×4 walls. The two least visible walls (the Back/Entrance wall and the Back/Side wall–we never really know which side is the “front…”) are sheathed in 5/8″ B/C plywood. To increase stiffness and make sure it was as air-sealed as possible, we put a bead of PL Subfloor Adhesive down on every stud and the top and bottom plate. We squared it up and stapled the sheathing down with a 1/4″ narrow crown stapler.

The back wall is extremely light and stiff. For the entrance wall, I decided that taking a simple 32″ prehung hollow-core door and cutting it down would be the easiest. We framed it up with that in mind. That wall is also pretty light. The other two walls were more complicated.

Both remaining walls needed plexiglass windows in them for visibility. We went with 1/4″ sheets 36″ x 72″. I framed the openings 1″ smaller in both dimensions and used my router to create a rabbet for the plexi. We set the plexi in place in a bed of clear 100% silicone adhesive. The rest of the wall was skinned in 1/4″ luan underlayment–which seems odd at first. We did this mainly for air sealing. We followed the same procedure as on the other two walls, a continuous bead of PL and staples. Looking back, this was probably overkill, but it really didn’t add much weight, cost or time, so I don’t feel bad about it.

To finish the walls, we “sided” them (for lack of a better word) in 1×4 pine. We chose this because that’s what the interior walls of the sanctuary are covered in. Remember the goal–make it look built-in so we don’t have to move it every week. These two walls are heavy.

The corners were made in such a way that the 1×6 and 1×8 vertical trim pieces overlap the adjoining wall and create a nice visual and air seal. Each wall is affixed to it’s neighbor with a simple eye-hook fastener; the type you might use to keep a screen door closed.

So that’s the basic frame of the condo. Tomorrow, I’ll talk more about the roof and how we finished off the inside. The next day, we’ll get to what’s really important–how it works!