Since many people have been asking, I finally did get around to snapping some more pictures, including the inside. I also took some SPL readings to confirm what I suspected. First, hard data. I walked inside the condo and had Joe play at his normal volume. We got readings around 116-118 dB SPL, C-weighted, fast. Then I went outside and stood about 6 feet from the condo. I didn’t have anything in the PA, and got readings around 88-90. So it looks like we did hit goal! Moreover, the readings don’t really do the attenuation justice. I had a quick conversation with our worship pastor after the readings, and we both talked at a normal level (which would be around 70-ish) and didn’t strain to hear. So my guess is that we’re getting a lot more attenuation at higher frequencies, which is really where we need it. The low stuff is really hard to block, and that’s probably still getting through. However, it doesn’t affect the balance in the room, so I think we did good.

Since I was on FOH duty this past weekend, I got to mix in the room for the first time. All I can say is, Wow!. It’s such a treat to mix on a system that actually responds to the changes I make–I’d forgotten what that was like. Our previous venue was quite awful; honestly I grew used to how bad it was. The new place is a breath of fresh air. I had full control of the drums in the mix and was even able to get some different sounds out of the snare for different songs by playing with the balance of top and bottom mics. Even little changes made a difference, which is exactly what you want. The room is still muddy at the low end, and we’ll switch back to aux-fed subs before too long, but I’m very happy with the results of the condo.

With that out of the way, let’s look at some pictures! 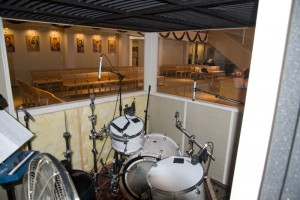 A few inside. As you can see, we ran out of linen fabric. Need to get that done… 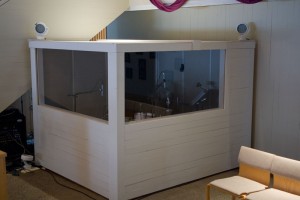 All finished!Obviously, we’re missing a few drum parts in the top picture. One of our drummers leaves the main kit there and the guys bring the snare and brass back and forth. In the foreground you’ll see our proprietary “drummer heat reduction unit.” This week Joe reported that he was quite comfortable in there.

Finally you get a picture of the outside all done. If you look closely (click to enlarge), it looks just like the walls. And even the piece that connects the two top halves looks like it’s meant to be there.

So that’s it. Last post on the drum condo, promise. Unless I get hit with a bunch more questions. Then all bets are off!