Run Windows On Your Mac–For Free!

If you’ve read this blog for more than a week, you’re probably aware that I’m a pretty hard-core Mac user. In fact, I’ve been using them longer than some of you have been alive (23 years, and counting!). As much as I love my MacBook Pro (and my MacPro) and the latest version of the OS, sometimes I admit I have to use Windows. It’s the only way to control the M7; it’s how I have to configure our Biamp Nexia system processor; and it’s how I have to set up the Extron switcher.

In the past, I’ve used Parallels (v. 2–didn’t like it, though I hear v. 4 is much better) and VMWare’s Fusion (big fan). But now that the Release Candidate of Windows 7 is out, and is free for almost a year, I thought I’d give another platform a try. I heard about Sun’s Virtual Box on MacBreak Weekly with Leo Laporte. I was intrigued. He claimed it was every bit as polished as Parallels or Fusion and was (wait for it)…Free! So I thought, why not?

This past Sunday, I had an hour to kill before heading in to church. So I downloaded and installed Virtual Box. That was pretty easy. I then set about downloading Windows 7 RC (it’s a 2.36 Gig file, but it only took about 20 minutes). I should point out that it would not download using Safari. Probably an evil Microsoft conspiracy. Using Firefox, it worked just fine (thanks @davidgohome). Installation was pretty straightforward. Win7 shows up as an ISO image, and I plunked it on my Mac Desktop. I created a new Virtual Machine in Virtual Box (VB) and told it I would be installing Windows Vista (Win7 is not on the list yet). I pointed it to the ISO image and said “Go.” 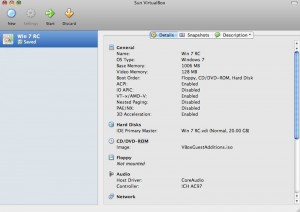 Virtual Box gives you many configurable options, just like Fusion or Parallels. Only free.At that point, I got a little worried. Every Windows installation I’ve ever experienced has taken hours. Plural. I wondered if I would have to bail on this before I had to leave… Thankfully, it was not the case. In fact, Win7 installed in VB in under 20 minutes. Shocking. 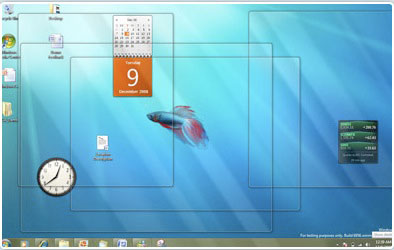 The new “invisible windows” featue. I hope the fish doesn’t die…I booted up Windows and configured my account. I was in. Wow… that was easy! I’ve been playing with it on and off for the last few days and I have a few observations. First, VB is good, but it’s not quite up to the level of Fusion. While it does capture the mouse automatically, I can’t switch Spaces if I’m in VB (at least not using the keyboard). Fusion’s Unity view is better than VB’s Seamless view, and shared folders worked a lot faster in Fusion.

In fact, it took me a good 2 hours to get shared folders to work and I had to resort to the command line in Windows to do it. Setting them up in the VB app is easy, just select Shared Folders and tell it which Mac folder you wish to share, give it a name and you’re set. Except I couldn’t get Win7 to see it. After mucking around in the “notes to myself” documentation, I came across a command to map a VB shared folder to a network drive (net use x: \\vboxsvr\sharename where sharename is the name of your shared folder). After that, all was cozy.

As for Win7, I will say it’s the least annoying version of Windows I’ve ever used. It runs reasonably fast on my 2.0 Ghz MacBook Pro (I’m allocating 1 Gig of RAM to the VM). The graphics look crisp and gone (finally) is the Fisher Price look of XP. So far, I’ve installed Studio Manager, the Nexia software and Open Office. All work as advertised.

At the end of the day, the Win7 and Virtual Box combo is quite serviceable. If I had to choose between Fusion at $70 and Virtual Box at $0, I’d take Virtual Box, as it would suffice for what I need to do in Windows. However, since you can often get a $50 rebate when you buy Fusion with a new Mac, I’d spend $20 on Fusion for sure.

Windows 7 is significantly improved over XP and I will likely start using it more. I’ll also install it as a virtual machine in Fusion to see how it runs in there. It’s not going to make me give up my Mac, however. Still, it’s free until March 2010, so what the heck. Give it a shot.