Those of you that follow me on Twitter probably remember that a few weeks ago someone on the creative team had the idea that we should have a porch in church for one weekend. It actually makes more sense than it sounds at first; our theme for the weekend was The Front Porch: Practicing Hospitality. It was part of a series called Renovation: Turning Our House Into A Home. We’ve been talking about different “rooms” in a house and using that as a jump-off point for a given theme.

Anyway, we thought it would be good to have a porch as a visual metaphor for what we were talking about. The trick was that it had to actually support people. And be repurposed later. My initial “in my head” design was going to be really simple. A quick 1×4 deck skinned in luan, punch some 4×4’s through to raise it up and make into posts for railings. Simple and easy.

Then they said that they wanted people to be able to come up on the porch and write on it. They also wanted to re-use the deck portion of it as a teaching platform down the road. That made things a little more complicated. First, the “legs” needed to be removable from the decks. Second, the whole thing needed to support perhaps half a dozen people per section. Third, the entire assembly could not rack and collapse. And it needed to look like a porch.

Off I went to Google SketchUp. First off, I should note that if you haven’t played in SketchUp, you really should. It’s free after all, and it’s a great way to design things in 3-D. I’ve been playing with it for a few months now, and really like it. It has some quirks, but hey, it’s free. I’ll also point out that after doing the design, cut list and material list, we went to Home Depot and bought material. When all was said and done, we had an incredibly small pile of cut-offs, 1 extra 2×4 (which I bought just in case) and didn’t have to make a single trip back for more material. There’s some real benefit to planning ahead. 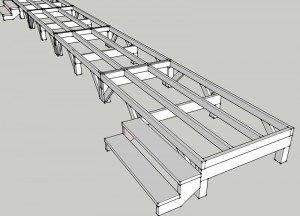 Everything was designed to be easily assembled and disassembled. click to enlargeThere are 4 “deck” sections, assembled out of 2×4’s, glued and nailed together. I then used construction adhesive and screws to secure 3/4″ plywood to the framing. That gives me a 4 1/4″ high “platform” once they’re repurposed. Perfect. The legs were built from 4×4 douglas fir posts, 2×6 girders and 2×4 diagonal bracing. Because the entire thing needed to come apart afterward for storage, I used various angles and plates from Simpson Strong-Tie. Great stuff that. I hand-cut the stair stringers out of a 2×10, and used 2×10’s for the treads. This was the finished plan. 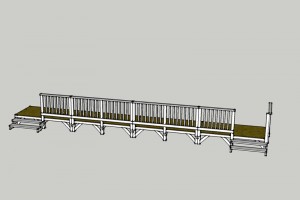 What it was supposed to look like. click to enlargeThe railing is just 2×4’s and 2×2’s glued and nailed together. I used PL Premium construction adhesive for everything because I wanted it to resist racking and hold together if someone leaned up against it. The railing is designed to meet code, just because I’m a geek.

So those were the plans. As often happens, the best laid plans run into a small snag. When we started setting platforms in place, it became clear we didn’t have quite the run length in the room we thought we did. We were about 4′ short, in fact. Someone suggested turning one of the platforms 90 degrees and running the stairs off the end. We tried it and it worked like a charm. 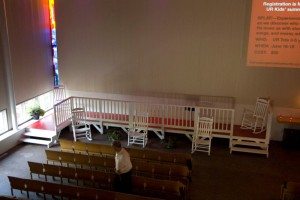 I don’t know who the guy is, but I could not get him to stop walking back and forth in front of the porch. click to enlargeWe set rocking chairs there to make it more porch-like. In this design, it worked exceptionally well. The short ell created by turning a platform gave people a little more room to move around each other, and gave us a nice corner to set a rocking chair. Here’s what it looked like during a service. 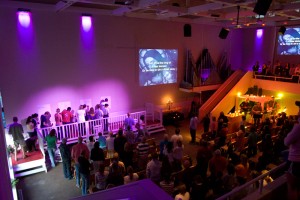 Even with a dozen people on it, the porch didn’t move an inch. click to enlargeEveryone was quite pleased with the final result. It took a couple of long days to build and paint, and we had some great volunteers come in to help with it. And now we have a few teaching platforms that will make it easier for people in the back of the room to see the teacher. It’s what we call a win-win-win.