The other day I was completely sucked into a preview of  Google Wave. I heard about it on Twitter, went to the site with the full intention of watching the first 20 minutes or so then going on with my day. An hour and 20 minutes later, I was staring at my screen, shaking my head saying, “Wow!”

If you haven’t heard of Google Wave yet, don’t fret–it’s not officially out. It’s still in development, but I think it holds tremendous potential as a communication platform for the Church. What is Wave? Well, it’s hard to describe. It’s kind of like e-mail, instant messaging, collaboration, white boarding, media/content publishing all rolled into one. The concept revolves around a Wave, or threaded conversation. The Wave can be an e-mail-like conversation, or an IM, or document. The demo showed off some really cool features for collaboration and publishing. 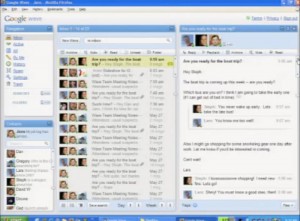 What a basic, e-mail-like Wave might look like.click to enlargeI was really excited about the ability to create a Wave, use an API to publish it in a blog, then update the blog from the Wave, and the Wave from the blog. It’s a real “write once, publish multiple times” platform. It’s also open-source, and they’re inviting people to develop gadgets for it. 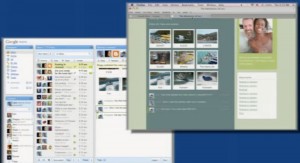 It’s easy to integrate a Wave into a blog, then push changes right up to the blog in real-time. click to enlargeAs I was watching the demo, I immediately thought of how cool it would be to use this for collaboration on creative ideas for a church with satellite campuses. Rather than “replying all” on a big e-mail, a Wave could be used to track and develop a service plan. One cool feature was the ability to add people to a Wave already in progress. When the new person comes in, they see the current state of the Wave. However, if they want to see how it got there, they can use the playback function to see the original, and all subsequent additions.

Like in Google Docs, when multiple people are editing a Wave, the changes are reflected in real time. They actually have it working so fast it was updating pretty much at character speed; type a character and it appears on another users screen. Pretty sweet.

And, they have it running on mobile devices such as Android and the iPhone. This means you don’t need to have your laptop with you to stay up on the ongoing conversation. 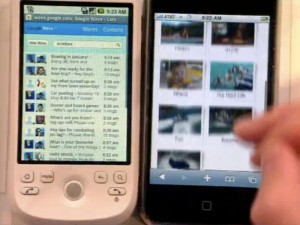 Waves running on Android and iPhone. click to enlargeThe demo was not only interesting, but entertaining (which explains why I was sucked in). There was a lot of humor, and the presenters, Lars Rasmussen (co-inventor of Google Maps) and Stephanie Hannon (Product Manager), made plenty of jokes when things didn’t go as planned–“OK so let’s take a look at this…fail spectacularly.”

Just watching it made me think of all kinds of cool uses for it. But you really need to see it in action to understand the power of it. Be warned however, the demo is addictive. You’ll spend 80 minutes watching, because you won’t be able to pull yourself away!