It’s been a while since I’ve talked about rechargeable batteries. Mainly because there was no new news with the Ansmann brand we had been using, and I wanted to try out the new ones for a while before giving an update. Thankfully, the wait was worth it, and this is good news.

When Upper Room moved into our new space, we ended up with Shure ULX-P microphones. They’re decent mics, and require 9V batteries. This didn’t thrill me as I was hoping to go with AAs as their energy density is a lot higher. But 9Vs it is, so I looked to find the best ones I could. I like the Ansmann rack mount chargers, but at $450+, they were out of the budget. And I don’t like their little 10 bay desktop one. I’ve used it before and it’s not well made. My search ended when I found the Maha MH-C1090F at Thomas Distributing. At just under $50, it fit the miniscule budget. Thankfully, it does not disappoint. One of the problems with the Ansmann desktop unit is the contacts are made of cheap metal, deform easily and then don’t properly contact the battery. The Maha seems much better made in this regard. The batteries snap in place well, and charge quickly. So our charger needs were met, what about batteries? 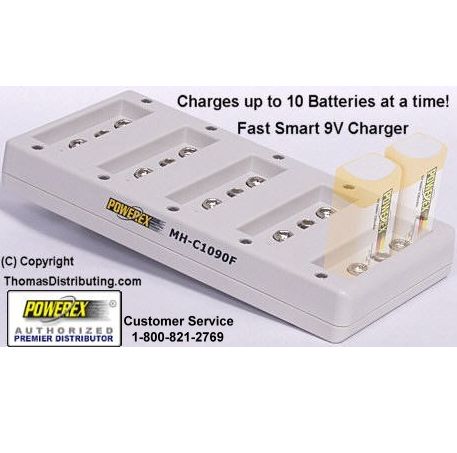 Maha MH-C1090 10 Bay 9V chargerAgain, Maha’s 300 mAH Powerex battery was the choice. It’s 50 mAH more capacity than the Ansmann’s we were using, and so far, they rock. Our speakers are good about turning on and off their packs and we easily make it through 2 sermons. In fact, the batteries have never dipped below 1/2 on the scale. I can’t see an instance where we would run out of juice, even running for 2 solid services. Your mileage may vary, but I’m happy with them. 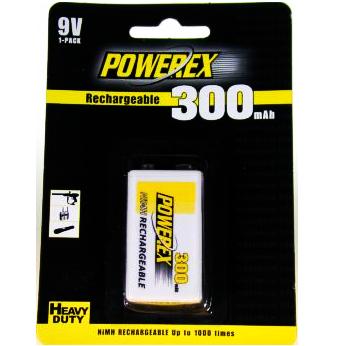 Maha 300 mAH 9V BatteriesI’ve not been using AA batteries at church for a while, but for my own tests, I’ve tried several at home in my digital camera. I shoot a Pentax K-100, which as it turns out, is pretty energy inefficient. It has a high current draw, and the Ansmann AAs can’t supply enough juice. They die quickly and decisively. Plus, if I left them in the camera for a week, they’d be dead on their own. Not what I wanted.

So I tried some Ray-O-Vac hybrid rechargeables. They are billed as a low discharge battery that comes fully charged. I found them to work OK. Better than the other ones, but nothing spectacular. So I tried Sanyo’s Eneloops. To say these blow me away is an understatement. I bought a set, dropped them in the camera in February and only took them out to recharge before going to California a few weeks ago. Now, I probably only shot a hundred photos in that time, but still–no self-discharge to speak of. When I pulled them to charge, they still read 1/2 on the camera meter. Not bad.

Sanyo Eneloop. Amazing.Last week, I was in South Dakota. I shot almost 400 pictures in 2 days. Again, no perceptible drop in performance with the Eneloops. I started carrying a few sets of Li-On batteries as backup, but have yet to use them.Though I’ve not used them in wireless mics, I can’t imagine they would be anything less than spectacular. And since they don’t really self-discharge, they wouldn’t need to sit in the charger all week long keeping topped off. [It should be noted that they do self-discharge, they just do it really slowly. If you’re in a good rotation, you’d never notice it.]

You can get Eneloops at a variety of places, but I got mine at Thomas Distributing. I also picked up a La Crosse BC-900 4 bay AA charger. It was highly recommended on photography forums, and I am also very pleased. It has a variety of charging modes and will charge 4 batteries in under 2 hours and 2 in under an hour normally. And at $35 (with a set each of AA and AAA batteries and a case!) it’s a steal. 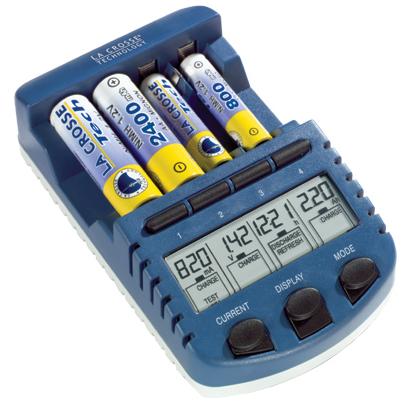 La Crosse BC-900 4-Bay AA & AAA charger.Note: My apologies if the links don’t work, Thomas Distributing runs sales all the time and the links may change. If you find a broken link, just visit their website and search for the item.