I’ve said it before; when it comes to rendering, there’s no substitute for horsepower. Typically that means upgrading to a bigger computer with more processor cores running at a higher speed (and more RAM–you can never have too much RAM). The downside of that approach is that it gets expensive really fast. For example, the new MacPro 8-core computers are blindingly fast, but they’ll set you back $6,000 in the fastest configuration. And unfortunately, they performance increase doesn’t equal the price penalty, especially when it comes to rendering. 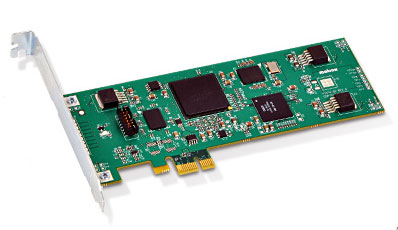 Matrox CompressHDEnter the Matrox CompressHD. It’s a half-length PCIe x1 card that fits into MacPros, XServes or PCs. It does one thing and it does it well; speed up compression of h.264 files. By offloading the compression process from the host CPU, render times drop to faster than real-time in many cases. Given the number of Twitter posts I’ve seen recently about waiting for progress bars to finish, this could be really useful. Check out these speed improvements (from Matrox’s website). 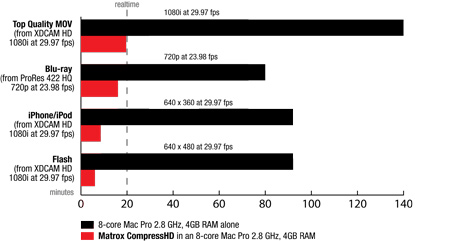 Seems like it’s just a little bit faster…The graph above shows the various times for exporting a 20 minute video. This would be huge if you post your services online (even the preaching part is going to be 30-40 minutes). How nice would it be to have them encoded in 5-7 minutes?

The CompressHD can be accessed right through the QuickTime framework, which means you can still use Compressor, FinalCut Pro or even QuickTime Pro for encoding. It ships with customizable presets to get you going quickly. The encoding station doesn’t even have to have a video card in it, so if you have an old G5 MacPro lying around, it could be repurposed as an encoding station. CompressHD supports Apple’s QMaster for distributed rendering as well.

Best of all is the price. I found it at B&H for $495. At first glance, this might seem pricey for a one trick pony. But given how much encoding we do in the h.264 format, being able to get it done quickly makes it easy to justify.

If you’re in a church where the video never needs to change an hour before the service, this might not be for you. For the rest of us, it could be a life (or at least a service) saver. And if you feel like you’re limping along on an older editing computer and can’t afford to upgrade to a new one, this could extend the useful life another year or two.

With the ever tighter integration between effects and editing applications, we’re quickly reaching the point where we really only need to render once. With a card like this in the computer, that render time just got a whole lot quicker.