Last week we kicked off a new series at Coast Hills. The title is Follow: Jesus on Discipleship. We kicked around a lot of ideas for the set design, and here is where we landed. 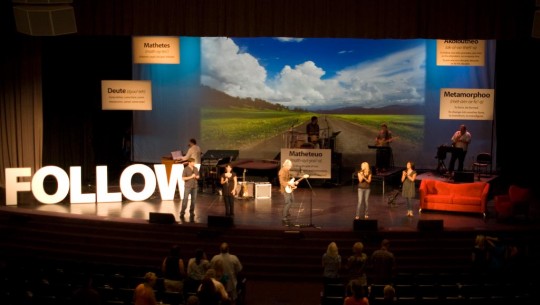 We intentionally went for a simpler look because the theme of the series is about getting back to basics and simply following Jesus. The letters for FOLLOW were made by a sign shop owned by a guy who goes to our church. They are 48″ high and 4″ thick. They are made from expanded polystyrene–the same stuff coffee cups are made up. We were originally going to have one side skinned with white paper to give a crisper look, but that became cost-prohibitive. 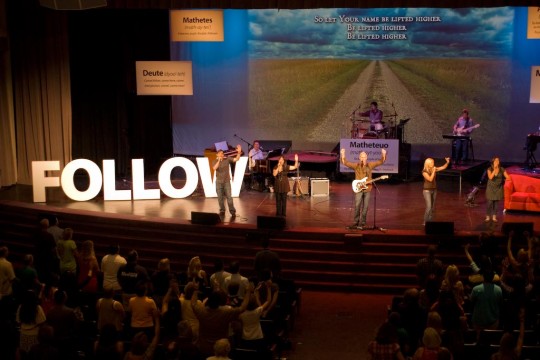 One of the challenges was to figure out how to keep the letters standing up and not get knocked over, or in the case of the “Os” have them rolling away. We came up with a simple solution: 1×6 pre-primed MDF. We sprayed it black so it would blend in with the floor. We drilled some pilot holes in through the bases and applied some construction adhesive suitable for foam. We used 3″ coarse thread drywall screws to screw the letters to the bases. Honestly, we were all surprised by how much the screws bit into the foam. We could strip them out easily enough, but if we were careful, the bases snugged right up. 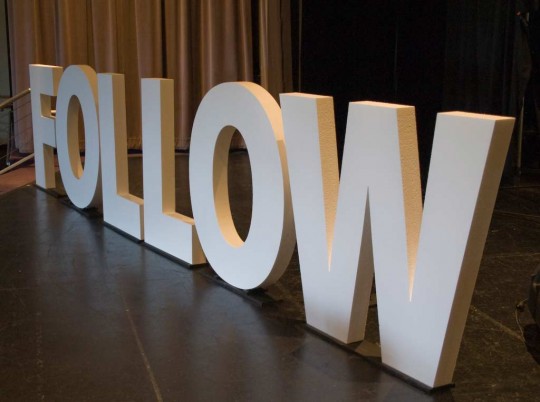 To stabilize the “O’s” a little more, we cut some small blocks and wedged them in the corners. I loaded them up with a good amount of adhesive to lock them all in place. After the glue set up, they felt pretty secure. The letters are a bit fragile, but we’re hopeful that they’ll last the entire 10 weeks. 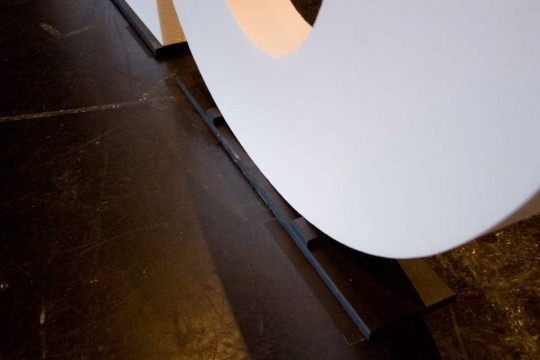 The hanging signs are about 42″x70″. We had them printed on white paper and mounted them ourselves to 3/16″ Gator Board. Gator is a little heavier than just foam core, and we chose that so the 40# test monofilament wouldn’t pull through over time. We suspended them from our lighting truss and lit them from the ground with some old Lekos I found lying around. It’s a little big ghetto, but it works.

One thing I did that I think will save me a few times was to mark the locations of each letter and each light on the floor with a strip of gaff tape. You can faintly see it in the picture above. That way when we have to move the letters around, or someone knocks over a light, we can get them back where they belong quickly.

We got a lot of compliments on the set this weekend. Props have to go to our Communications Director, Ken; our Presentation Tech, Holly; Volunteer Lighting Guy, Daniel and my boss, Todd for all the work coming up with this set. All I really did was figure out how to hang the stuff.