I’ve been in a series talking about our Christmas production this year. You can read the first two here and here. Today I want to talk about the most complicated 5 seconds of the show. The script called for the people of U (the village the show was set in) to gather in the town center around a giant pile of toys that were no longer good enough for the children. At a critical point, the heroine, Lindy would be saved from calamity by the villain, Gunch, as the pile of toys collapsed on top of him instead of her.

As I mentioned in the previous post, this gave us many challenges. How do you build a pile that would fall predictably and be easily reset? Next, how do you transport that pile from backstage to center stage? How do you tip it over, at the right time? And how can we employ some misdirection so the audience doesn’t see the mechanics? Oh, and how do you do it with a budget of about $50?

The answer was a cool story of accidental collaboration. My boss, Todd, who was acting as the producer of the show and I had been talking about it in various forms for a few weeks. One night, unbeknownst to the other, neither of us could fall asleep. He had an idea for the packages, I had an idea for the “toy tipper” as it became called. When we met the next day, we knew it would work.

First the toys. Todd reasoned that he could use a combination of zip ties and shock cord to create a connected tower of boxes (that would eventually be wrapped). Those boxes would have some give and look like they were loosely stacked; however, they would re-stack the same every time and stick together.

What I saw was a wheeled platform with a hinged back. The back would serve as a support for the toys as they were wheeled out, then push them over all at once in one direction. When I arrived at the office the morning after I designed it in my head, I launched SketchUp, Google’s free 3-D design software. Here’s what I came up with. 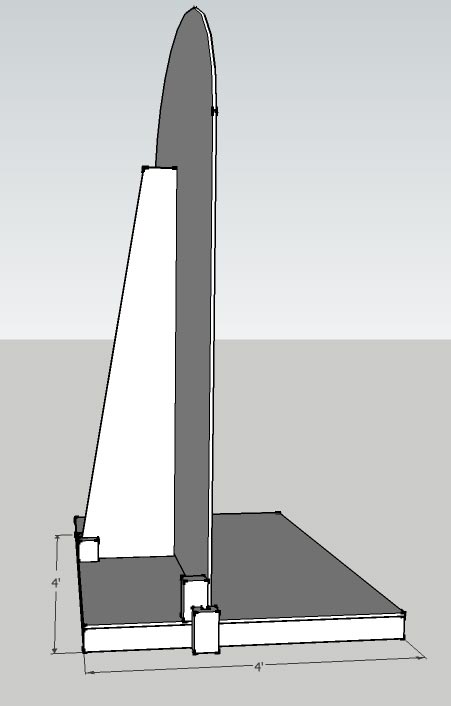 The original designThe base is a simple 1×4 frame with 1/4″ luan glued and stapled to it. The upright is 1/2″ plywood with a gusset/stiffener made from 3/4″ MDF. We could have used plywood for that, but I had MDF left over from the proscenium, so I saved a sheet. Under the deck, I placed some pieces of 1×8 cut on 45 degree angles. These served as the mounts for wheels. Todd had a good idea to tip the base slightly back to add more stability to the tower. To do that, I put the 1×8 at the bottom of the 1×4 frame in front, and at the top in the back. That gave it a slight tilt.

The hinge was the only tricky part. I originally planned the back to be removable, thinking that after it tipped over, the stage hands would carry the back off stage. It ended up being easier to just roll the whole thing away, so we modified it later. 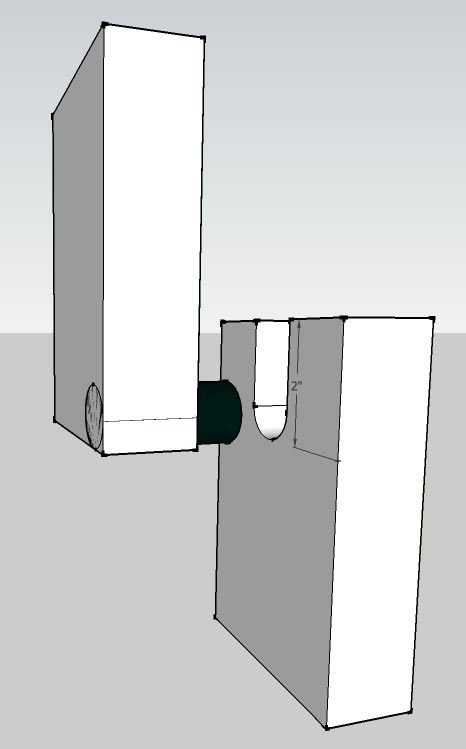 A basic hinge.The hinge is just two pieces of 2×4. One has a hole drilled in the corner to accept a 1 3/8″ dowel (because that’s what we had in stock), while the other part has a slot of the same size. I glued, stapled and screwed the dowel block to the back of the 1/2″ plywood back. I set the slotted part so that it held the back 1/2″ off the deck so it wouldn’t scrape. By the time we got to performance night, I had cut another small piece of dowel to fit in the top of the slot, and held that in place with some metal strapping. Here’s how it worked. 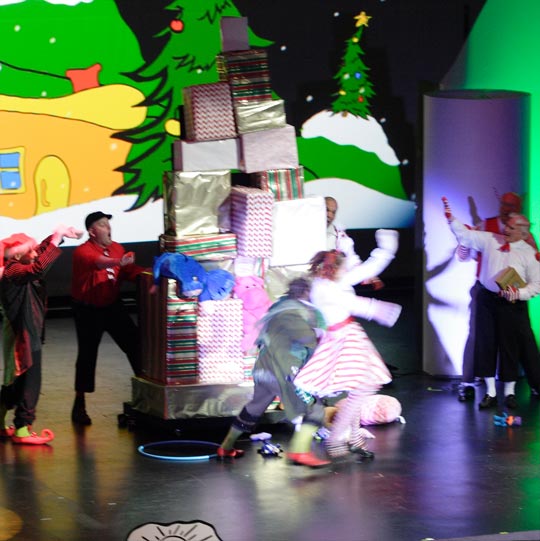 The tower is going to fall! Gunch saves LindyAs the narrator re-told the story, we had some sound effects of a great creaking and groaning to set up the impending collapse. As Gunch ran to save Lindy (the only one who gave him a second chance), we triggered a strobe effect with the Mac 2Ks we rented. 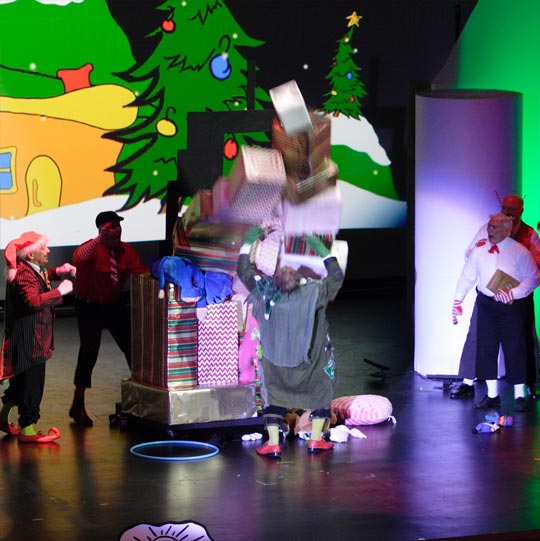 The mountain starts to fallThe strobes continue. On cue, the two guys behind the mountain start to push the back forward, which dumps the toys. Gunch starts his fall backward. 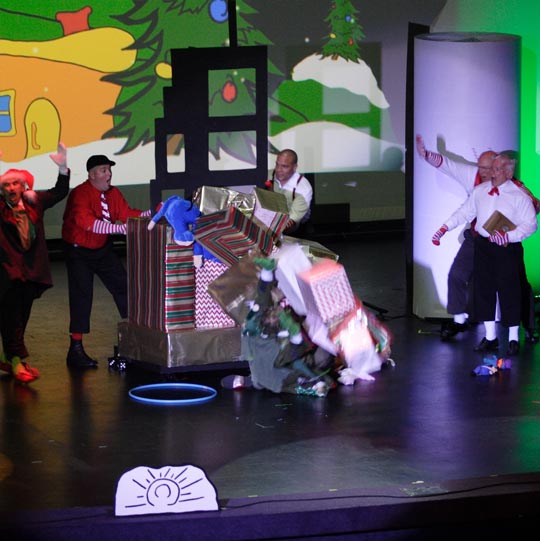 The fall continues.You can see some of the modifications to the back. I originally “Swiss cheesed” it to cut down on weight. We also cut the back to fit the shape of the packages. In the end, I didn’t need to cut it down, as it just rolled away, base and all. 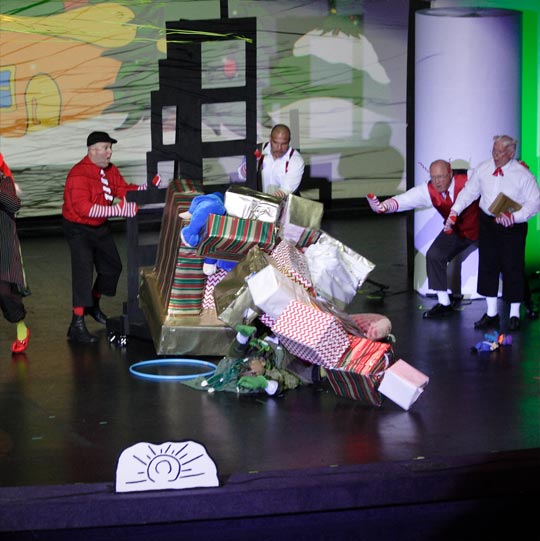 The finished fall.Well, almost. It looks like it still has a small ways to go to cover Gunch. As you can see, the packages all stick together, but look like they fall at random. The best part is, it all stacked right back up the same way every time. 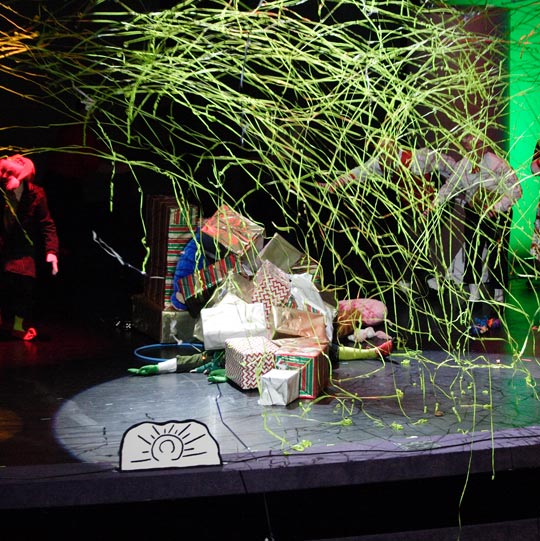 A little “mis-direction.”Finally, to complete the effect, we fired two aero-technics on either side of the stage, and played a giant crash sound effect from ProPresenter (it was a tree crashing on a house). The entire fall took less than a second (great work to whichever of our photo team shot this!). The cuing was very tight–and required that we had sound effects, the tip, aero and lighting all firing at just the right time. I cued sound fx and lighting visually with hand cues and cued the aero over wireless ClearCom.

The areo worked great and was fired with a handheld remote launcher that I designed and built with the help of one of our lighting volunteers (who also served as launch commander). But that’s another post. I guess you could say this effect worked because Sunday afternoon, as the tower fell and the aero flew, a child cried. I actually cut my blackout shorter than normal so she’d know everything was actually OK. I know, I’m a softie…