Today we wrap up our coverage of NAMM (which is good since it was a week and a half ago…), and we’re going to start with a product I didn’t actually see. The problem was lines. As in lines of people. Wrapped all around the booth, 2 or 3 deep. I just didn’t feel like fighting my way in there, though I kind of wish I had. I’m speaking of the Shure booth, and of the upcoming PSM900 wireless personal monitoring system. 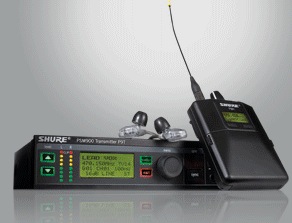 The new PSM900, coming in late March-ish…I’ll go on record as not being a big fan of either the PSM700 or PSM600. I think they’re both noisy, expensive and neither do stereo very well. The fact that the newest of those models was introduced in 1999 could be part of the problem. Shure essentially ceded the wireless IEM market to Sennheiser (who makes, in my opinion, a significantly better product). Into those waters jumps the PSM900. I learned about this product from my local Shure rep, who in addition to being a good guy, is a musician and tech guy at his own church. He tells me the 900 sounds just like a wired 600 system. How did Shure pull this off? According to the sales literature, it’s because they use Audio Reference Companding (just like in the very good sounding UHF-R series mics) and an Enhanced Digital Stereo Encoder.

The last part is what really got my attention. When we had Chris Phillips of Sennheiser on for our webinar on wireless mics, he explained that IEMs use FM encoding for their stereo. Basically, the stereo signal is modulated into a single channel, transmitted and de-modulated back into stereo. RF hits will mess with the decoding and the stereo sound suffers. That’s why you don’t get good stereo sound from most IEMs. Allegedly, Shure has solved this.

There are quite a few other features that make it look really attractive, especially in light of the issues I’m having right now trying to keep our worship pastor happy with his PSM600. I hope to get my hands on a demo in late March when it comes out, and I will tell you more. Update: I just heard from my Shure rep that the PSM900 will retail at $1650; street price should be around a grand, give or take. At that price point, it’s a much more attractive option.

I’m the naturally skeptical sort. I’ve also had several people tell me that triple-driver IEMs are a waste of money and marketing hype. On the other hand, I own a set of single-driver UM1s and love them. They sound quite good and are the most comfortable non-custom fit buds I’ve ever listened to. It was with that set of mixed feelings that I stopped by the Westone booth and tried out the new UM3x. To sum up, it’s a good thing I’m naturally a cheapskate, otherwise I would have plunked down the $379 right there and bought a set. They sounded that good. 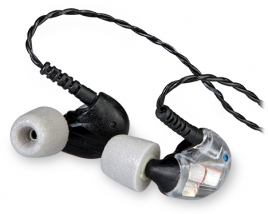 My birthday is in March if anyone needs any ideas…The UM3x retains all the essential comfort characteristics of the UM1; which is to say they are super-comfortable. They demoed them with the cheap yellow disposable foams (from Shure, ironically) so we weren’t sharing ear wax. Even with those, the fit was great. With a set of Comply foams, it would be amazing. The first word out of my mouth when I turned them up was, “Wow!” I heard excellent bass extension that was clear and tight, smooth midrange and crystal clear highs without a hint of harshness. They were eminently listenable. The low end had an almost magical quality that I perceived as “feeling” the bass; much like standing in front of a sub when your clothes are rattling. I know I wasn’t “feeling” anything, but that’s how they translated. I think bass players and drummers would really like these.

Since we live on a strict budget, I can’t go out and buy them. However, I am seeking freelance income opportunities in order to pay for a set. Perhaps I need sign that reads, “Will Consult for UM3xs.” Just a thought…

These are a few things that were just cool. I don’t know much about them because we didn’t talk to anyone or get any lit. And none of this is on their website yet. Still, this is interesting stuff. Sorry for the crappy iPhone pics; I didn’t think to bring my SLR and the light was poor. 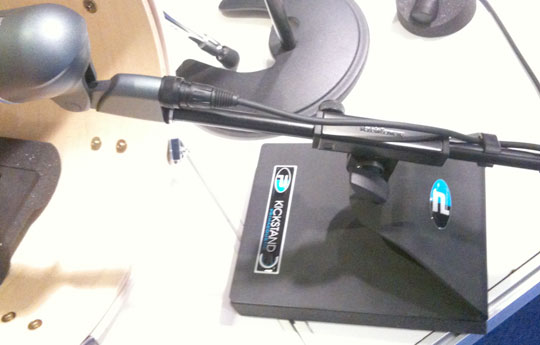 The Kickstand, based on Recoil StabilizerThis was a cool kick mic stand, obviously based on the popular and effective line of speaker stands known as Recoil Stabilizers. I’ve had some experience with those pads, and they are good at what they do (de-coupling the speakers from the surface they’re on and deadening up the box to tighten up transients). Presumably, this stand does the same thing. It remains to be seen how much tighter a kick mic might be, but I would give it a shot if I could… 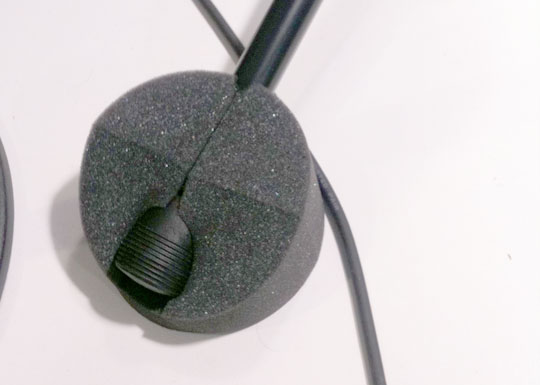 Eliminate floor noise from your tripod stands.This is a clever idea; decouple your mic stands from the floor. I would think these would be especially effective if you have your musicians up on elevated platforms (like we often do). These may well clean up a lot of foot stomping noise if you have an active percussionist or guitar player. 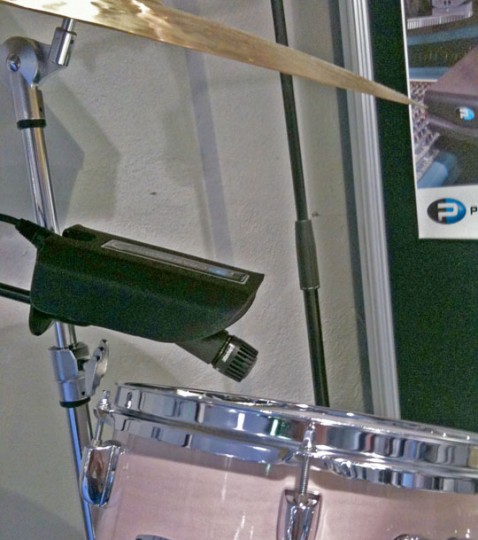 Cymbal bleed in your tom mics? Try this…This may solve one problem and cause another, but it’s an interesting idea. Now that we have the Heil PR-28s, I don’t think I would use these, but if you are using 57s or similar mics on toms, these may be worth at shot (depending on cost, which I have no idea about…). 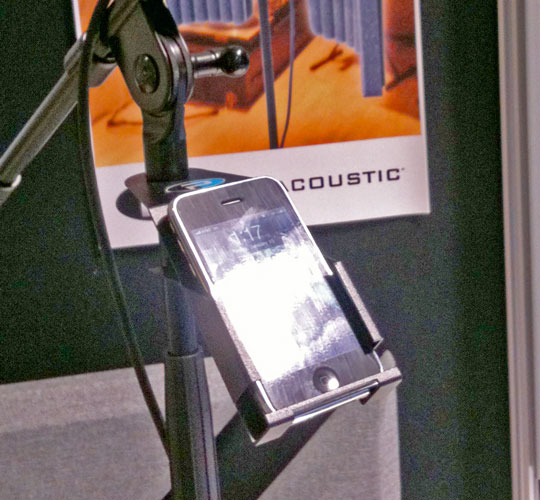 For the worship leader who has everything…Last but not least, here is a clever holder for your iPhone. Initially this looks like pure indulgence; however, imagine you’re at a small church and have to lead worship and run ProPresenter at the same time. With ProPresenter Remote and this holder, it might be a little easier. Or I suppose you could use it to Twitter during the songs. Your call.

So that’s it. No more NAMM coverage. At least not until I get some of these products in my hands; at which time it will become new product reviews.