What We Can Learn From The Opening Ceremony Fail

Last Friday night, with 66,000 people watching live and another few hundred million watching on TV, Canada presented us with a creative and well produced opening ceremonies. The environmental projection was quite stunning, and just as the producer hoped, the event felt much more intimate than many such events in the past. While it may have dragged a bit at a few points, overall, it was very enjoyable to watch. At least  until the critical moment toward which the entire night had been building. The moment that everyone wants to see; the moment that officially kicks off the games—the lighting of the Olympic torch. 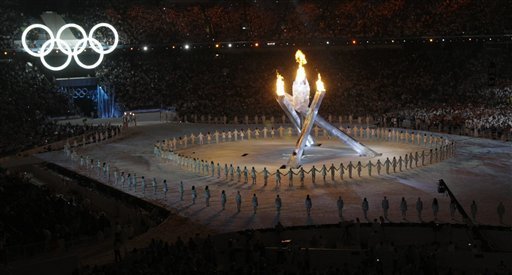 If you have been living in media isolation for the last 3 days, you may not have heard that the cauldron was to be a four-legged device that appeared to be carved from ice. Each leg rose from the floor and joined in the center with the main cauldron. Except only three of the legs rose from the floor; the other apparently a victim of a mechanical malfunction. Now, I’m not here to rag on the production team for the mishap. However, the way it was handled can be a source of learning for us.

I’m quite sure everyone involved in the production was expecting all four legs to rise from the floor. All four legs, however, didn’t. At that moment, someone had about 20 seconds to make a critical decision (perhaps even less). They chose to try to diagnose and solve the problem. For about 3-4 minutes. While Bob Costas rambled on an on about the failure.

I would suggest that a better course of action would have been for the producer to get on the com and tell everyone, “We’re going with 3 legs, light the torch!” Then send someone down to the basement to make sure the 4th leg wasn’t going to suddenly appear. Had they chose that route, no one would have been the wiser—at least in the moment. Sure, afterwards people would have put it together and figured it out. But in that magical moment, the torch would have been lit to thunderous applause.

The same can happen in church settings. When something major goes wrong, if it’s not immediately apparent to the audience, change plans and go on. Quickly. Remember, the audience doesn’t know what’s supposed to happen; if you skip an element because something didn’t work, no one is the wiser and the mood is not broken.

Granted, sometimes this doesn’t work—such as when something falls, an element starts then stops or the like. But on a failure to launch, it’s better to quickly skip it and move on. And if everyone involved in the production is not on com, it’s a good idea to prep people in advance to that effect; if something happens, we may move on—be prepared.

After a minute or two the look on Wayne Gretzgy’s face made it pretty apparent that something was wrong. However, Bob Costas going on and on about it for 3 minutes sealed the deal. Perhaps the worst thing someone on the platform can do during a failure like that is make a big deal of it. “Well, I guess we were going to watch a video, but it looks like the tech team is having some trouble. Why don’t you all turn around and stare at them while they try to figure it out.” Ever get that?

When I was in college, our department produced a massive multi-media extravaganza each year. We asked producers from all over the world to send us their best multi-image shows (shows produced with slide projectors, lots of them, as in 9-27). We presented them to the campus as a sampling of the best creative live media of the year. In my senior year, I was the tech director. I was responsible for figuring out how to present 12 different shows, of different configurations programmed on three different systems.

Rehearsal went well, we had a bunch of changeovers, including rerouting data tracks to different dissolve units. Everyone was on their game. When it came to the performance, we hit a snag. We switched from an AVL show to another show (the name escapes me now—I’ve banished it from my mind) and while the MC introduced the show, we tested the data link. My projection tech called up that we had no data. No data meant no show.

With one ear in the com and one on the MC, we troubleshot the problem. As I heard the MC wrapping up, I clicked over to his IFB, told him we were having an issue and he needed to stretch. Without missing a beat, he launched right into a story about how the next show was created. Once we identified and fixed the problem, I told him to move on. He wrapped up the story and we went right into the show. The audience never knew anything was wrong.

He completely had our back; instead of pointing out a problem, he covered it up gracefully. And no one was the wiser.

To me, this is the big lesson; even with years to plan, weeks to rehearse, the ability to hire the best technical talent and a $30-40 million budget, something still went wrong. I would argue that what we do in church each week is significantly harder. We get one week, sometimes 30-40 dollars, and we do it with volunteers. So yeah, stuff is going to go wrong.

And when it does, how we respond is infinitely more important than what happened. I know of churches whose post-service de-brief becomes a shouting match of blame-fixing. I know of techs whose jobs are threatened every time a lighting cue is missed. I know of volunteers who live in fear that any mistake, no matter how small and unnoticeable, will be publicly brought to light and harshly criticized. This is wrong.

If we can’t give ourselves and our people a break when something goes wrong, we should probably find another line of work. This is not to say we shouldn’t learn from mistakes; we should and try to prevent them in the future. But always remember to handle them with grace. Don’t discount 65 minutes that went perfectly because 1 minute didn’t. Really, you’re not that important. I say that to whoever thinks all this technical stuff should flow perfectly all the time.

What we do in the technical world is hard. It’s amazing it works at all. Don’t let one mistake distract from the dozens or hundreds of other things that went well.