In Search Of: The DAW

The last few months, I’ve spent some time on and off looking for a new DAW. I don’t need the power (or expense) of ProTools; and Logic, while great, is out of my budget. Really, I have fairly simple needs for my application. I want to be able to edit a few tracks quickly, apply simple effects like compression and EQ and bounce the finished mix out as an MP3. Now, there’s always Audacity, which is a great, free editor. However, it’s a terrible platform to edit on, and none of the effects happen in real-time so it’s very difficult to audition anything. So while that’s on my HD and I do use it from time to time, I needed a little more. 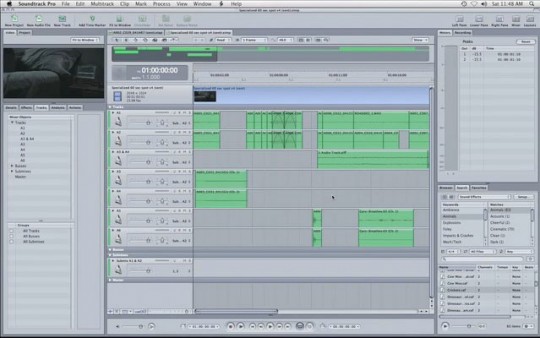 Ah, Soundtrack. If only Apple would sell it separately…
My starting point for this type of DAW is Apple’s Soundtrack–honestly, it’s one of my favorite audio editors. It’s very powerful, yet has a simple and accessible interface. And the Platinum compressor is one of the most transparent I’ve ever heard on dialog. The problem is that Apple doesn’t sell it separately. It’s only available as part of the FinalCut Studio suite or bundled with Logic. We don’t have extra licenses for either at work, and I really can’t justify the cost of either.

So that set me on a journey to find something like Soundtrack that doesn’t cost an arm and a leg. I found two so far (and I should also mention that I’m on the Mac platform, so Windows-only DAWs need not apply). 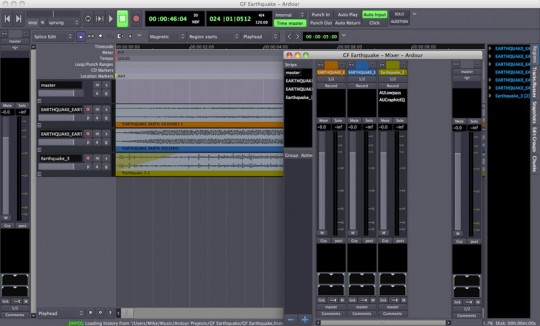 The Ardour interface is very complete and highly customizable.
Ardour

Ardour is an open-source, cross-platform DAW that’s actually quite impressive. The feature set is extensive and simple tasks like editing regions and tracks are just that–simple. It comes with a good collection of plug-ins that can be inserted on any tracks, just like a live-mixing console. Track automation is included as well. The interface looks good, if not a little under-developed. As you use it more, it becomes clearer that it’s an open-source project. The menu system is extensive, and a little less cohesive than commercially developed products. I’ve also had problems doing basic tasks like bouncing tracks out to a stereo file, with automation and FX intact. Also, Ardour is cross-platform. As such, they use a third-party audio routing utility called JACK to get audio in and out of the mixing engine. On the one hand, this gives you a lot of options for how to route your audio. On the other hand, it’s a bit of a pain to set up and configure every time you want to do some editing. It took me a while to get all the boxes checked and all the right selections made before I had it set up properly to record and play back. 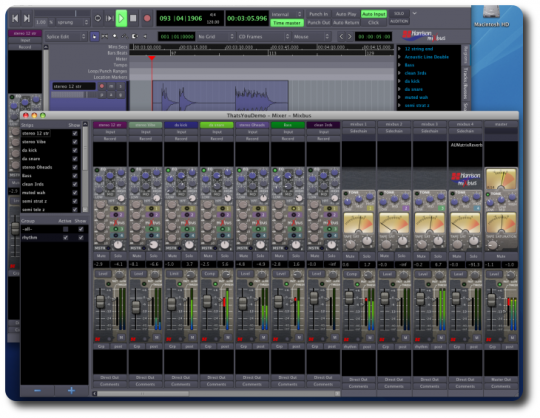 Ardour, with the Harrison MixBus Mixer on top.Ardour is essentially free, though they encourage you to donate $40 to help continue development. You can also buy Ardour as Harrison MixBuss. As MixBuss, Harrison has put their DSP processing on top of Ardour for the mixdown process. That interface is very nice and is developed around the one knob for one function model. Right now, MixBus is available for $79, which seemed like a great deal. I was almost ready to go that route until I found my next option. 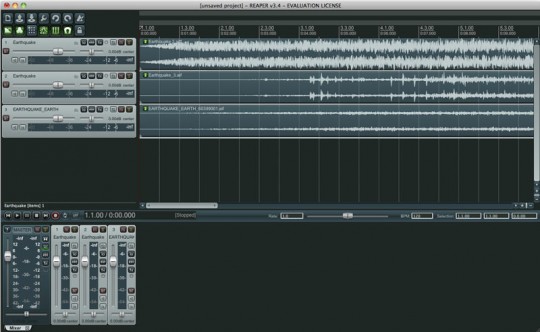 Right up front I want to make it clear that Reaper is not free. I’ve had two people tell me to check it out, use it and it’s great because it’s free. This is not correct. There is a 30-day evaluation period during which the entire program is fully functional. After that time, the licensing agreement clearly states that if you want to continue using it, you have to buy it. Their philosophy is simple; make a good product, let people try it, charge a fair price. Personally, I think this is the right model and we as end users should support by purchasing the product, if it’s a good one for us. A full commercial license is $225, a non-profit and personal use license is only $60; so if you use it, pay up.

With that out of the way, let me say I really like Reaper. The interface is clean; almost Apple-like. Reaper is a full 64-bit capable, cross-platform program. Unlike most DAWs, the application download is 4 MB for Windows, 7.8 MB for Mac; this means it’s not full of 50 Gigs of samples and sound effects you may never need or use. It will handle MIDI sounds as well as audio files, even on the same track. I like that the automation is rubber-band based, making it easy to set levels for your mix (you can playback, mix down then later tweak the points). It comes with a decent selection of plug-ins, and runs most major plug-in types. The program is fast, and requires minimal setup to get it working. I tested the included compressor plug-in on some dialog recording and it sounded almost as good as the Platinum comp in Soundtrack.

Based on my initial testing of the software, I will be sending them some cash and going forward with Reaper as my DAW. One other nice touch is that they give you two full version updates with each license. That means if you purchase 3.4 now, you get free upgrades all the way to 4.99. Know of any other software company that does that?

Now, clearly, I’ve just skimmed the surface of these two products. My intent was not to give you a complete review, but make you aware of them so you can check them out for yourself. In an age where it’s almost impossible to get demo versions of DAW software (I checked, non of the major commercially available packages have demos), these are two refreshing alternatives. Check them out.