When I talked with Bruce Meyers of DPA back in January at NAMM, he showed me a new hanging choir mic they were working on. I was interested immediately, though my application was not a choir. I have been on the lookout for a couple good audience mics for our IEM system, as well as a mic for our baptistry. When I saw the 4098HB, I thought this could be perfect.

It’s ironic then that my first real test for the 4098 was a kids choir. Bruce contacted me last week and said the mics were in and I could have a few to play with. I asked Jed very nicely if I could possibly have them for this past weekend as we had a kids choir on deck. 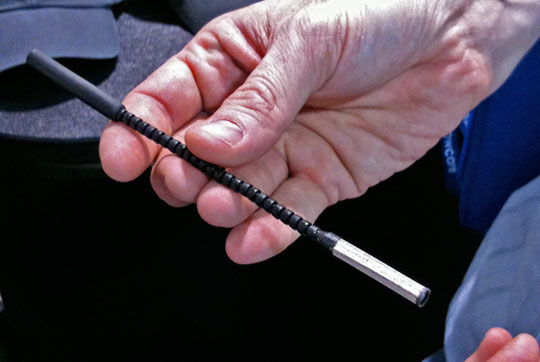 The silver end is basically a small, end-address shotgun mic.Now, when it comes to mic’ing challenges, a kids choir is near the top. I’ve done quite a few over the years and have never been happy with the results. I’ve tried AT’s choir mics, various large and small diaphragm condensers and never achieved good gain before feedback with any kind of decent tonality. Normally, even large kids choirs are quiet, and everyone wants them to be on the front steps, right out in front of the main PA. So let’s take a large, quiet source, point some mics at it from a distance of a few feet and set it out in front of the speakers. What could possibly go wrong.

And that’s what we did this weekend. In this case, the choir was 23 second- and third-graders. We lined them up at the lip of the stage in two lines about 16 feet long. The mics were placed close to the 1/3 points in front of the kids, about 3 feet from the first row, just over the heads of the lower row. 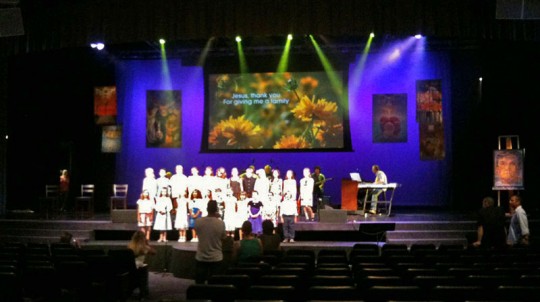 If you look closely, you can just see the mic stand near the corner of the 1/2 round. Sorry for the crappy iPhone photo. (click to enlarge) I figured I would need to ring them out so I patched an 8-band parametric into each channel and cranked up the gain. Actually, I got surprisingly good results before I did that, and I ended up using just 4 narrow notches, each about 6 dB down. I did a little tone adjustment with a wide-Q dip centered at 2.5K to just take the edge off. The results were stunning.

I can honestly say this is the first time I’ve ever had a choir, let alone a kids choir, keep up with the band. Our band consisted of piano (playing Ivory through the new Receptor), keys, B3, bass, electric, acoustic and drums with brushes. The kids came through loud and clear with decent tone. It was a touch on the harsh side, but this is a group of elementary school girls (with a few boys) so that’s to be expected (I’m commenting on vocal quality, so no hate mail…). 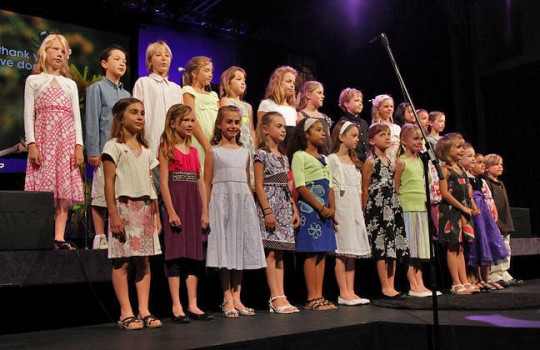 Here’s a better one. I love how small the mics are, almost disappearing. (click to enlarge)The mics are almost impossibly small with a very unique bending system. They remind me of the kind of articulating blower jets you might find on tools like scroll saw to keep the cutline clear. You can bend them just about any way you want, and they stay put. They utilize a small, threaded connector and an inline power supply that is essentially a large XLR shell. The cables are Kevlar wrapped for strength and lay out flat and straight. For hanging installations, you’d hang them, let them sit overnight to settle, then bend the mic into position, no goofy wire clips, springs or cages. For this weekend, I gaff taped them to boom stands.

The mic element is basically a diminutive shotgun, and is covered with a small windscreen. You can lose the cable and plug the mic straight into the XLR power supply, which we did for our IEM ambient mics. Our worship leader reported an improvement in sound quality with those as well, though they are not optimally placed at all. I expect if we can hang them over the house, pointed away from the PA, he will be very happy with the results.

I grabbed a section of the board mix of the kid’s song so you can hear for yourself. The recording doesn’t really do it justice; it was better in the house. However, a half-dozen people came up to me afterward and asked if we had tracked the kid’s vocals, so that gives you an idea of how good it was.

In the kit of mics I received, DPA also sent me the 4099G guitar mic and the new SMK 4081 stereo mic kit. I hope to throw the latter in the piano next weekend (which will let me compare them with the Beta 91s we have in there now and with the Receptor). I’ve already recorded some tracks with the 4099G; wait until you hear them.

For now, here’s a sample of the kids choir, featuring a song written by our own Gina Stockton.

Listen to the track.