This post was originally published last week over at the Church Production Magazine blog. After some traffic analysis, I decided to post it here as well in case you missed it.

If you’ve been around the church for any length of time, you have no doubt heard about Love Languages. Dr. Gary Chapman wrote a book about these five ways we express love for each other back in the ‘80s I think. In case you are unfamiliar, the love languages are; Words of Affirmation, Quality Time, Receiving Gifts, Acts of Service and Physical Touch. The idea is that we all have a primary love language by which we most effectively receive love. For example, a husband may receive love when he is given a gift; his wife may receive love through spending quality time with her husband.

The love language concept is very useful for people who are married or in a serious dating relationship. It’s also helpful to know how others around feel loved. Say you need to butter up a co-worker whose love language is acts of service. Do something for her that she normally does and she will feel love. As we all know however, techies are a different breed. We are not wired the same as regular humans, which causes most non-techies on a church staff to stay away, not really knowing how to relate to us. Being different, we have our own set of love languages. If you interact with techies on a regular basis, it would behoove you to learn these languages and figure out which one your techie responds to most favorably. With apologies to Dr. Chapman, here we go.

This doesn’t look different, but the implications are far greater. Most techies only hear words of dis-affirmation; “The mic’s not working,” “The camera is out of focus,” “It’s too loud,” “The light is in my eyes,” “It’s too soft…” the list goes on. The quickest way to a techie’s heart is to tell them they’ve done something well. This is good advice for anyone, but it’s important to know that techies are used to dealing with a barrage of complaints on a regular basis. Thus, any time anyone has anything to say to them, they are typically on the defensive from the start. In fact, I know some techs who never hear anything from leadership except criticism. I suggest saying a few positive things here and there; it makes it a lot easier to hear criticism when it’s appropriate.

This looks similar to Quality time, but it’s quite different. Most techies I know are First In, Last Out (or as we say in the trade—FILO). At our church, my tech team arrives at noon on Saturday, and doesn’t leave until everyone else is gone. On Sunday morning we’re the first in again at 7:30, and are still coiling cables long after everyone else has a table at Chilli’s. We show up early because we want to make sure everything is set up and ready to go when the band arrives making sound check and rehearsal as quick and productive as possible. Want to exasperate a techie who’s already been there since 7:30? Show up late, then take your time getting your station set up, then act impatient during the soundcheck process. It’s no fun to sit around for 30 minutes with nothing to do while waiting for the band to show up, especially if we’re blamed for sound check running long (and we usually are). Be in place and ready to go when you’re supposed to be and your techie will feel very loved.

Similar to receiving gifts, we like it when gear manufacturers show up with good swag, plain and simple. In the last few years, with the economy suffering, the quality of swag has gone downhill. This does not show love. If we’re going to spend a whole day on a show floor, walking around looking at gear and eating sub-standard convention center food, we want to at least take home some decent stuff. EV gave me a sweet little Leatherman mini multi-tool over Christmas. I felt loved. Yamaha gave me a really nice fleece coat. I felt loved. A pen with your company logo on it? Not so much. Unless it’s a Pilot G-2 .5 mm black. Then maybe. But I can get those at Staples. And it’s easy. So probably not.

Acts of Load-In and Load-Out

We techies do a lot of work. We move Steeldeck, road cases, cables, lights, speakers, mics, drum kits, guitar amps and so on. The guys and gals who work in a portable church setting are deserving of special recognition. The Bible tells us that many hands make for light work, and the same is true for what we do. If you see two guys pushing a bunch of cases in, ask if you can help. Please ask, because sometimes we have a system and your help doesn’t, well, help. Most times though, and extra set of hands of two can really make our lives easier. It’s also important to note that techies are not technically janitors, though that’s not apparent in our day to day lives. Almost every week we pick up bottles of water (most of them opened with .25 ounces missing–the classic one-swig per bottle), sandwich wrappers, broken drum sticks and various other detritus left behind by the musicians. If you want to share some love with your tech team, pick up your own trash. 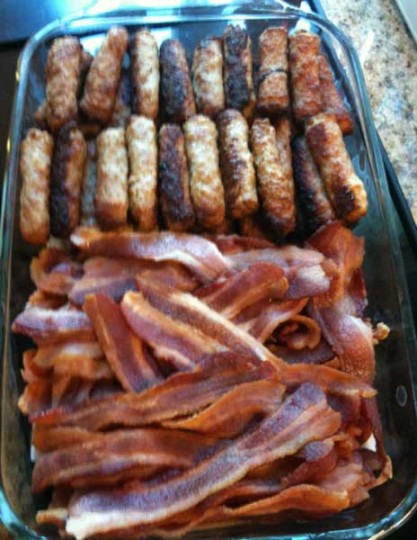 That’s love in a dish right there.Specifically, bacon. Forget touch, we like to eat. As I said, we work really hard, and we do so for long hours. Having a steady stream of food makes the tech booth a happy place to be. I know of one non-techie church leader who used to regularly bring the tech team treats, lunch, donuts, coffee, whatever (Jan, you’re a hero to all techies everywhere!). Do you think her tech team was happy and would do just about anything? You bet! Here at Coast, we have a great group of volunteers who bring breakfast every Sunday morning. A big steaming plate of bacon sure takes the edge of a 7:30 AM call time. We also have people bring in lunch and dinner during really big production seasons like Christmas and Easter. I can work 12 hours a day a lot easier when lunch and dinner show up at regular intervals.

So there you go. A few quick thoughts on how to show love to your local tech crew. A well-loved and appreciated tech crew will move mountains for you; learning their love languages is an investment worth making.