The Other New System

Sometimes I wish I was an audio director and not a technical director. Audio is what I get excites me, and what I stay awake at night thinking about. However, at this stage in my life, God has me doing what He’s gifted me to do; build good technical systems, processes and the teams to run them. So while I get to do audio, I also work on video, presentation and lighting systems. And lighting is what we’re talking about today.

Our existing lighting system is pretty bad. When it was installed, money was tight and the church did what churches do; put in the wrong stuff, installed wrong. We have 72 channels of dimming installed, roughly 45 of which work. And some of the “working” channels won’t hold a full load, so we’ll have lights shut off at random intervals. When the electricians came out to survey the system, they spent about 2 hours going through it, only to come back saying, “Uh, yeah. There’s nothing here we can save. It would be best to re-do everything.” So that’s what we’re going to do. 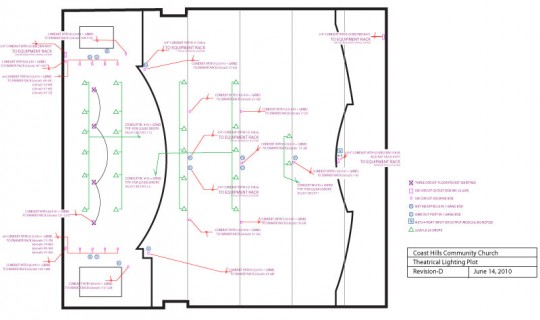 The system was over a year in the making. Plans stared in early 2009, were put on hold pending the hiring of the new TD (who turned out to be me), and I went over them and ran through about 4 variations on the plan before settling on the final design. Our budget is still tight, so we had to make the most of every dollar. As much as I would like to upgrade our fixtures, switch over to new LED lights, add some movers and generally blow it out, what we can do is re-build our infrastructure.

We’ll be putting in two ETC Sensor racks, a 96 channel and a 48 channel. We’re actually wiring for about 124 circuits and buying 80 channels of dimmers. We’ll use the racks as patch bays of sorts; putting dimmers in the channels we’ll use most often, and swapping them around as needed. Part of the issue for this is power (as well as cost); we don’t technically have enough to feed both racks, fully loaded. This sounds like a flaw in the logic, but follow my thinking.

Right now, we’re getting by with about 40 channels of dimming (including 12 for house lights). We’ll be more than doubling our dimmer count, and putting dimmed outlets all over the place making it easy to put lights where we need them. Over the next few years, I expect to be buying LED fixtures, which will just need low-amperage power, and not dimming. My plan is to slowly convert many of our 80 dimming channels to non-dim, switched power outlets that will supply juice for the LEDs. We’re wiring the house lights to so we can easily convert the 12 incandescent circuits to 2-4 LED circuits very easily.

What we’re not skimping on is networking. Right now, we have 2 DMX universes, and they all drop down to a single distro location. In the new system, we’ll have 15 outlets, a mix of Net3 and DMX. We’ll have Net3 to DMX touring adapters so we can put DMX wherever we want. As LEDs take over, we can handle 64 DMX universes over the system (that should do…).

We’re also putting in twenty-four 208V relayed drops for moving lights. Right now, we have to use circuit breakers to turn the movers on and off when we rent them, which is a drag. Soon, it will be a cue on the Hog.

We’re putting in two 10-button panels on the floor, one at the back and one on stage to call up frequently used scenes without firing up the lighting console. And we’ll have a LCD touchscreen at lighting world which will do the same, and more. That will enable us to get rid of our old static lighting console that we use just for turning the lights.

That’s a quick look at the new system. It’s a lot of invisible stuff that no one will ever see, but it adds a bunch of functionality as well as reliability (not to mention safety) to our room. And it gives us something to build on, which is always a welcome change!