UPDATE 7/10/2010: It was pointed out on Twitter that there were some channel polarity issues with the audio samples. Though I’m still trying to figure out exactly what happened (and I will test and figure it out on Monday), it does in fact seem that the polarity of the original audio samples posted here were not correct. After verifying each of the samples with a Goniometer (a meter that measures stereo phase and sound field), I have re-rendered the files. The end result is that each of the IEMs fare better than previously (and the Senn 2000 and PSM are nearly identical to the original sample); and my original findings still stand. The quality of all was raised equally, and I stand by my original conclusions. I have replaced all the samples so you can hear them in the best light possible. Thanks to those who pointed this out. BTW, the reason I didn’t really notice it is that I was always listening through earbuds (Westone UM1s to be exact) and that mode of listening minimizes phase errors. There is a difference, but it’s slight. Anyway, back to the article as written. END UPDATE 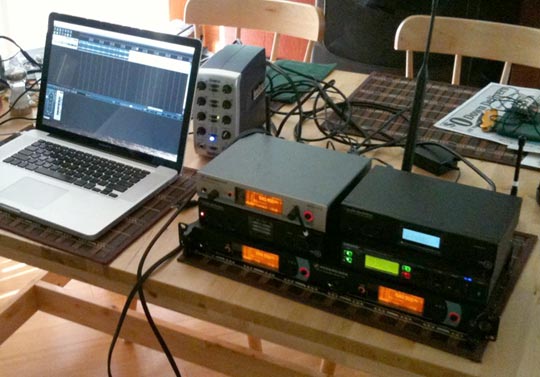 It’s the moment you’ve all been waiting for; The results show. In Part 1, we compared the features of the Sennheiser G3 along with the Audio Technica M2 and M3. In Part 2, we looked at the Sennheiser 2000 series and the Shure PSM900. Today, we’ll listen to how they all sound.

Before we get to far into this, I want to say from the outset that this is an imperfect test. I used pre-recorded music (albeit some pretty great music, I Got the News from Steely Dan’s monumental album Aja…and if you don’t own it, go buy it now. We’ll wait.), and captured the output of the receivers through my Lexicon Omega audio interface. I went straight from the 1/8″ jack to dual 1/4″ inputs, without compensating for the impedance change. I know…I’m such a slacker. Still, there are some pretty clear differences. And when I compared the recordings to the receivers, the recordings are accurate enough to make a judgement. As I said, it’s not perfect, but it gives you an idea of the sound quality of each unit without actually having to arrange to demo all five of them. Note that there is no EQ or other processing done on any of the tracks. All I did in Reaper was line up the tracks and adjust the volume so each track was with in a few tenths of a dB. With that said…

The thing that surprised me is how good they all sound. In fact, if the others weren’t around, you could pick any of them and you’d probably be fine. It’s only when you really get into comparing them next to each other that the differences start to emerge. I have a hard time picking a clear winner, though it’s a little easier to pick a loser (and even then, this one is not a terrible choice). The Sennheiser G3 just didn’t quite hold up as well against the others. Aside from the ever present noise (which wasn’t as bad as the 2000 series, remember), the high end wasn’t quite as crisp, and the overall sound field felt a bit more collapsed. The ATs (M2 & M3) sounded surprisingly good, especially in the mid- to upper-range. They did lack a bit in bass response, though the stereo field was quite good. The Sennheiser 2000 sounded excellent overall, and it’s not until you compare to the PSM900 that you notice the highs aren’t quite as crisp. All the differences are subtle, though I think you’ll hear it in these two samples.

Sample 1 is a stair step of each system. I lined up the tracks in Reaper, then ran each system for approximately 10 seconds. You should be able to hear the change at each 9 or 10 second mark. Here’s the order for this one:

For the next track, I mixed the order up a little. This time, I wanted to pit systems that would likely be compared against each other. They are grouped roughly the way I see them competing. So it’s 2000 vs. PSM900 and M3 vs. G3 with the M2 thrown in at the end (because in all honesty, it sounds 99% as good as the M3). To make the contrast more noticeable, I threw the original track in the middle. So here’s what we have:

It’s pretty clear when you jump to the original track that each of the IEMs is really only giving us about 80% of the full audio spectrum. However, they are all pretty useable. And I think in a live setting, just about any of them would be sufficient.

So how do we determine a winner? Well, I think it comes down to what you value. If cost is the supreme determinant, than the M2 is certainly a solid pick. It’s the least expensive by a few hundred dollars, and sounds quite good. The trade off is a huge, plastic pack with a bad battery compartment design and very limited frequency selection plus a fixed antenna. On the other end of the spectrum, if you demand road-ready rack-mountable gear with full networking capability, remote antennas, and a ton of extra features, the Sennheiser 2000 is your only pick. The trade off there is cost. It’s the most expensive by a lot. And there’s that hiss…

In the middle, it gets tougher. For me it’s hard to chose the M3 over the G3 or PSM900, mainly because of the beltpack. They sound great, but trying to dig those batteries out each week would drive me mad, and I’m not sure how well the pack would hold up. Plus, my worship leader would not appreciate the size. So if the M3 is out, that leaves the G3 and the PSM900. For me this choice is easy; the 900 wins. The overall sound quality is better, the range is superior out of the box and the noise floor is almost non-existent. The G3 does offer networking, but that feature alone isn’t enough to sway me.

So I guess that wraps it up. At the end of the day, I’m putting my money (OK, my churches money) where my mouth is. I just ordered a PSM900. Here are the complete tracks of each system if you want to hear longer samples.