I tend to be a little non-conventional. A few years ago when everyone wanted a Yamaha M7, I wanted an RSS M-400. Now it seems every church is going with an Avid Venue; I went with a DIGiCo. And while Avioms still seem to reign supreme in the personal mix space, I’m going with the RSS M-48s. Unconventional maybe, but I prefer to think of it as trend-setting. A few people have asked me why I’m going with the M-48s over the Aviom, and as I did with my “Why DIGiCo over Avid” post a few months back, I’ll lay out those reasons for you. 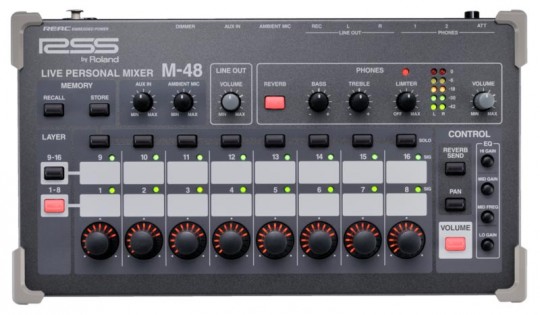 Honestly, I think grey was a good color choice.Greater Flexibility

Avioms have a lot of things going for them, especially if your band is fairly small. However, once your input count rises above about 20 or so, it’s harder and harder to figure out how to cram all those channels down to the 16 channels offered by Aviom, especially when everyone gets the same 16 channels. It’s even harder if you have a few stereo sources. Sure, you can submix and create stems, but it eats up a lot of mix busses on your console, adds extra work for the engineer and still means everyone has to be happy with the same set of stems.

With the M-48 system, each personal mixer is essentially a 40 channel mixer, and each mixer can be configured individually. Thus, if the drummer wants more discreet control of the drum mics he can have it, while everyone else gets a stereo group mix of the drums. You might give vocalists kick, snare and hat, while the keys player might get the whole kit in his stereo group. The simple fact that you can give each musician 40 channels to chose from, laid out in any configuration of 16 stereo groups they want is enough to tip the scales in favor of the M-48. But it gets better.

At first glance, it appears the M-48 is a 16 channel mixer, just like the Aviom. However, just as the SD-8’s channels can be mono or stereo, each of the 16 channels–they’re really groups–are stereo. That means if you want to send a stereo source to a stereo group, it A) stays stereo and B) only takes up 1 channel. And if you send multiple channels into a group, say 8 mics of a drum kit, you can pan them in the software to create a real stereo group of the drum kit. All the musician has to do is turn it up or down; however, the mix is in stereo. This is all done in software on the set up end, and can easily be recalled. 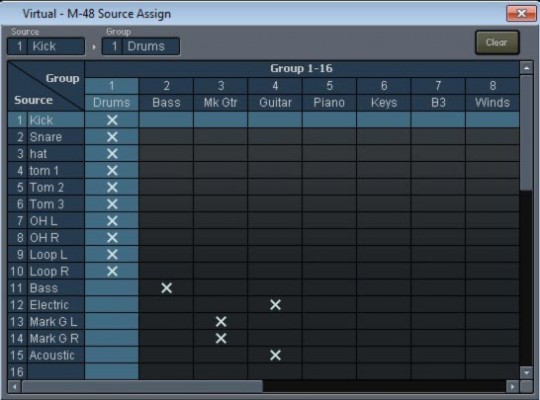 Assigning input channels to groups is as simple as ticking off Xs.Better Software

Perhaps that should be titled, Software, as the Aviom doesn’t have any. The RSS software enables you to go into each mixer, set up the groups, adjust the level and pan of the channels in the groups and save and recall presets. It’s all easy to use and actually looks like the mixer. 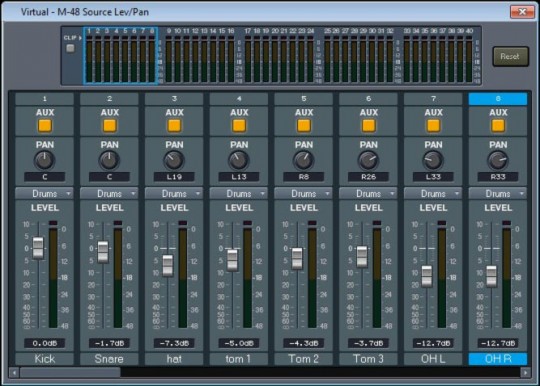 Avioms have never really been known for their great sound. Convenience, usability, and good at reducing stage volume? Yes. But sound? Not so much. In fact, when I was considering a move to Avioms (because the S-MADI Bridge hadn’t been announced yet), every musician I talked with about it was not thrilled because they’ve all had bad Aviom experiences. Now, I’ll admit that a lot of people (churches especially) don’t set them up correctly, over drive them and they sound terrible. I would avoid that problem. Still Avioms don’t sound great under the best of circumstances. The M-48s however, sound fantastic. Rich, warm and full, they’ll be a perfect compliment to the SD-8.

Aviom gives you the ability to adjust level and pan for each channel, mute and solo, adjust bass and treble overall and save presets. That’s about it. The M-48 does all that plus adds a 3-band mid-swept EQ for each channel (plus overall bass & treble), adjustable reverb for each channel, an ambient mic (with volume control), an external 1/8” input jack with volume control, 1/4” and 1/8” headphone outs plus stereo balanced line outs, the ability to record your mix via a 1/8” jack and adjustable threshold limiting.

So that’s my rationale. Once I get the system set up next week, I’ll be able to do some video blogs showing you how this all works in real life. Until then, if you’re considering Aviom, take a good, hard look at the M-48.