The impetus for this post came from a simple question; is it better to hit the pre-amps hard then turn down at the main output, or run the mains up around unity and dial back input gain to get the SPL you want out of the system. As a general rule (there is an exception, which I’ll detail in a minute), I would argue the former is the correct (or at least better) method, and here’s why. Most pre-amps sound best when you hit them pretty hard (at least up to the point of clipping, which is too hard). By running your pre-amps hard—and by hard I mean around -6 dB full-scale on a digital board, or within 6 dB of clipping on an analog board—you are maximizing your signal to noise ratio. And for some reason, they just sound better. Keep in mind, that’s a general rule, your mileage may vary. Now, it’s quite possible that if you dial your input gains up so that all your pre-amps are running high, your overall system level will be too high. That’s when you would lower your main level to compensate. This method will keep the signal to noise ratio high throughout the mixing chain, and will attenuate the signal at the last possible moment.

Before we get to setting up the gain structure, let me lay out my goals in for the process. First, I want to maximize S/N ratio, and use up as many of the bits in the analog to digital (A/D) conversion process that I can. Keeping the input level high meets both goals. Second, I like to mix with my faders around unity. Mixing with faders at unity is another key ingredient to good mixing. The fader resolution is highest right around unity, so you can easily make small adjustments. If you try to mix with your faders at -20, a slight change in fader position might yield a 3-5 dB change rather than the 1-2 you actually desire. Finally, I want to be sending a very solid signal out of my mixer to the processors for the same reasons (only in reverse) as the first point. That’s why proper system gain structure is important.

Here’s how I would approach the process. 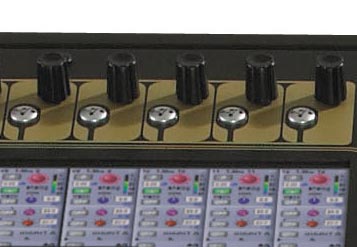 Gain setting in the digital world

For each input channel, I would have the musician play their at their loudest level. I then dial up the input gain until I’m within about 8-12 dB of full scale (minus 8-12 dB on the meters). I like to leave a little room for the musician to play louder when the lights go up (they always do). Many digital boards also have a trim (or attenuation) control in addition to the input gain. I use my trim to dial the level back to where it should be in the mix with my faders at unity. Because I’ve gained my entire system properly, my main fader is sitting at unity as well, and all is right with the world. As I am using VCAs to manage groups of faders (drums, guitars, keys, bgvs, etc.) and those live at unity as well, at least to start. All of this ensures that my signal to noise ratio is optimized at the A/D stage (just after the mic pre), and my starting point for my mix is faders at unity.

Now, if you don’t have a digital trim control on your board, you have a decision to make. You won’t likely be able to run the mic pre’s hard without having too much signal at some point, so you’ll need to dial the level back somewhere. Of course, you can always turn the fader down, but then you lose fader resolution. A better alternative would be to use a VCA to keep your fader at unity, though that can get tricky. Take a drum kit for example: If you optimize the gain on the kick, snare and hat, chances are, the hat will be way too loud in the mix. But more than likely, you’re using a single VCA for the entire drum kit. So now what? Well, you could break the drums up into zones and use one VCA for each; kick & snare, toms, hat & overheads might work. That way you can pull back the faders at the VCA level (a VCA is really an electronic remote control of the faders), and maintain fader resolution. You could do a similar trick with groups if you have them.

If you’re running short of VCAs, I would break my rule and set the input gain up so that the fader remains around unity for a proper mix. Audio is a lot about compromise, and in this case I’ll give up absolute input S/N to run my faders at unity. I have found that to be the wiser trade. 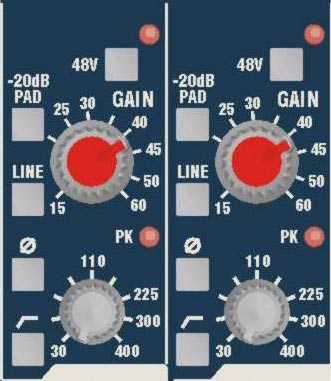 Gain setting in an analog world

Really, the process is much the same, though you are much less likely to have a trim control after the gain control. In that case, the same rules apply as a digital board without a trim knob. You still want to have good input level coming into the channel (for the most part), then turn it down as needed later in the mixing stage. You also want to keep your faders running around unity. Make the trades where you have to.

In either the digital or analog world, what you don’t want to do is under-drive your mic pre’s and have to add a lot of gain down the road. Sure you can push a fader up for a guitar solo, but you don’t want to regularly run your input faders at +8, your groups at +10 and your main at +5 because your input gain is set too low.

The exception to the rule

Now, all of this assumes you’re running on a professional grade mixer that has a mix structure designed with proper headroom. If you find yourself mixing on a Mackie or Behringer (or similar music store brand), chances are you’ll run out of headroom in your mix bus very quickly. If you set input gains on a Mackie the way you should, when all those hot signals hit the mix bux, it’s not going to be pretty. The busses quickly saturate and you lose all sense of dynamics. In that case, you need to really keep an eye on your overall output level and run input gains down accordingly. This isn’t a dig on cheap mixers—you can only expect so much for what you pay for them—it’s just reality.

That’s a quick guide to setting up your gain for an input channel. As I mentioned earlier, if you go through this whole process only to find that your overall SPL in the house system is either way too loud or way too soft, you have some work to do at the system processor or amp level. But that’s another post…