I’ve been posting on Twitter the last few weekends about my use of parallel compression and that’s generated quite a few inquiries asking to explain it. Having messed around with the process for the last 6-8 months, and really getting into it since we got the SD8, I’m seeing some real advantages to it. This turned out to be a really long post so I’m breaking it up into two parts. First, let me give you a little history and explain some terms. Later this week, I’ll show you what I’m doing. I’ll be the first to say I’m not yet an expert on this subject, but it’s been a lot of fun learning the technique and playing with variations of it.

A Brief History of Comps

There is some debate over where this technique originated. It’s often known as “New York Compression” as it was used heavily in the NY mixing scene during the ’70s and ’80s. Others say the ttechnique is over 40 years old, having been employed in Motown to help vocals stand out over the much more complex musical background of that style of music. If you listen to earlier samples of music (think Frank Sinatra), you’ll hear the vocals way out in front and a sparse musical landscape way in the back. When the much busier style of Motown music came along, it was hard to get the vocals to sit out front; they were getting lost in the mix. Parallel compression was employed to fix that. That’s basically how I use it today. You can read more about the Motown history of parallel compression in this great article (props to Jeremy Carter for digging this article up). Either way, it’s a greatly useful technique for enhancing your mix.

We throw around a bunch of terms when we’re talking about parallel compression—double patching, double bussing, smashing, spanking, bus with a comp—so let me see if I can clear some of those up. 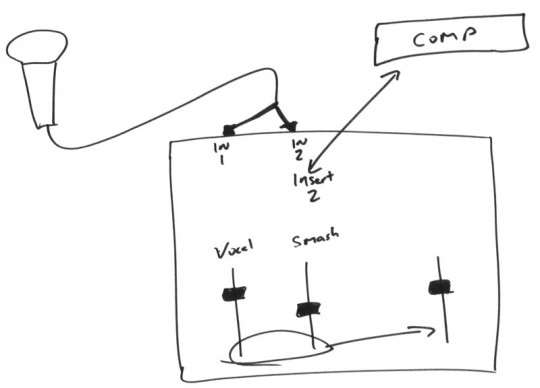 This is a greatly simplified version of double patching.Double Patching is how we achieve parallel compression. Basically, we patch the same mic into two channels and process them differently. On an analog board, this can be done with a simple Y-cable. On a digital board, you just patch the same input into two channels. In either case, one channel gets a heavier comp, the other is processed normally. 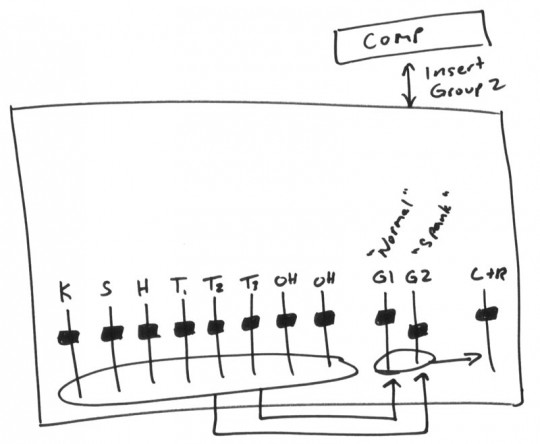 Again, a greatly simplified version of double bussing.Double Bussing is used if you’re working with multiple inputs that you want to parallel compress, you bus them the two separate groups; again, one is normal, one gets the comp treatment. I’ll talk about why you might want to do either method in a moment.

Spanking I consider spanked a milder form of smashing. On some level, I’m making up definitions of terms here, and others may define them differently. But for our purposes, spanking is like a smash, only with less gain reduction, perhaps 6-9 dB.

Bus with a Comp I learned of this variation from my friend Dave Stagl. In this variant, a group of channels is sent to one bus with little or no processing, and another one with a comp inserted. This is perhaps the most mild form of parallel compression, as when Dave says “a bus with a comp” he’s only doing 4-6 dB of gain reduction (maybe less). It’s a pretty subtle effect at that point. Thus, it’s not really a smash, it’s a bus with a comp.

All clear now? OK, let’s move on to one variation of the technique.

If you only have one channel that you want to enhance with this technique, and you have an extra channel to use, this is a great way to get it done. As mentioned earlier, you simply double patch your mic (let’s say the worship leader’s vocal) into two channels, say 25 & 26. Channel 25 is your “normal” channel. You may have a comp on it, and you may be doing some mild compression there. You also probably have EQ and other stuff going on; it’s what you normally use. On Channel 26, you insert a compressor and dial it down so you’re achieving a pretty significant level of gain reduction. How much will depend on the effect you are going for. I’ve played with settings ranging from 4-6 dB of reduction to 12-15 dB. I’ve been using less lately, and been happier with the results.

Next time, I’ll talk about Output Parallel Compression and show you some examples of how I’m using it in our setting.