How’d They Do That? Opening Number

The opening song for Gunch was a big one. It was an all original tune called The Joy of Christmas Time. The vision for the song was that it was sung by the townsfolk as they prepared for Christmas in the town square. The idea was that nearly every line would be sung by a different person or group of people. 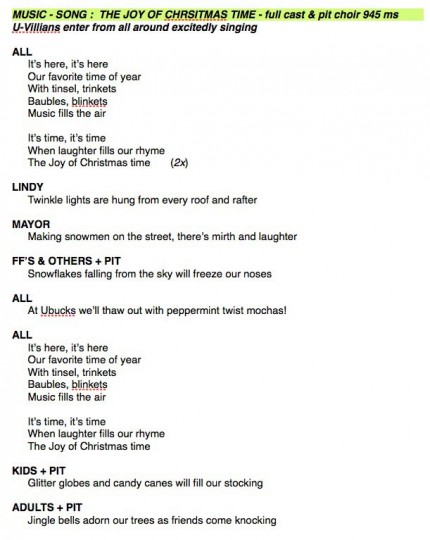 This is the first page of the song lyrics; it moves pretty fast.
This entailed managing mics on 12 actors, the two DPA 4098 stage mics plus the 8 person pit choir. At first I tried leaving all the mics open for the whole song, but that led to a lot of stage noise and were on the edge of feedback. The first time we ran the number, I tried running it manually, moving the faders up and down with the song, but the lines come too fast, the faders were too far apart and I simply couldn’t keep up with watching the script and getting to the next fader (or in the case of groups, 3-5 faders) in time. The solution was simple: Snapshots.

Now, I’m already on record as being a snapshot addict. I love using them to set up the baseline mix for each song, then I can mix it up as much as I want without fear that I’ll forget to re-set for the next song. For a song like Joy of Christmas Time, I really needed them to turn on and off the vocal mics. What I didn’t want, however, is the band mix changing for each snapshot. I wanted to fire one snapshot to set up the band mix, then fire a bunch of others to run the vocals. And if I needed to change the band in the middle I needed to be able to do that without fear of the next vocal snapshot resetting it.

Enter the Scope. Scope simply tells the console what parameters to recall, for what channels for each snapshot. Most digital consoles have some form of this; DIGiCo and Avid use Scope, Yamaha uses Selective Recall, Allen and Heath and Soundcraft use…well, actually I don’t know. But I’m guessing they have something.

In my case, I told the console to recall the fader positions for the entire band on the first snapshot, then for the subsequent ones, only recall the vocal mics. Note the following screenshots… 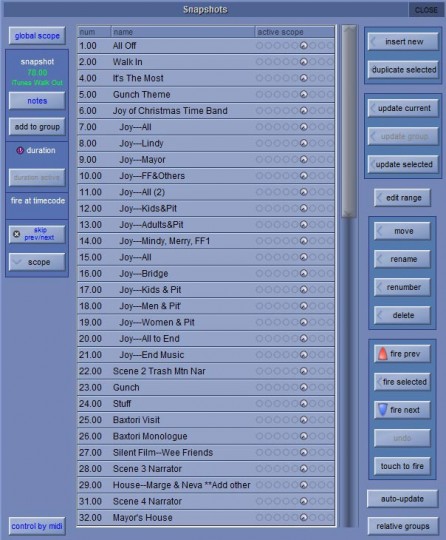 Snapshot 6 is the band snap, 7-21 are just for vocals. I indented them with spaces to make it easier to see quickly. 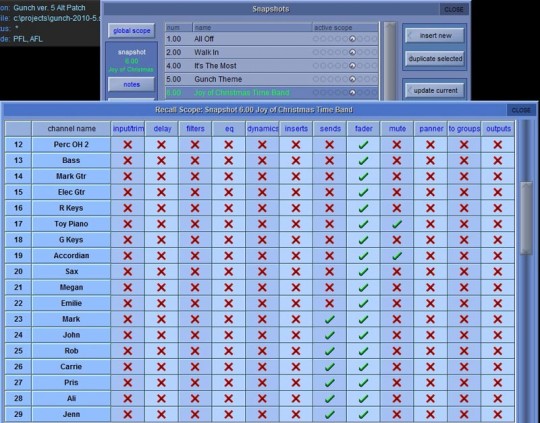 Here you can see a bit of the scope for the band snapshot. The green checkmarks tell the console to recall that parameter. I was also tweaking the monitor mix with the “Sends” parameter. 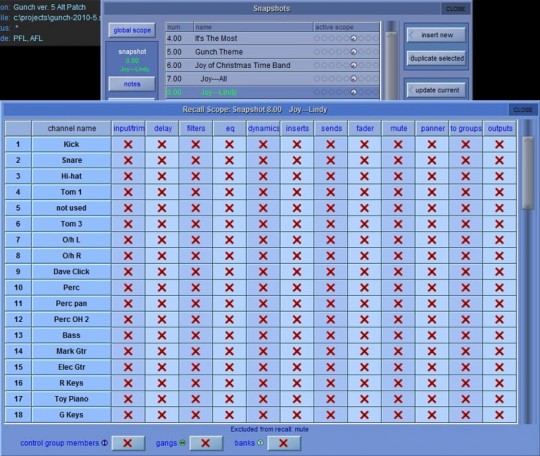 Now you can see I’m not recalling any band channels for this one, in the next you’ll see it’s just a vocal snap. 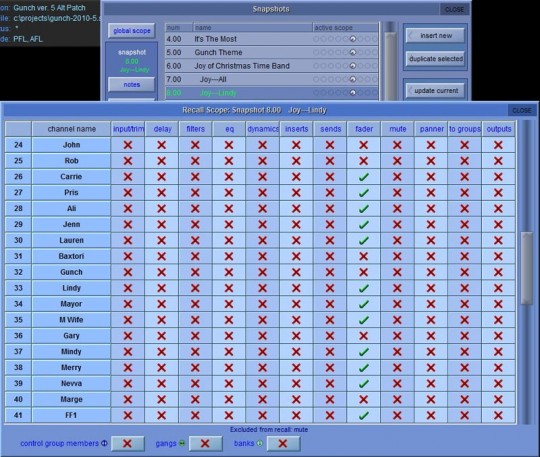 These are some of the vocal channels that are being recalled. The once that are still X’d out are characters not in the scene.Once I quickly put the snapshots in place (it took about 5 minutes during our tech rehearsal), things went much more smoothly. During subsequent rehearsals I tweaked fader positions and mix for each character and updated the individual snapshots. Because my scope was set for just the vocal mics, I didn’t worry about inadvertently messing up the band mix.

I also did some creative things to smooth out all the level changes using the crossfade times. Because the lines come up quickly, I used a very short crossfade time (4 frames) for the faders coming into the line; for example for snapshot 8, the fade time on Lindy’s fader would be 4 frames. But when I go to the next snapshot—the Mayor—Lindy’s fader will drop to off over 2 seconds. That took a little more time to write, and I did that after everyone else left.

It was really fun to mix that song, and watch the faders dance all over the surface at the touch of a button and I never missed a cue. It really is better living through technology!