How’d They Do That? Audio Routing

I know, I thought we were done with this series, too. But then my ATD, Isaiah, pointed out that I never wrote up a post about how we did all the audio routing for the show, so now I’m obligated. Actually, we had some pretty interesting problems to solve with this. If you don’t own an SD8, much of what we had to do won’t apply to you, but perhaps it will give some inspiration for solving future thorny problems.

First, let’s start off with a little drawing. 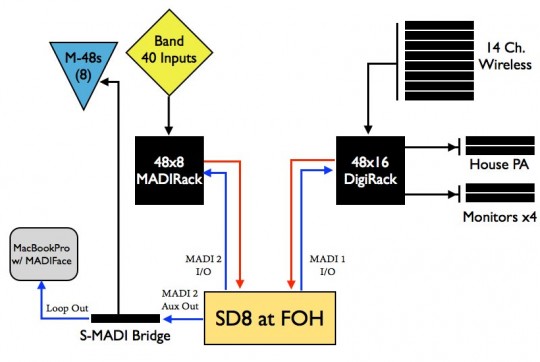 Seems simple enough, no?Our normal set up consists of everything you see there except the MADIRack. DIGiCo generously supplied the MADIRack for us because we were short on inputs. With all the wireless and a full band, choir, house mics, stage mics, tracks and click, we were well over 56 inputs. So, no problem, order up another 48. Inputs—check.

The challenge we faced was with outputs. Normally, we use a function on the SD8 called “Copy to MADI…” Basically, we copy MADI 1 to MADI 2; that is, the input channels of MADI 1 are copied to the output channels of MADI 2. They don’t pass Go, they don’t collect $100, they come in 1 and go out 2. We then feed the S-MADI Bridge (which drives our M-48 band monitor mixers) and the RME MADIFace for recording. DIGiCo thoughtfully included two sets of connectors for both MADI 1 & 2, so it’s a real easy hook up.

The problem is (as I’m sure you can see from the drawing) is that MADI 2 is now occupied by a MADIRack. Moreover, most of the channels we want to copy to MADI 2 are already coming in on MADI 2. You can’t copy a MADI bus to itself. To make matters worse, we couldn’t just copy MADI 2 to MADI 1 because we use the outputs of MADI 1 to drive our house PA and the 4 wedges (plus a backstage monitor, not shown).

My initial thought was, “Oh, no problem, we’ll just use the output of Insert A to send the band channels back out to the individual channels on MADI 2. We won’t hook up the outputs of MADI 2 to the MADIRack and all will be well.” However, when we tried it, all was not well.

First off, the SD8 didn’t like not having the MADIRack partially connected. Unless we hooked up the outputs, it refused to acknowledge they were even there. When we did hook it up, the SD8 thought there were only 8 output channels, a far cry from the 56 we’d need.

After playing with it for a while, Isaiah and Kevin discovered we could lie to the SD8. If we told it the rack in question was not a MADIRack, but a DigiRack, we could also tell it there were 56 outputs installed. Once we convinced the SD8 this was true, we could now patch the channels to all 56 outputs of MADI 2. Life was good. Nice work, guys!

At this point, the plot thickens. The S-MADI Bridge drives the M-48 personal mixers using Roland’s REAC protocol. REAC only handles 40 channels, so the S-MADI pulls the first 40 channels from the incoming MADI stream and sends them on. So we had to be very strategic in how we truncated everything down to 40 channels for the band. We ended up using 4 of the 40 channels for foldback; 2 mono and 1 stereo mix. Most of the instruments went directly out their channel Insert A output right back to the channel they came in on. For example, the kick came in on MADI 2:1, and went out on MADI 2:1.

MADI 2 channels 41-56 were used to direct the wireless mics, stage mics and house mics to the MacBook Pro we keep at FOH for multi-track recording (using an RME MADIFace). And we actually did end up recording almost a full 56 channels (I skipped the click, and one or two others…). To make that connection, we used the thoughtfully included Loop Out on the S-MADI Bridge to carry the full 56-channel MADI 2 stream to the MADIFace. Props to the Roland Systems guys for including that!

While it did take some fiddling and experimenting, we managed to pull off the entire show with this set up with nary a problem. We did run into a few limitations of overwriting MADI channels, but we figured out how to fix them quickly. There were a few head-scratching moments, but once we got it all sorted out, it was really easy to mix and run. Patching the inputs to Reaper took a little time, but I was even able to record rehearsal, run the tracks back into the SD8, tweak the mix and some of the cues, then re-set everything. It took more patching than normal (typically, we just click “Listen to Copied Audio” and the SD8 changes the input point from MADI 1 to MADI 2), but it did work.

Here’s an input sheet if you’d like to see the particulars. This image is a JPG, but if you click it, you’ll get the full 4-page input/output list. Props to Isaiah for managing the list; it changed several times, and he’s done an amazing job programming the Numbers spreadsheet to make it all make sense (and make everything an “enter once, populate where needed” affair). 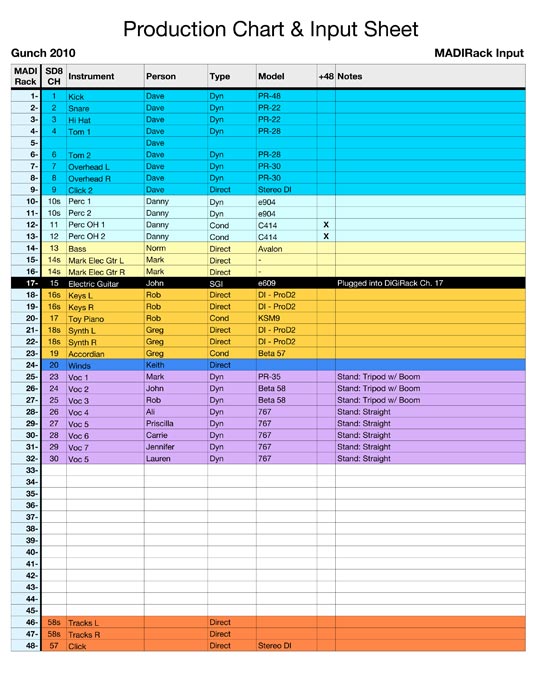 This is only page 1. Click to view/download the full 4-page PDF.
OK, I think that’s it. I think we covered Gunch fully. Next time, we’ll be starting a new series I’m really excited about (mainly because it was suggested by readers!). Tune in Friday.