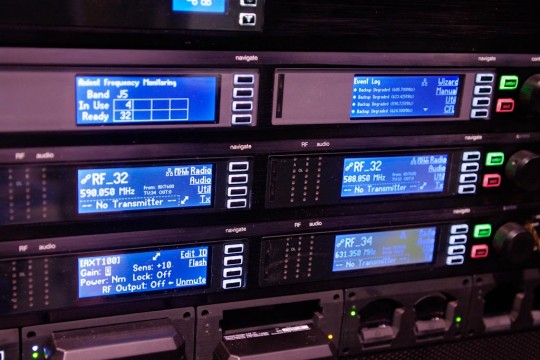 The big news was Shure’s Axient SystemOf course, the big news was Shure’s Axient system. Billed as a “game-changer,” it will certainly set a new standard for interference free wireless mics. Shure’s done up a whole mini-site just for Axient, and I encourage you to check it out for more details. The summary goes like this: Axient is an active system that monitors for, detects and automatically changes frequencies when interference comes along. During the private demo we saw, the Shure rep was speaking into an Axient handheld. They switched on a second handheld tuned to the same frequency and in well under a second, the system detected the interference, and changed channels, restoring the clean audio.
Note that the system is changing channels on both the transmitter and receiver, and doing it automatically!

Shure’s new Show Link Access PointTo make that work, you employ the ShowLink AP, which enables the system to remotely control the transmitters, and you can make adjustments to them from Wireless Workbench 6 as well. ShowLink operates in the 2.4 GHz band and can talk to up to 16 transmitters at once. Another amazing feature is Frequency Diversity. The new handheld can transmit on two separate frequencies at once and the Axient receiver will take those two frequencies, monitor them and send the best one out the single audio output. If interference hits one channel, the receiver switches to the other one (inaudibly) and picks a new frequency to replace the bad one. For for the “money” mic, you now have real RF redundancy. 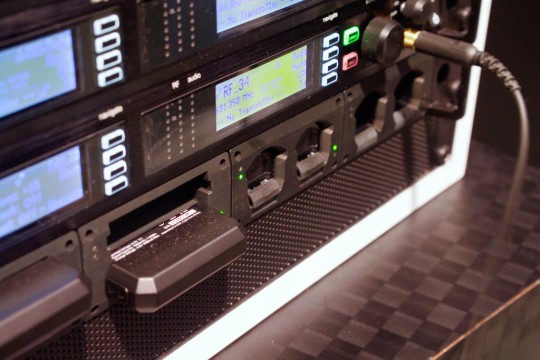 Modular recharging stations for Axient batteries.The system is also compatible with UHF-R transmitters, so you can dual-bodypack the talent and do frequency diversity as well. They’ve also developed some pretty impressive Lithium Ion rechargeable packs and chargers for the new components. Availability is said to be “Spring,” with cost being “at a premium to UHF-R.” So it’s not going to be cheap. But when you absolutely have to have rock-solid wireless, Axient is going to be the choice. 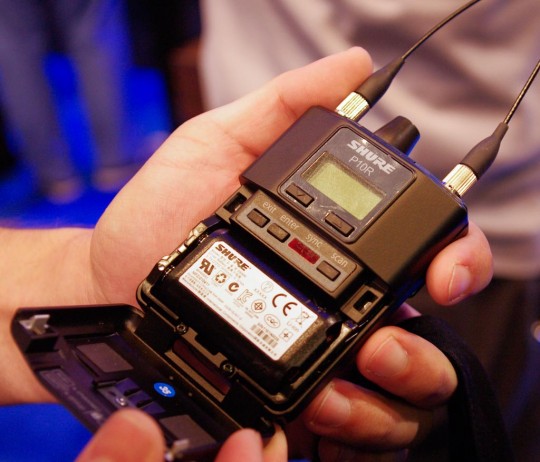 Shure P10R, part of the PSM1000 IEM systemContinuing on with Shure’s announcements, we also saw the new PSM1000 wireless IEM. The new flagship in their PSM line, the 1000 is built around a single rack space dual transmitter and the new true diversity P10R receiver. The PSM1000 should have all the audio and even better RF performance than the PSM900 (which I picked as the winner in last summer’s IEM shootout). It also has some cool new features including a 70 MHz tuning bandwidth, the ability to do a full scan of the tuning spectrum and transmit that data to the transmitter for analysis, programming or uploading to Workbench 6.

Shure PSM1000 TransmittersWe saw a single pack do a full scan of the spectrum, the data being sent via IR to the transmitter then watched as the transmitter picked 4 good frequencies and programmed all for units in the rack. It’s pretty impressive. This product should be available shortly at a price higher than the PSM900.