Today I’m going to try to make sense of some of the most useful and perhaps misunderstood faders on a mixing board, the VCA (or on a digital board, the DCA). Right off the bat, I should acknowledge that not all mixers have VCAs. They are typically found on larger-framed analog consoles, and most digital boards have some implementation of them. VCAs are known as VCAs on every analog desk I can think of; however digital manufacturers call them by various names: Yamaha has DCAs, DiGiCo refers to them as Control Groups and most everyone else just calls them VCAs. Regardless, they all act pretty much the same. It’s important to note a VCA is not the same as a group, though they are often used similarly.

A group is an actual mix bus; that is, a set of channels are sent to the group post-fader and are thus “mixed” to that bus or group. For example, if I was using Group 1 for my drums, all of my drums would be mixed to Group 1, and the output of Group 1 would then go to the main L&R mix (after the Group 1 fader, of course). That can be very useful for a lot of reasons, but it does add an additional gain stage.

VCAs on the other hand are sort of like a remote control for the set of channels assigned to that VCA. VCA stands for Voltage Controlled Amplifier. Basically what the VCA control does is affect the signal coming off the faders for every channel in the VCA group. So, if you lower the VCA control by 10 dB, it is like lowering each individual channel fader in the VCA group by 10 dB as well, only the faders don’t actually move.

The difference is that typically (but not always) the channels controlled by the VCA are sent straight to the main L&R mix, without going through a Group mix. Sometimes VCAs and Groups are used together, and there are very valid reasons for doing that, but for the purposes of this discussion, we’ll assume that all the input channels are going straight to the L&R mix.

By now, this is starting to get confusing, so let’s look at some visuals. In this example, I’m using three input channels, Kick, Snare and Hat, and a single Drums VCA control. These images come from the DiGiCo SD8 software because they include a handy gain indicator which makes it easy to see what’s going on. However, the concept is the same regardless of what desk you’re mixing on, analog or digital. The same thing is going on behind the scenes, it’s just that DiGiCo makes it easy to peek behind the curtain. 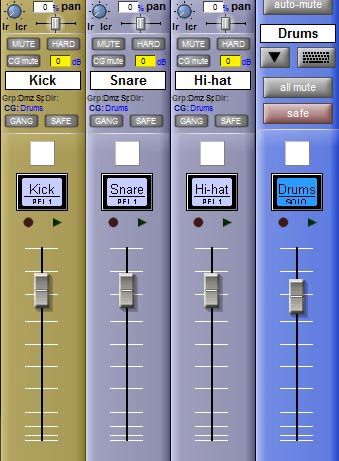 So here we are in our example. Notice the yellow-highlighted box; all three channels are currently at 0 dB, or unity (the faders are not adding nor subtracting gain from the signal). You also see that the blue strip labeled “Drums” is also at unity, which means it’s not acting on any of the channels assigned to it. To make it clear what’s going to happen, let’s move some faders around. 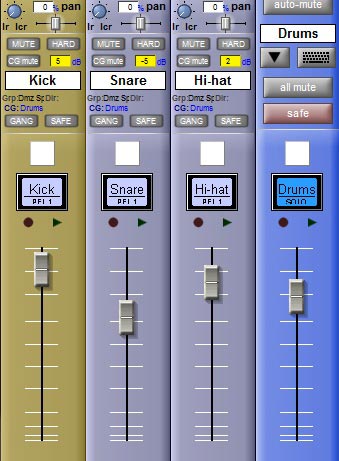 Now you can see we’ve boosted the kick by 5 dB, cut the snare by 5 dB and boosted the hat by 2 dB. The VCA is still at unity, so it’s not acting on the channels yet. This is where the fun begins. One of the great things about VCAs is that they affect the individual channels by the same relative amount. So you can raise or lower the VCA and while the individual channels will go up or down, they will do so maintaining the relative balance between them. Not clear? Check this out. 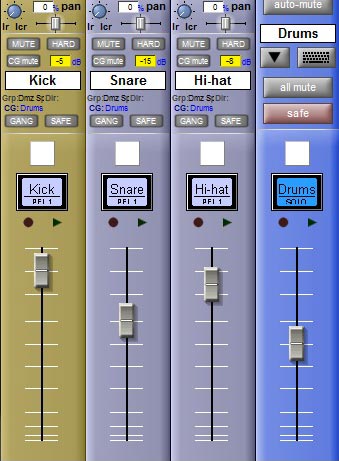 Anyway, you get the idea. VCAs also work the other way. 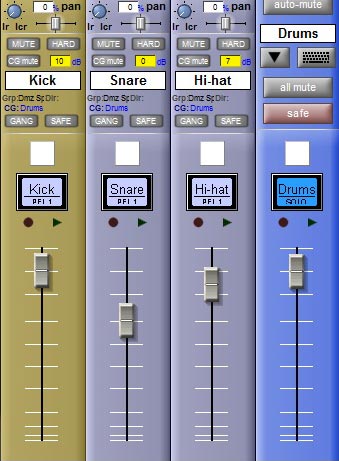 Here I raised the VCA by 5 dB, and you can see it adds 5 dB to each channel. VCAs are wonderfully useful for controlling a large group of inputs with a single fader, perhaps the best example is the drum kit. You might have 8-10 mics on a good-sized kit and trying to raise or lower the overall level of the drums all at once is very tricky, especially if you’ve turned some faders up and some down. With a VCA, it’s a simple matter of moving the single VCA fader to make them louder or softer.

I also use VCAs for turning the band on and off. I have 4-5 VCAs set up for the band and vocals and by grabbing all them, I can quickly dispatch all 20 or so channels of the band. 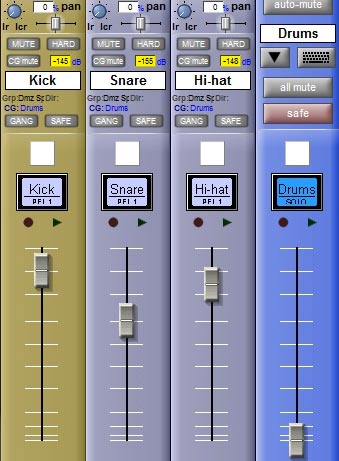 Here you can see that the VCA fader is off and the channels are showing significant amounts of attenuation. While not completely off, they are effectively off, and that’s good enough for my purposes.

Different boards use various methods for assigning channels to a VCA, but it’s not hard. Sometimes there are VCA assign buttons on each fader, other times, it’s a matter of selecting the VCA, then selecting the channels you want to include in that VCA’s control.

It’s important to note that it is possible to have multiple VCAs controlling the same channel, and in that case their effects are cumulative. It’s easy to assign a channel to a VCA, then turn that VCA off and not be able to get signal out of the channel, even though the fader is at unity. I used to get caught by this on the M7 all the time. When you start working with VCAs, start slowly until you get comfortable with them. They’re not hard to use, and are immensely useful. Once you master them, they can make your mixing a lot easier.