Sixteen channel personal mixers are not new, nor is there a shortage of them. However, the myMix offers an interesting take on the concept. Introduced a few years ago, I was initially excited about the system. But then I learned that the only way to get inputs into the system was to plug into each individual mixer, two channels at a time. I liked the interface, but that mode of inputs just didn’t work.

The folks at myMix heard that, and set off to develop an input module. Now that it’s possible to get 16-32 channels on the network using a module, now we have something to talk about. So to start off, let’s consider the components of the system.

To get signal into the system, you can use the IEX-16L or IEX-16L-A input expansion module. Both feature 16 analog inputs on DB25 connectors; the -A model adds two ADAT inputs. You can mix and match input types in groups of 8; so 8 channels analog, 8 channels ADAT or all 16 via the same type—unless you don’t have the -A model, then it’s all analog. myMix sells some cool DB-25 break-in cables that conveniently include both TRS and XLR inputs on the ends. It makes for a slightly messy install, but having both cable ends eliminates a lot of adapting issues.

Once you have your 16 channels on the network (you can actually combine two input expanders on the network to put 32 channels on the digital network), the next piece of gear is a POE Ethernet switch. myMix offers a nice, 8-port Cisco version with two gigabit ports as part of the system. Finally, you use a Cat 5 cable to connect to the myMix mixer. At NAMM this year, they also introduced the myMix Control, which is a software that gives you networked control over all the input modules and myMixers on the network. More on that in a moment.

myMix took a whole new approach to the personal mixing interface. Instead of a blank panel punched through with encoders, there is a nice large LCD screen with a single large knob at the bottom. Four buttons along the right side select various menu elements, and two buttons below the screen mute or start and stop recording. That’s right, you can multi-track record your 16 inputs to an SD card using the built-in card slot.

Initially, I suspected the single-knob approach would slow the user down, and make it harder to use. But when I played with it at NAMM, I actually found it to be fairly quick to get around on. That was confirmed when I set it up in the Palatial Studio. After configuring the 16 inputs, it didn’t take long to build a mix. Each input has level, tone, pan and effects send options. To use the mixer, spin the knob to select the input you wish to adjust. A single press brings up the volume. The four buttons on the right select the other options. When finished, a second press of the knob returns you to the overview screen. It’s all fairly intuitive and easy to use. 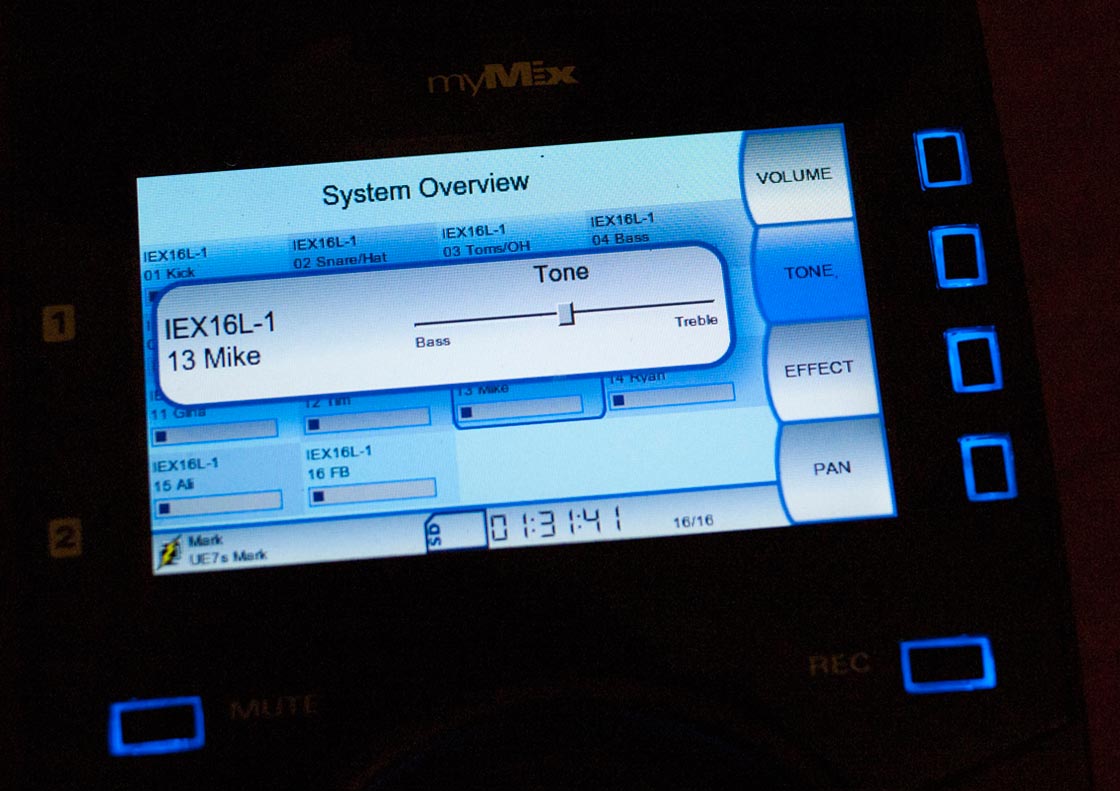 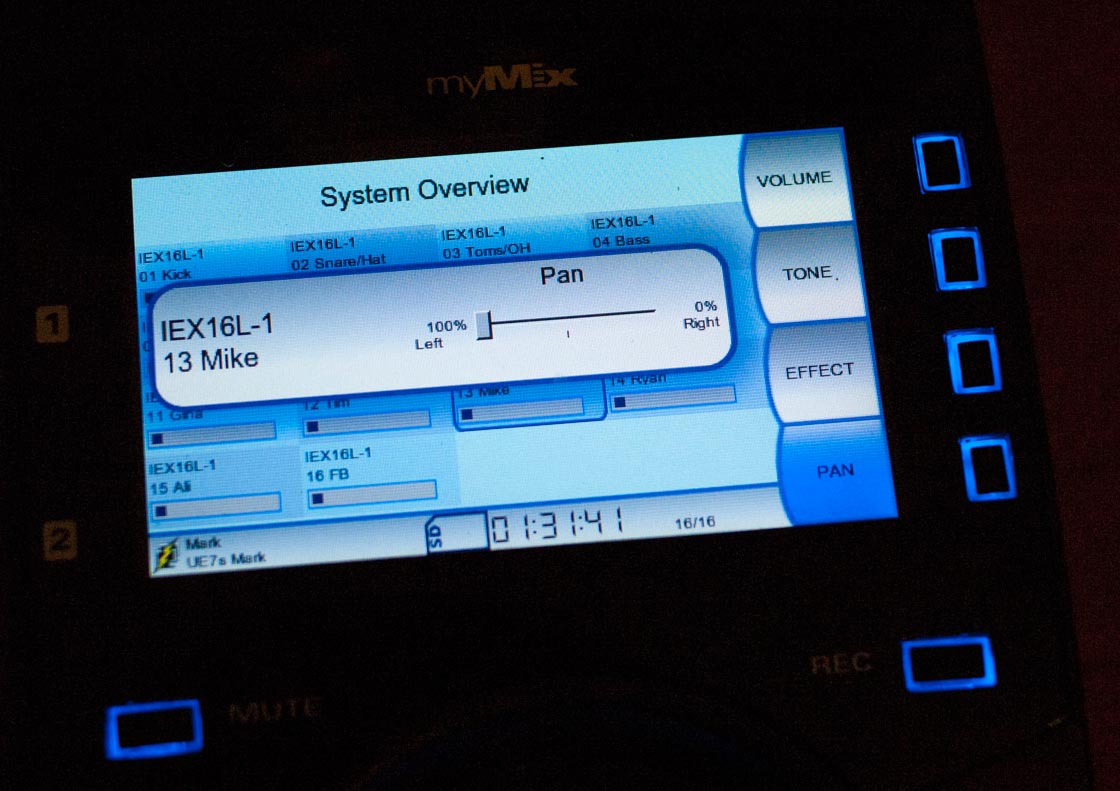 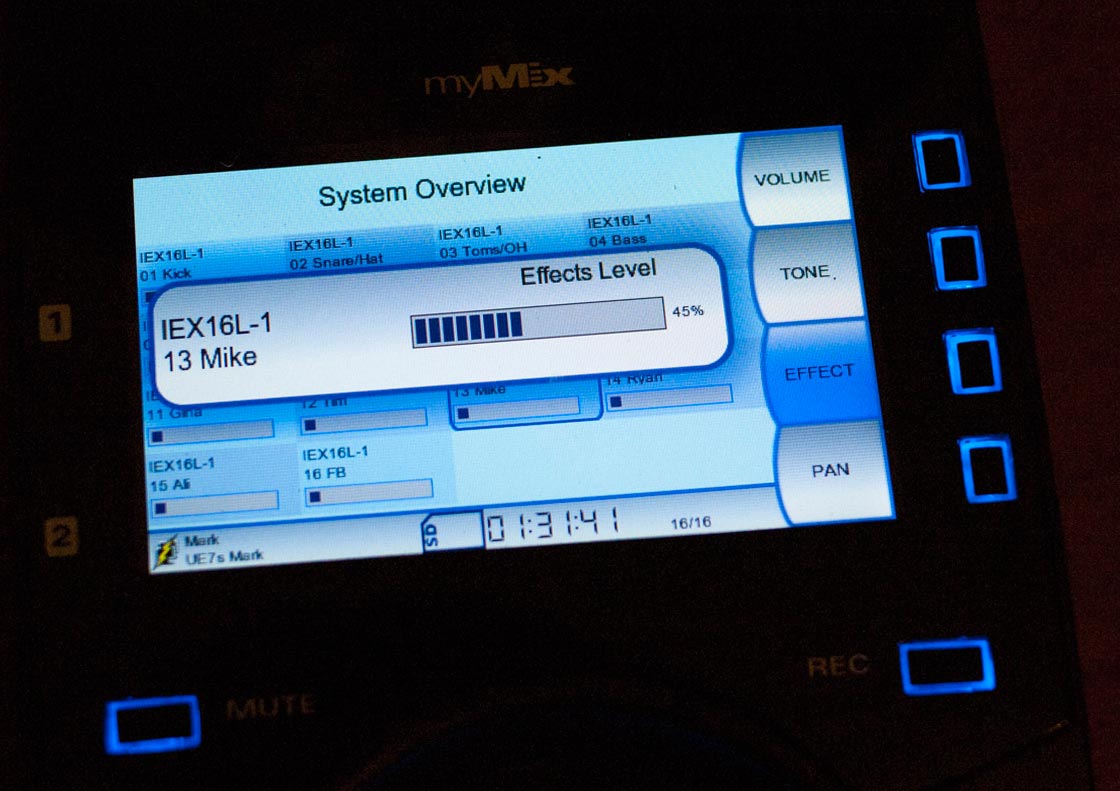 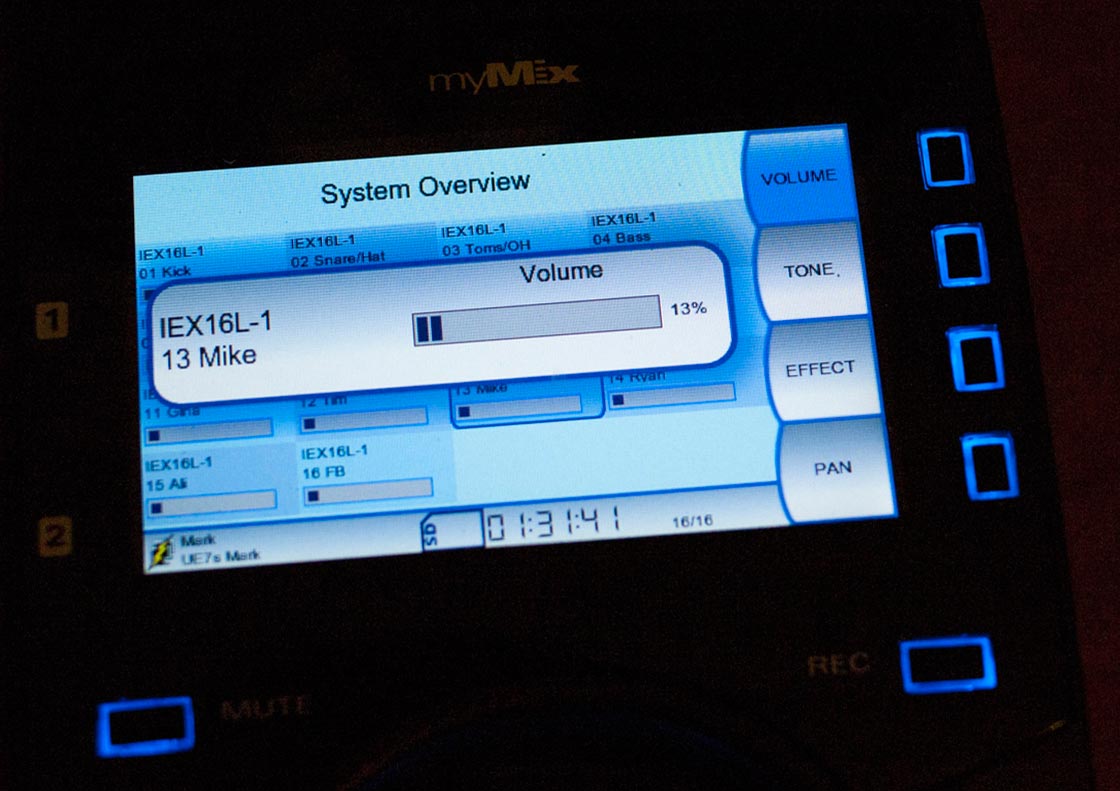 The only criticism I have up to this point is that the type on the screen is pretty small. We have some older musicians on our team and I suspect some would have an issue reading the channel labels. Since I lost my progressives a few weeks ago, I’ve noticed that small type is a bit of a challenge, so I put myself in this category. Thankfully, the screen is illuminated and sharp. You can also select a list view of the input channels, which makes the type a bit bigger. You do end up with a little more scrolling, however. 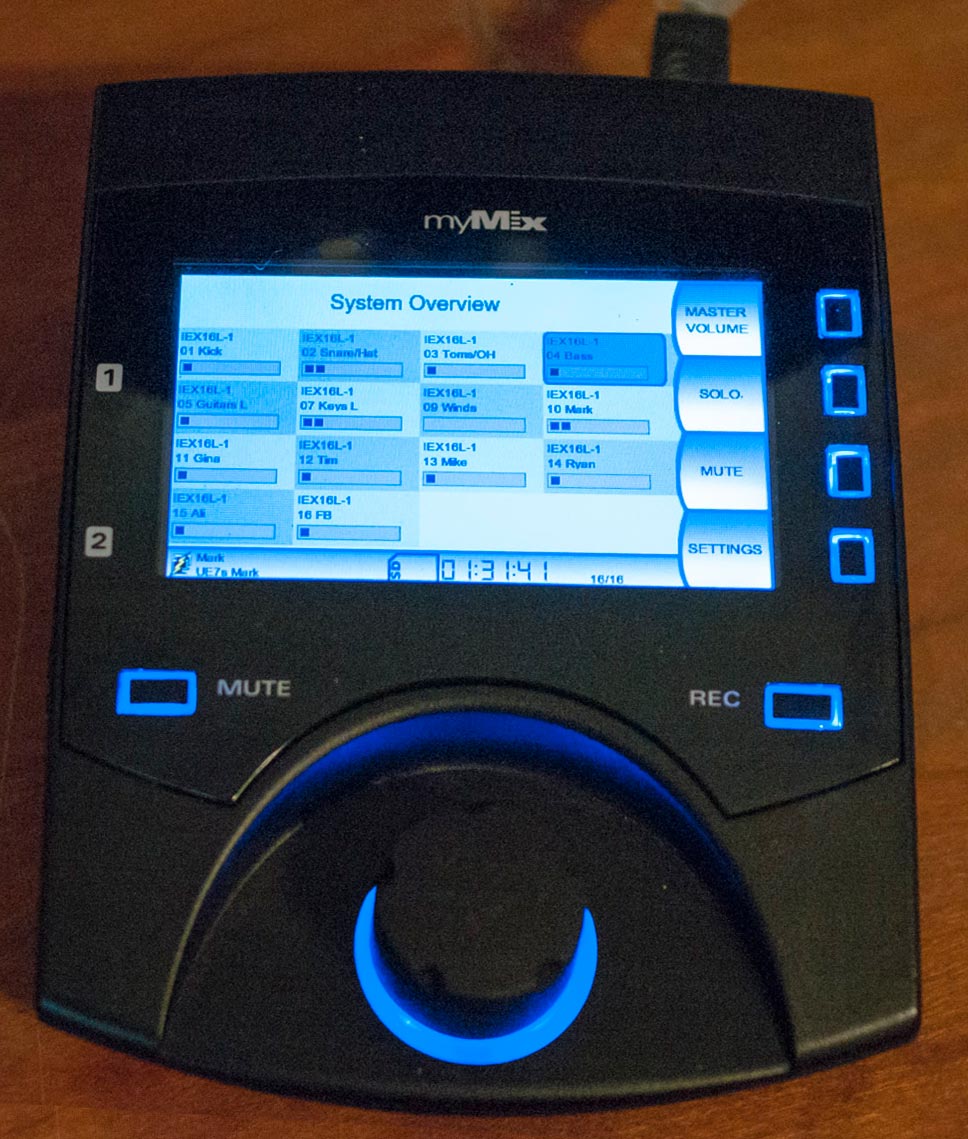 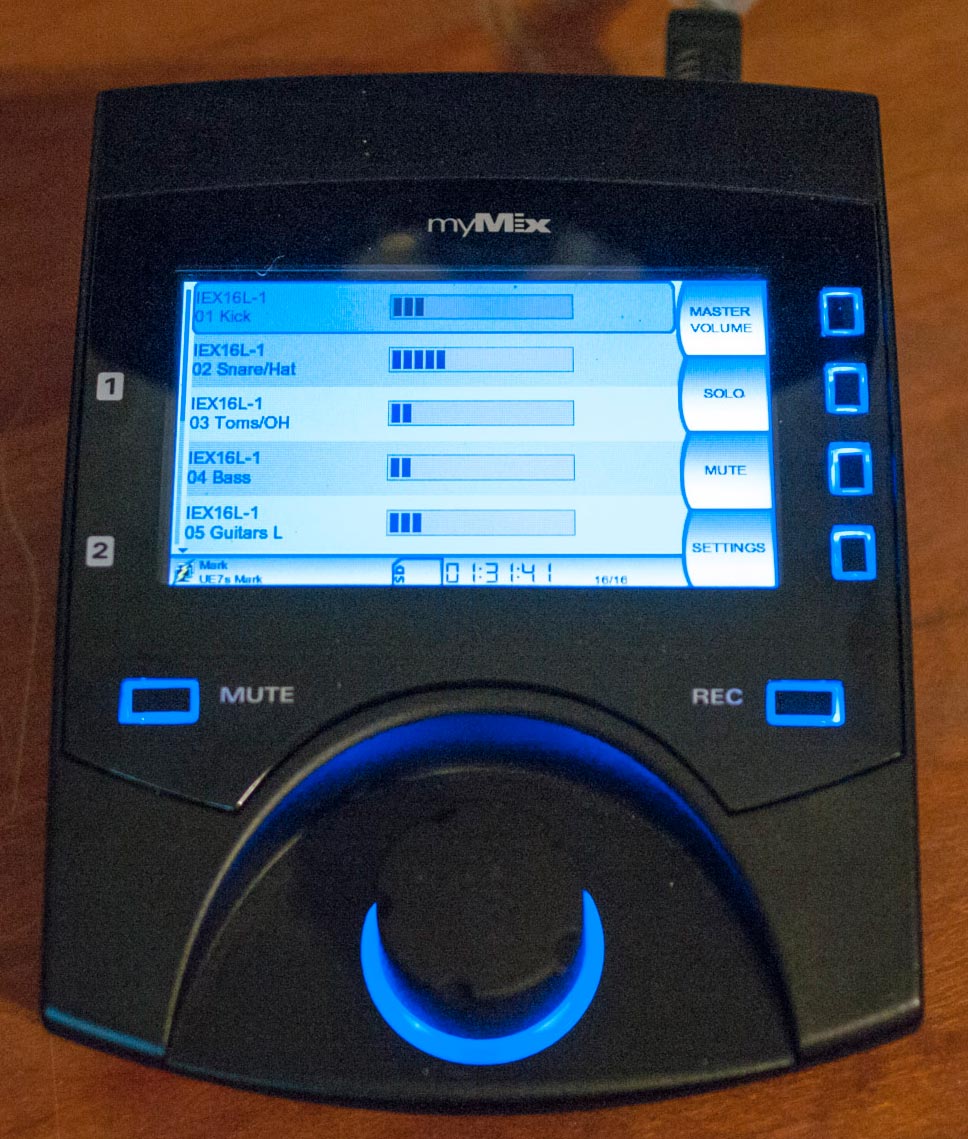 Each myMix mixer also has two XLR/TRS combo jacks on the back. These are inputs, that can be used for each musician’s channels, and/or sent out to the network. One model for use is to have each musician plug their instruments into the myMixers, then everyone on stage can select from everyone’s inputs. A “FOH” mixer could be used to dial up a house mix. In this set up, you wouldn’t even need an input module. It also assumes you’re not mic’ing the full drum kit with 8-10 mic’s.

I suspect that club bands would use this feature more than churches, so I didn’t play with it much. However, for a smaller student or kids venue, that might be useful… Another very clever design feature is the mic-stand mount. It neatly integrates into the bottom of the unit using a single captive thumbscrew. Once the mount is in place, you screw it to the top of any standard mic stand. If you want to set one on a desk, you remove the mount, and four rubber feet protects the surface. 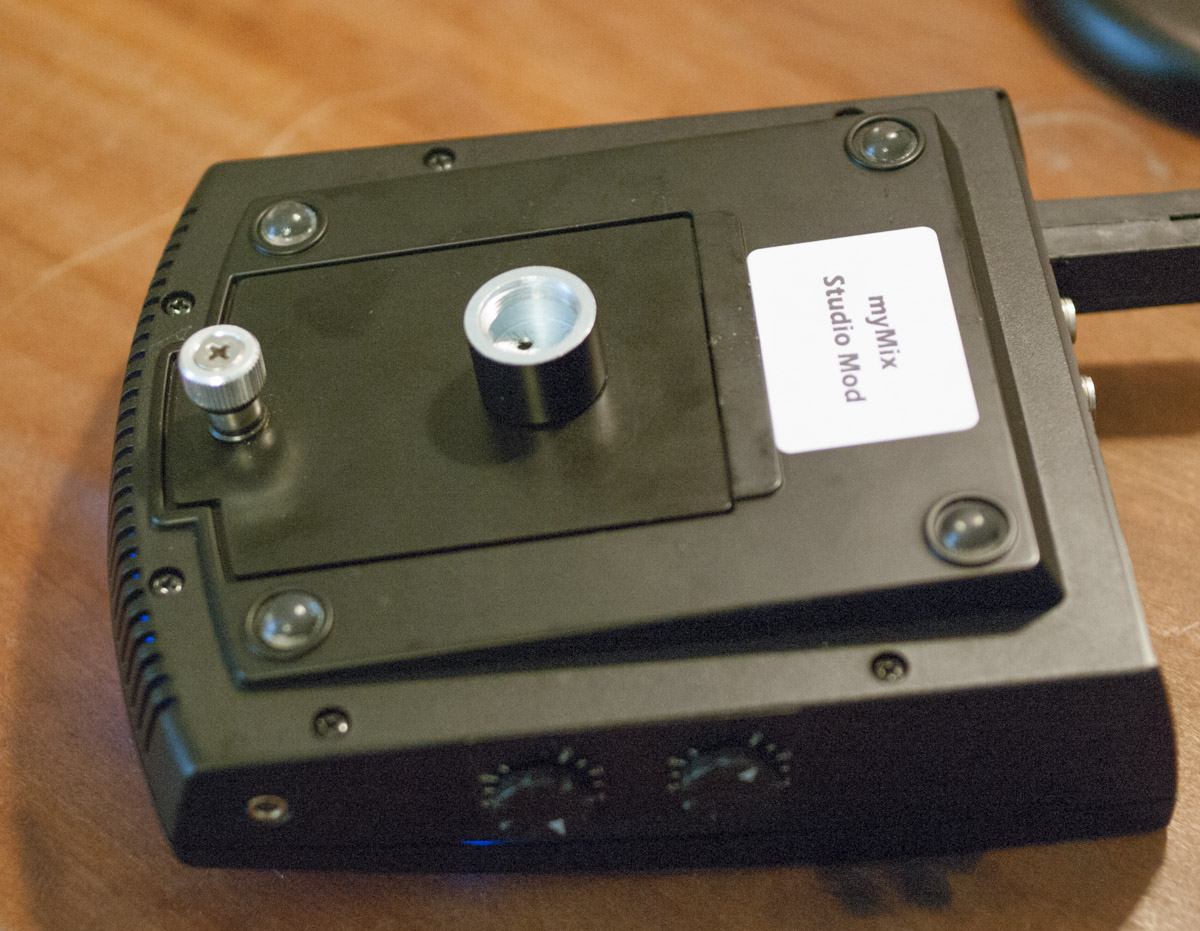 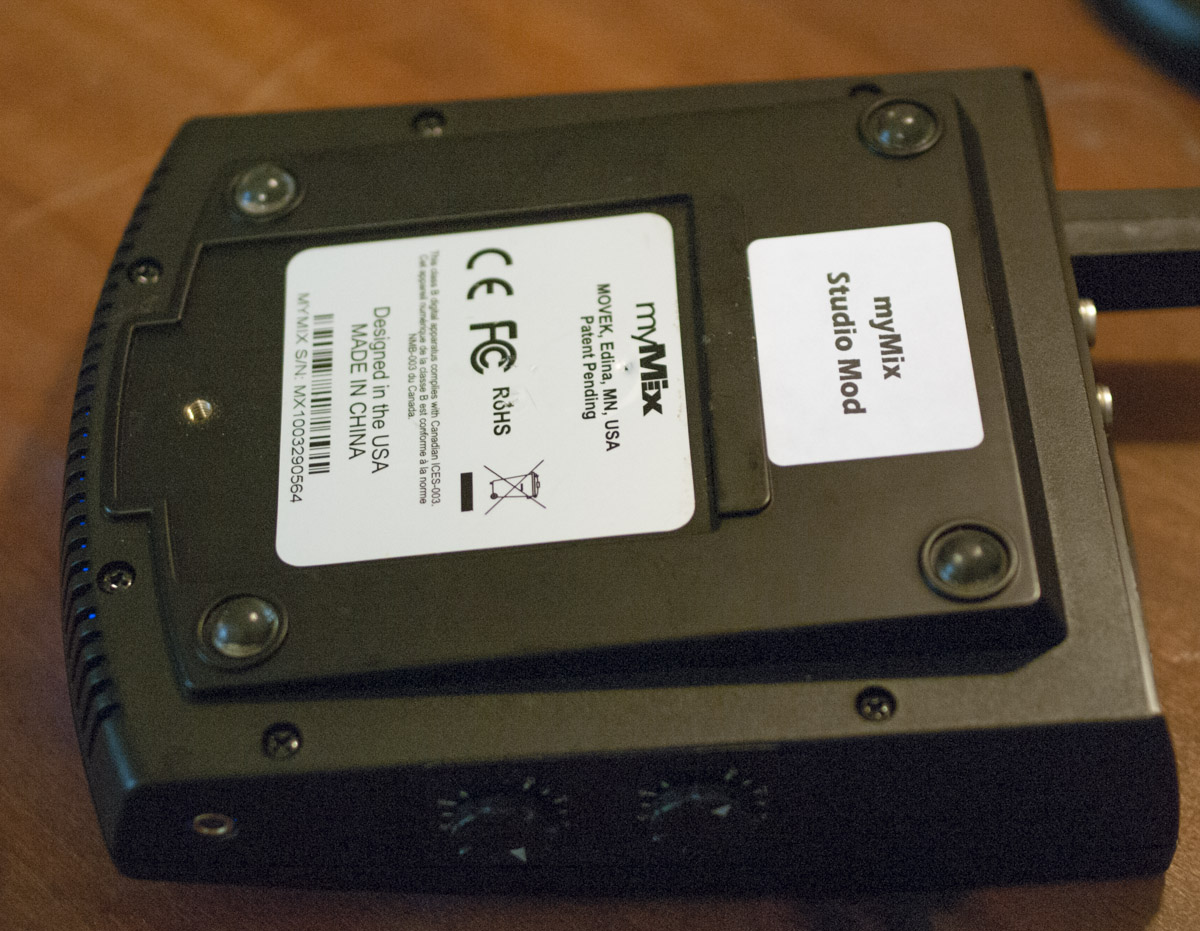 So that gets us through the initial set up and basic components. Next time, we’ll see how it works, and more importantly, how it sounds.

Today’s post is brought to you by Horizon Battery, distributor of Ansmann rechargeable batteries and battery chargers. Used worldwide by Cirque du Soleil and over 25,000 schools, churches, theaters, and broadcast companies. We offer a free rechargeable evaluation for any church desiring to switch to money-saving,  planet-saving rechargeables. Tested and recommended by leading wireless mic manufacturers and tech directors.

And by GearTechs. Technology for Worship is what they do. Audio, video and lighting; if it’s part of your worship service, and it has to do with technology, GearTechs can probably help. Great products, great advice, GearTechs.