This past Easter, I had the chance to try out a set of Sennheiser 2000-series wireless IEMs. We’ve written these up in the past, but I heard from a number of people that something must have been wrong with our test sample. So I wanted to give them another shot, and I’m glad I did.

The unit we received was an SR 2050 IEM dual transmitter and a pair of EK 2000 IEM receivers. Physically, the EK 2000 looks just like pretty much every other Sennheiser bodypack. It’s a metal case, so it will stand up to the occasional drop to the floor, and has a single antenna. A 1/8” headphone jack and volume control make up the top controls. The standard orange-backlit LCD display is on the face, giving you all the pertinent information.

The SR 2050 is a single rack space unit with dual transmitters. The large, easy to read display will flash red if there is a warning requiring your attention. The rear of the 2050 has a pair of XLR inputs, along with a pair of TRS loop out jacks. Two RJ45 ports allow you to connect and control the system using Wireless Systems Manager (the two transmitters act like separate units in a single rack space, so you need to connect both to the network). A pair of antenna outputs are also found back there, one for each channel. AC comes in on a standard IEC cable, so no nasty wall-warts.

As you would expect from a system at this price point, you have a lot of options. The system will tune to about 3,000 frequencies over a 75 MHz bandwidth. As Sennheiser is a global company, they make many versions to cover everything from 558 MHz-932 MHz. Models for the US take up 75 MHz swaths between 518-698 MHz.

One interesting feature of the EK 2000 IEM body pack is the adaptive diversity reception it employs. Essentially, it uses the cord of the ear buds as a second antenna, which cuts down on drop outs and RF issues. In practice, we found them to be quite reliable, once we got our frequencies coordinated properly. For Easter, we had 12 wireless mic’s on stage, plus 8 channels of IEMs. It took a few passes at getting a full set of compatible frequencies, but once we did, all was good.

While we didn’t use it during the services, once I brought the units back to the Palatial CTW Studio, I tried out the built-in 5-band EQ on the transmitter. It worked surprisingly well, and might be rather handy to correct for deficiencies in a set of IEMs for example. While you could do the same thing on the console, making a quick adjustment on the stage might be a good thing once in a while.

In my listening tests, I was struck by a few things. First, with no signal present, there is a slight background hiss; something I find common with most Sennheiser IEMs. Once the music gets going it’s not really noticeable, though it is more pronounced than our Shure PSM 900s and 1000s. But once the music gets playing, two things stood out. First there was an excellent sense of clarity and dynamic range. I tried them with both my UE7 customs and UE900 universal fits, and the signal sounded great with both. Sennheiser uses what they call HDX companding for “crystal clear sound.” I won’t argue with that—it does sound really good.

Second, stereo separation is really, really good. Shure and Sennheiser use different methods for deriving stereo in their IEMs, and while Shure might have the edge on noise and possibly RF performance, Sennheiser takes stereo to a whole new level. The ability to precisely place individual elements in the stereo field can be the difference between a good IEM mix and a great one, so this is kind of a big deal.

We found battery life on the receivers to be excellent. I would say on average, we were one bar higher on the 2000s compared to the PSMs at the end of a rehearsal or performance day, using the same Ansmann 2850 MaH batteries. The 2000s also have charging contacts on them for use in their own recharging cradles. 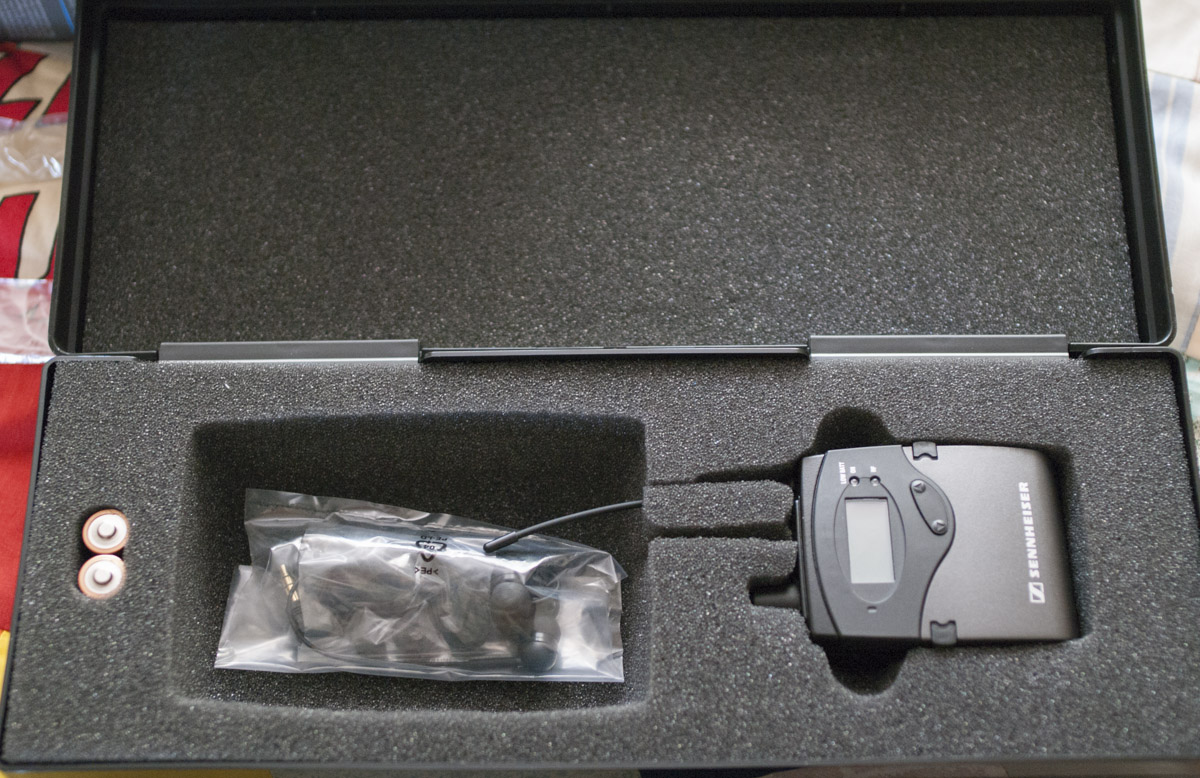 Additional features on the receiver include an adjustable high boost mode to compensate for less than ideal IEMs, and selectable stereo or focus mode. Focus mode is basically a “more me” mode; you run a full monitor mix to one input and a direct out into the other. The artist can then adjust the balance between the overall mix, and their own voice or instrument. In this mode, the system obviously goes into mono, but it might be good for artists who really want to control their own level. Or for the ones who are constantly badgering you for “more me.”

Something I’m not sure how I feel about yet is Sennheiser’s decision to treat the two transmitters in the 2050 as completely separate units. On a Shure PSM1000, you have one headphone jack that is switchable between each transmitter. Shure’s is also a 1/8” jack, so you don’t need to hunt down an adapter for your IEMs. Sennheiser uses a 1/4”, which is arguably more professional, but keep a bunch of adapters on hand.

Shure also uses a single menu control, which makes adjusting parameters easy. On the other hand, you could have two people working on each channel of the 2050 without interfering with each other. I don’t think one way is better than the other, unless you have just two channels to monitor (then Shure is easier).

You certainly wouldn’t go wrong with a 2000 series IEM; it sounds and works great. Whether or not it’s worth the price premium is something you’ll have to decide. But it is a good system, that’s for sure.

Today’s post is brought to you by Horizon Battery, distributor of Ansmann rechargeable batteries and battery chargers. Used worldwide by Cirque du Soleil and over 25,000 schools, churches, theaters, and broadcast companies. We offer a free rechargeable evaluation for any church desiring to switch to money-saving,  planet-saving rechargeables. Tested and recommended by leading wireless mic manufacturers and tech directors.