Several people have asked if I was going to write up our set and program from Christmas Eve. Since that’s pretty much what I do, here you go! This Christmas Eve was a lot like the past two, at least from a programming perspective. The look has been similar but different each time. In 2011, we stopped doing our big Christmas production and instead did Simply Christmas; four services on Christmas Eve. I joked at the time that I was glad we didn’t do Complicated Christmas, because from a production standpoint, it was anything but simple. But we made it work. 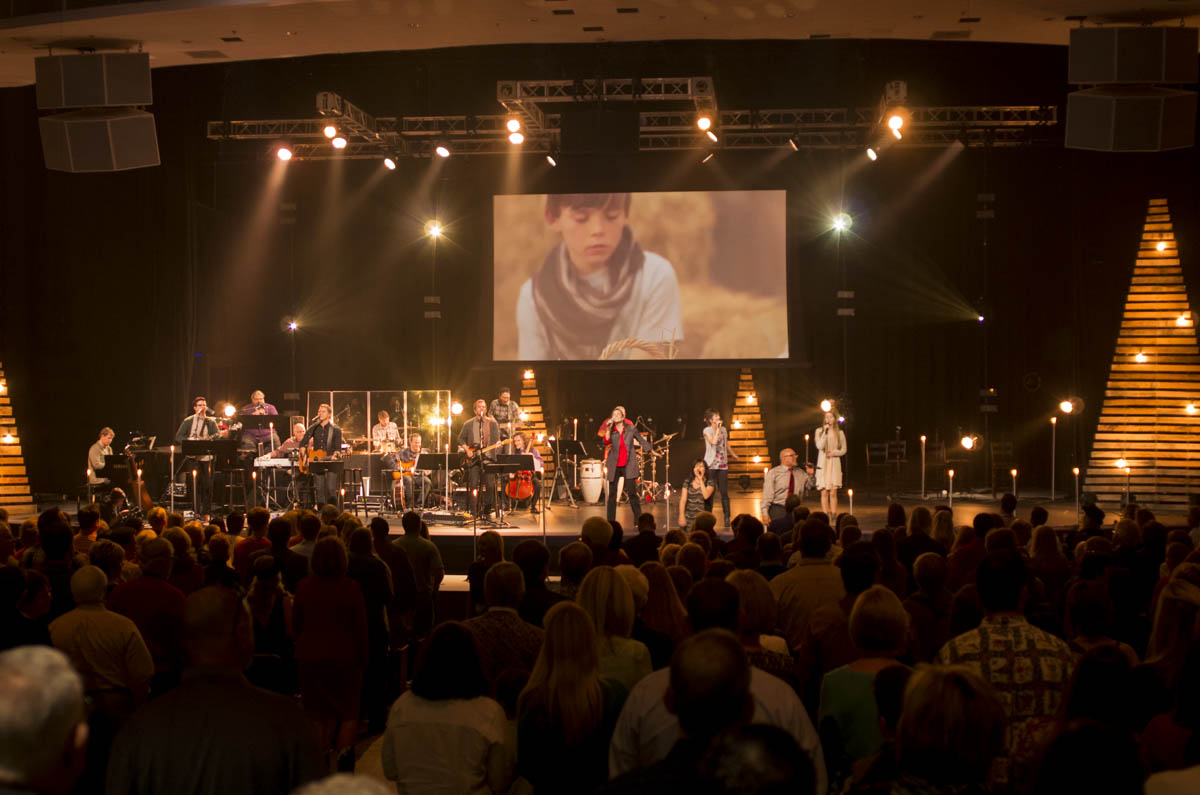 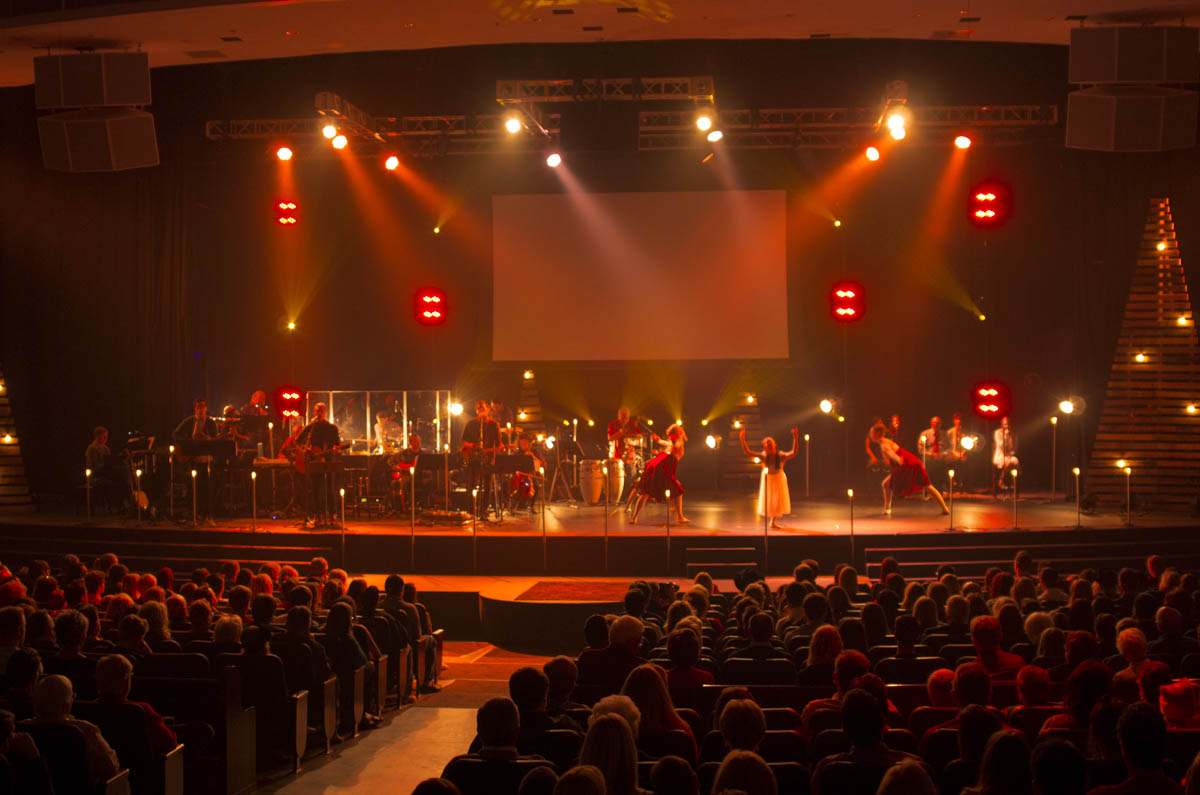 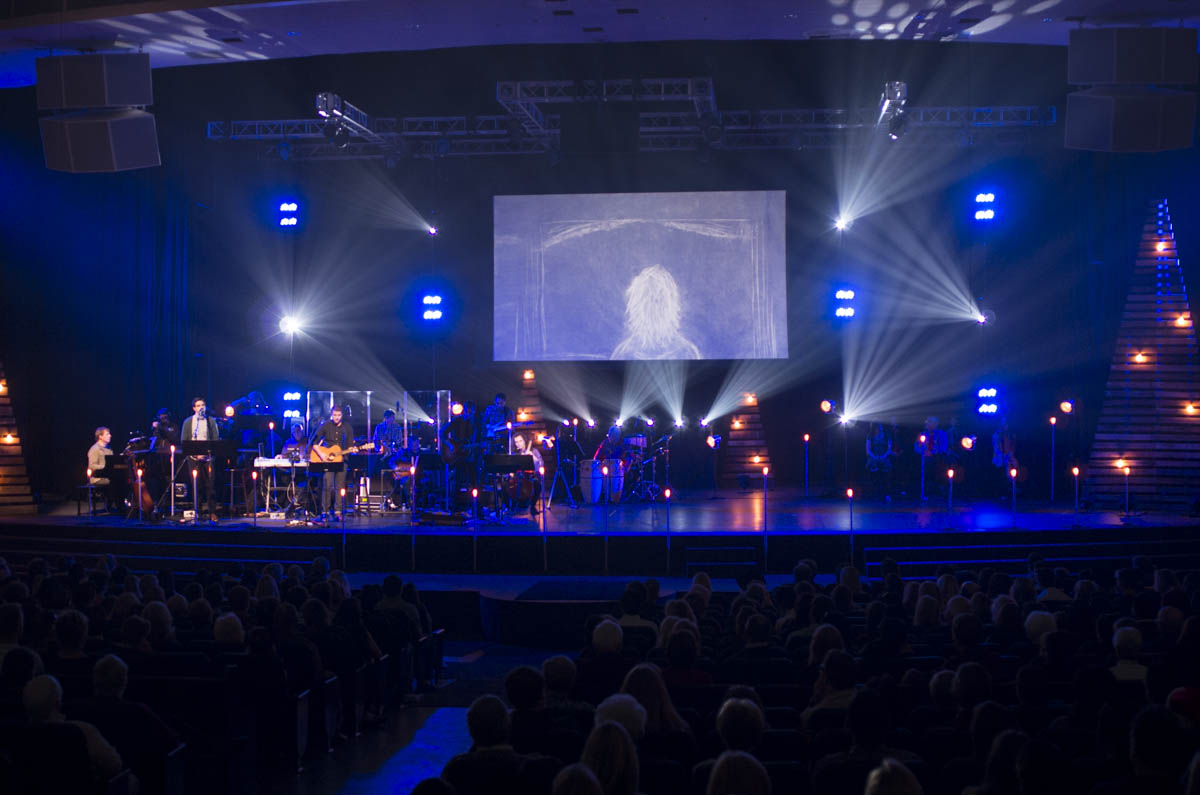 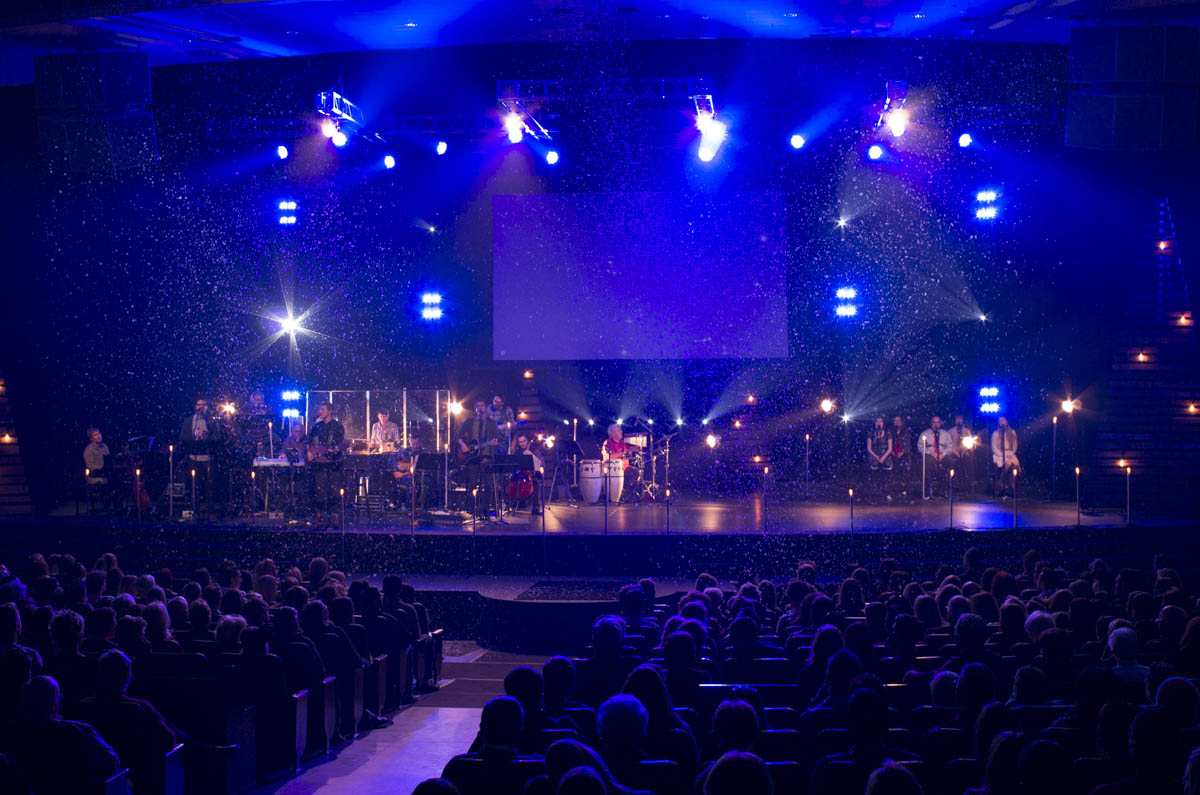 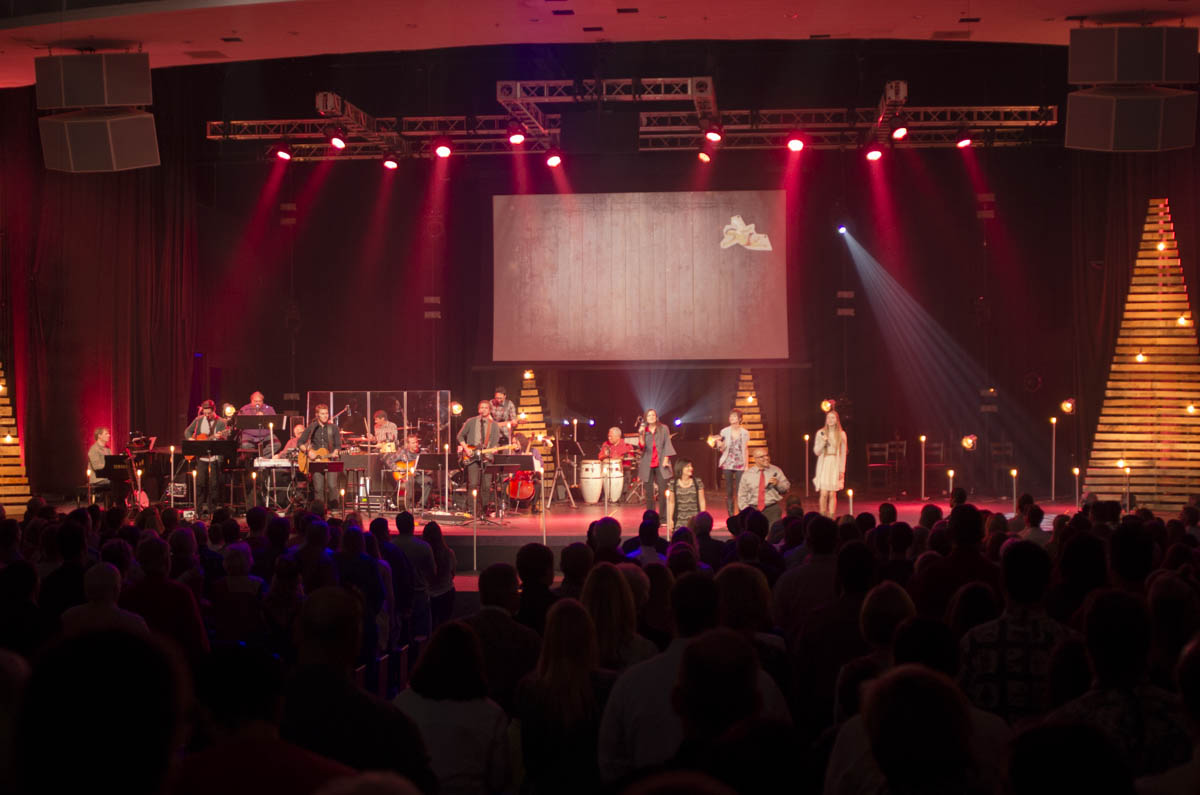 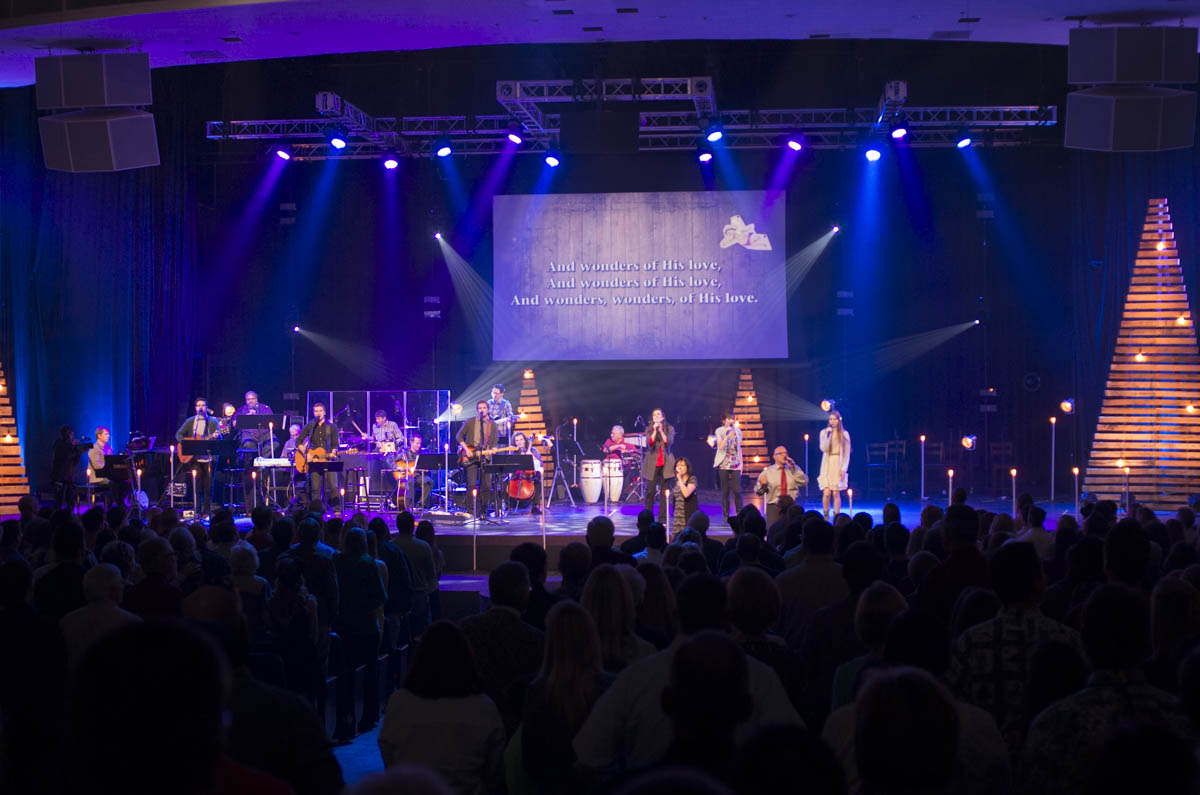 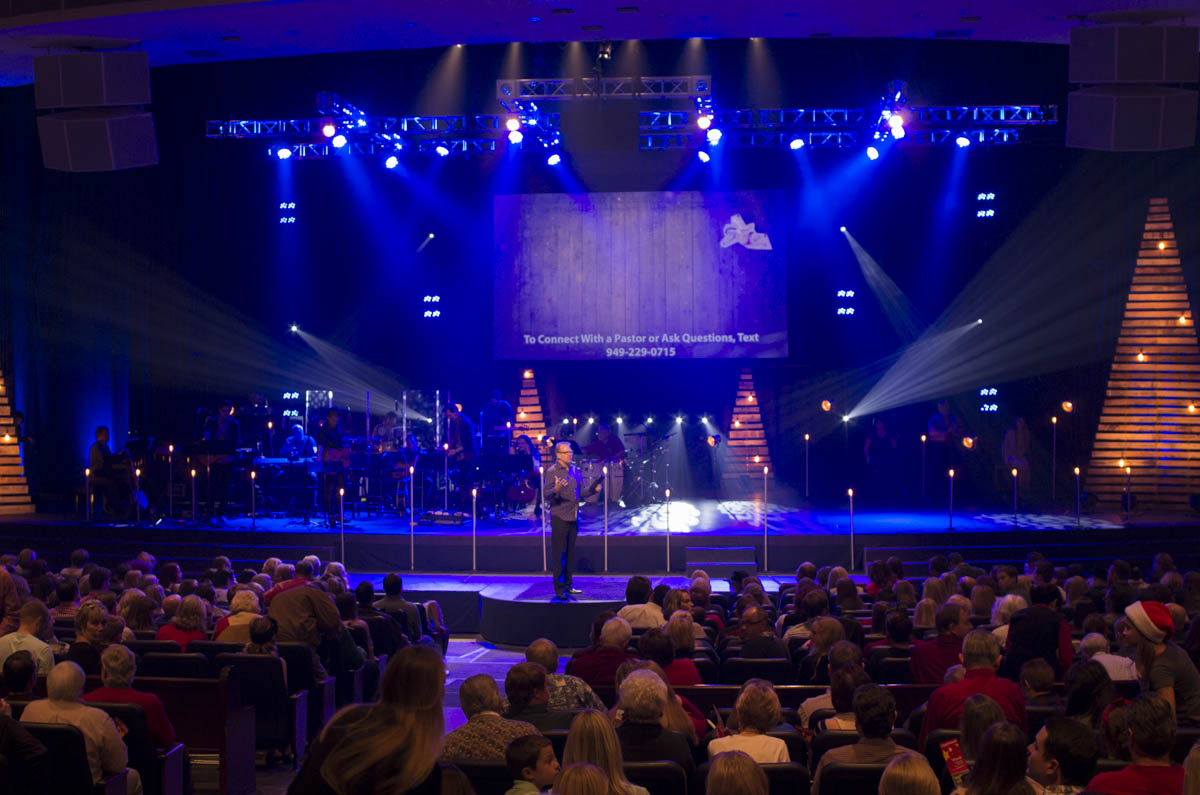 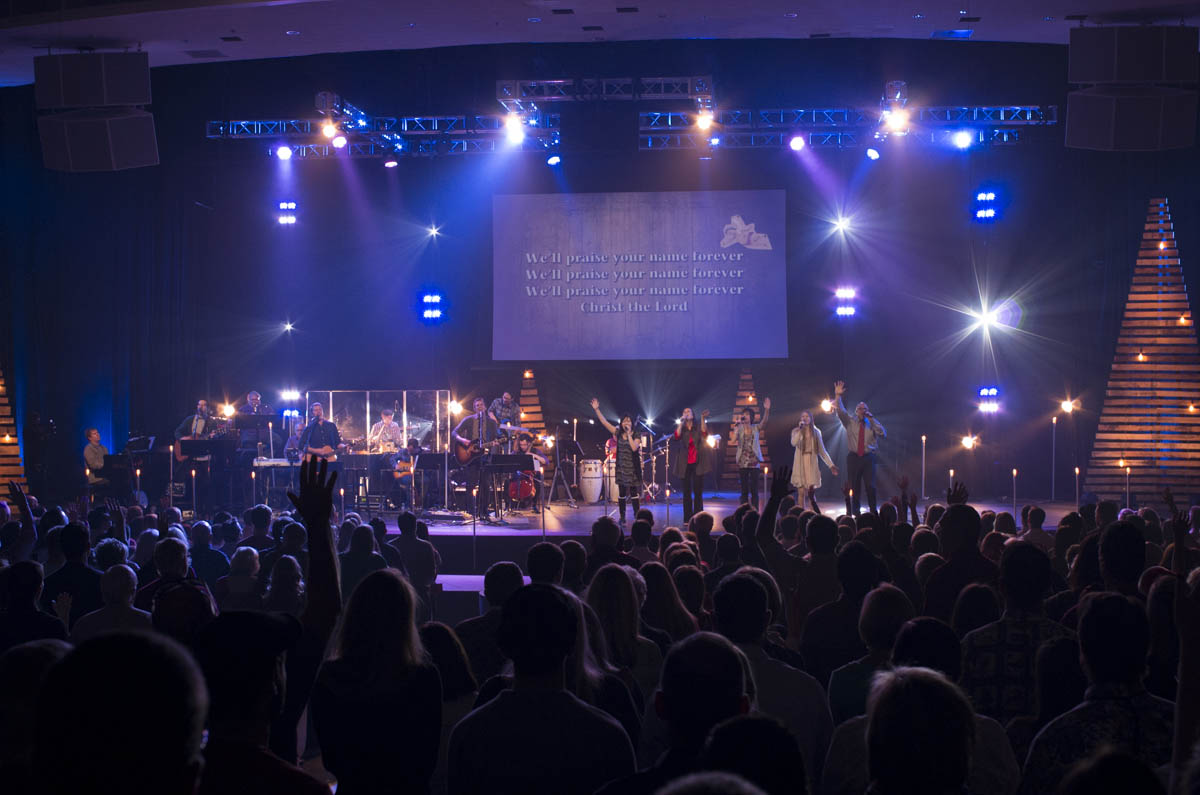 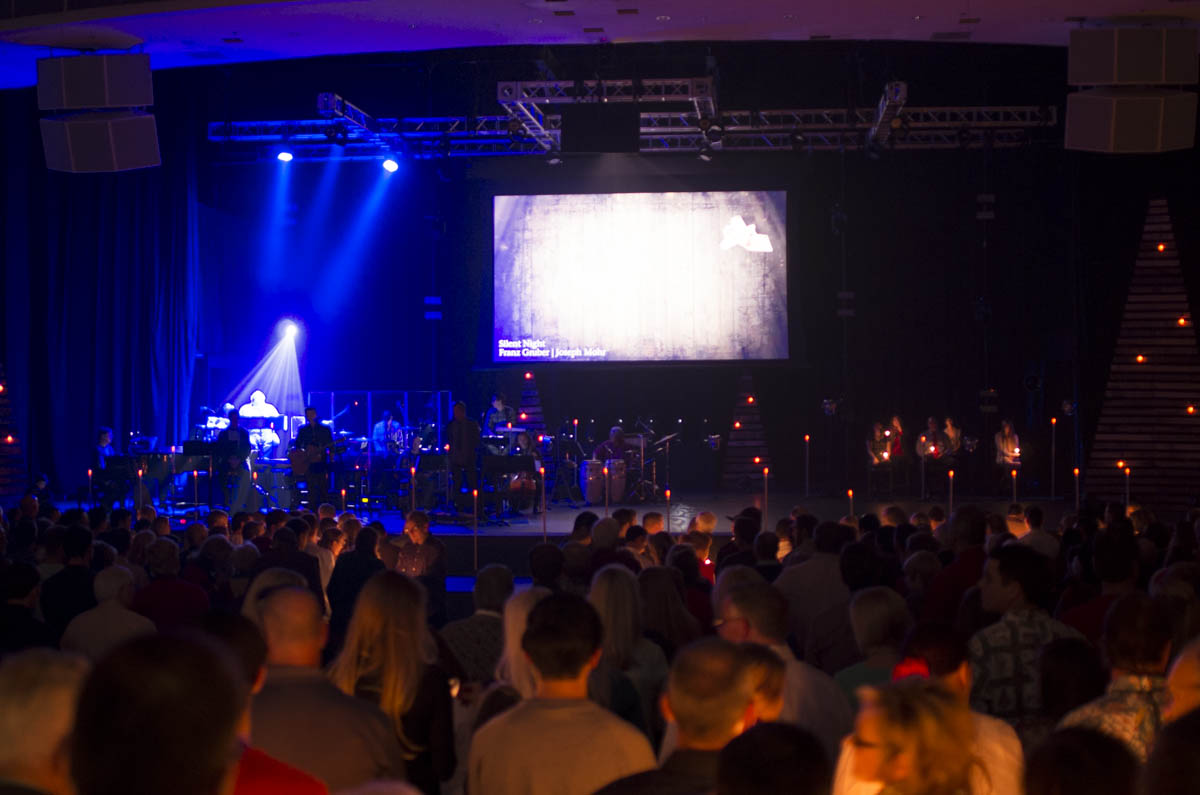 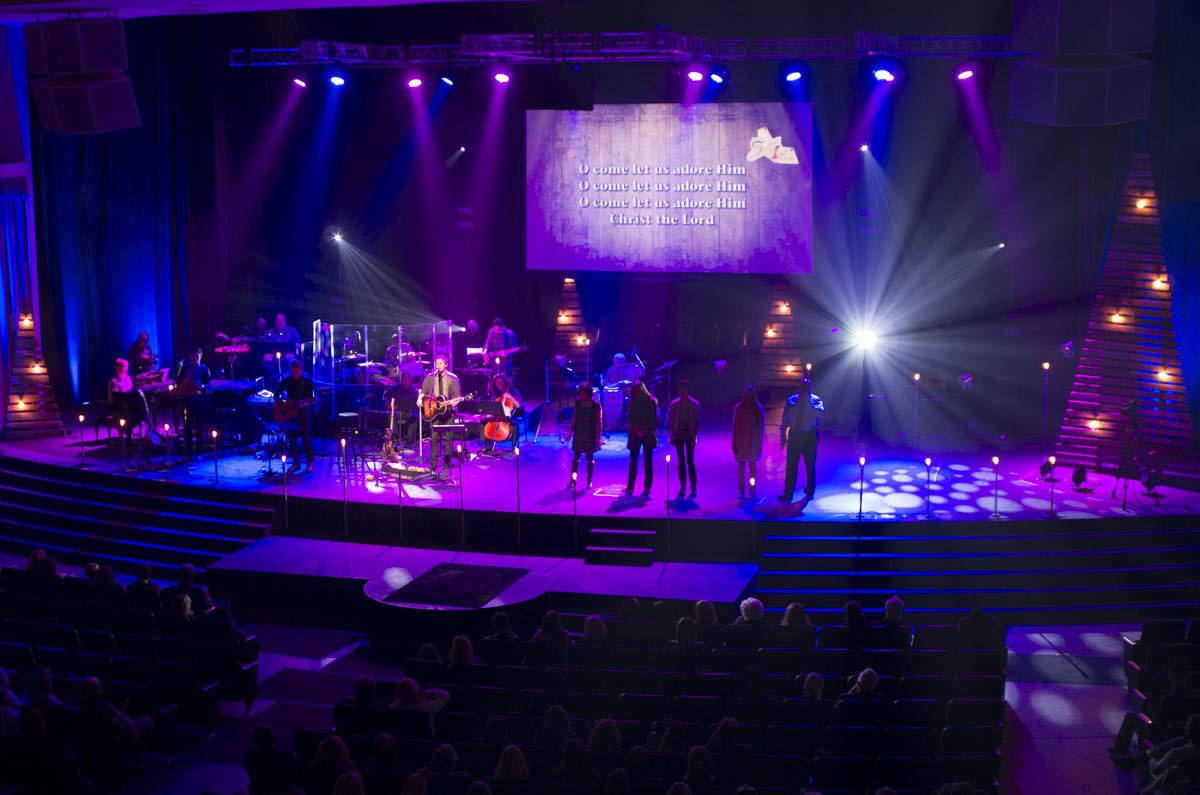 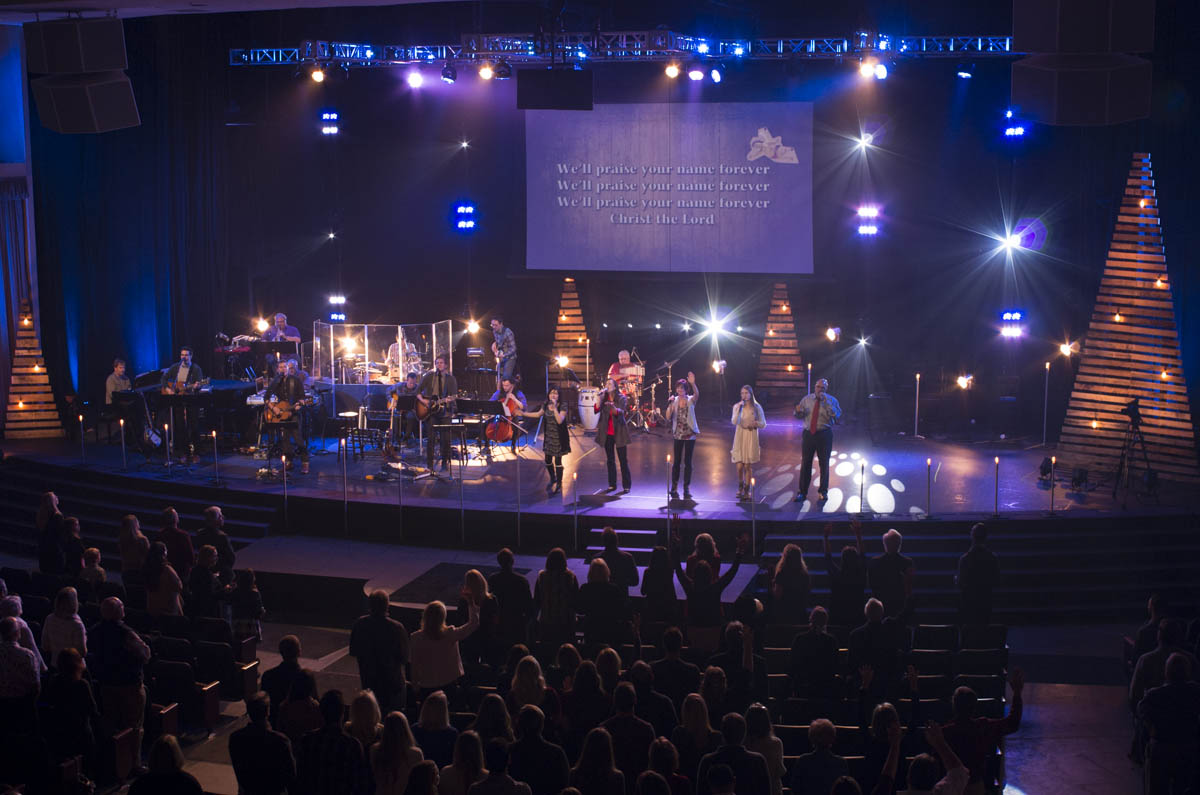 The Ghosts of Christmas Past

The look for that year was designed to be warm and inviting, simple and down to earth. My design principle was to put together something some kids would build if they were in a barn in the country putting on a Christmas service. We used a lot of OSB, hanging antique lights and an old piece of muslin for a screen.

Last year, we kept the hanging lights, but cleaned up the look a bit. Instead of OSB, we build luan panels and the block wall. It was still warm and inviting but a little more sophisticated.

This year, we changed it up some more. Instead of the giant, artificial Christmas tree we’ve used in the past, we build a 16’ tall one out of pallets (and a few smaller ones). Instead of hanging the bulbs, we made the CMA lights. And we repurposed some old PAR cans from a student room and created our version of the Dewey.

In past years, we’ve never been able to do much with lights, because, well, we just didn’t have that much to work with. This year, as part of our end of life equipment replacement fund, we picked up a dozen Elation Impression 90s, and another eighteen FlatPars. This gave us an incredible amount of color to work with. The past two years have been a lot more about the sets, this year, it was a lot more about the lighting.

Our older Studio Colors are now in the house and give us options there, while we kept the Martin 518 RoboScans as a cool beam light upstage.

Due to a rare accounting glitch, we found ourselves with no budget for Christmas this year. I had planned on renting six VL2500s and three snow machines from our usual supplier, but when the price came back, we couldn’t do it. Even after they lowered it, it was still out of reach. Then I talked with a new CTA sponsor and local rental house, Pacific Coast Entertainment. They put together a package of six Elation Platinum Spot 5r Pros and three Antari snow machines at a price low enough for me to move some money around in my operating budget. So we were able to make it snow again for Christmas.

The Platinum Spots, while not nearly as bright as the VLs, were certainly good enough, and the Antari snow machines were actually much better than the ones we’ve been renting. You can see the Platinum Spots on the upstage poles, surrounded by Color Blasts.

With all the new lighting we have to work with, the service was much brighter than in years past. We’ve completely re-hung our front light this year, and that’s driven a lot of the new look. Of course, having two dozen moving heads on stage gave us a lot to work with as well. I have to give a lot of credit to my LD, Thomas Pendergrass. He did an amazing job not only with the lighting design, but programming as well. And of course, the rest of the team pitched in and helped make the set possible.

Overall, I was very happy with the way the service looked this year. About the only thing I didn’t like is how cluttered the stage looked. We added three musicians this year, which meant more cables, more M-48s and more mic stands—not to mention keyboards, music stands and all the cabling. It just looked cluttered to me; not sure how we’ll address that in future years, but it’s something I want to look at.

So that’s a little bit about the set. Later this week, I’ll talk about mixing it, and talk about a calculated risk I took that didn’t really pay off. In the meantime, if you want to see the service, here it is on Vimeo.