A few people have asked about our remodel project at Coast Hills. It is in fact underway, and I am still involved, though to the limited extent as project manager for AVL. The initial scope of the project was much larger, but as often happens, budget constraints led to some value engineering. In my new job of three weeks, I’ve already VE’d a few projects, so this is not uncommon. 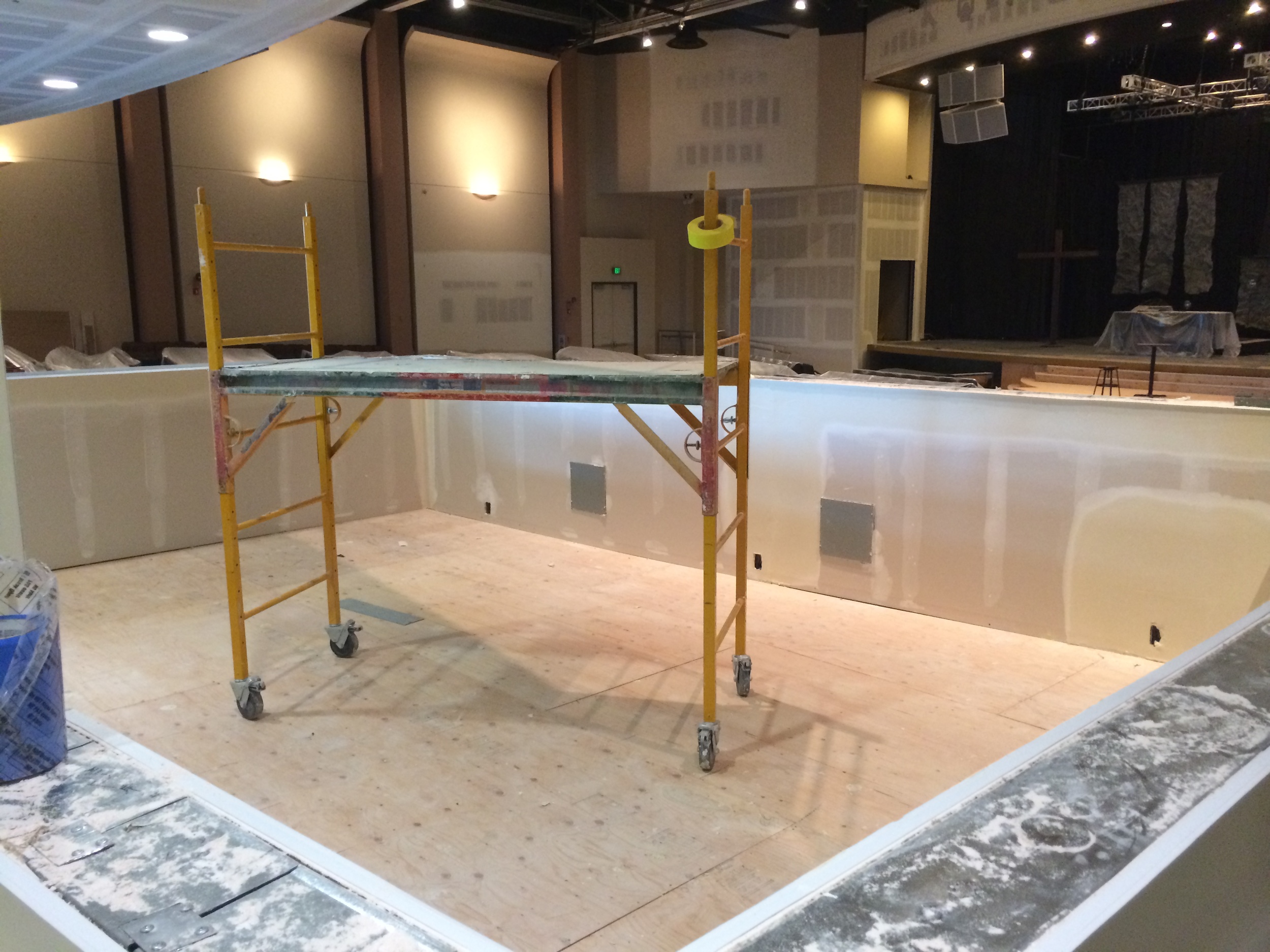 It looks really big right now, but it will soon fill up with gear. 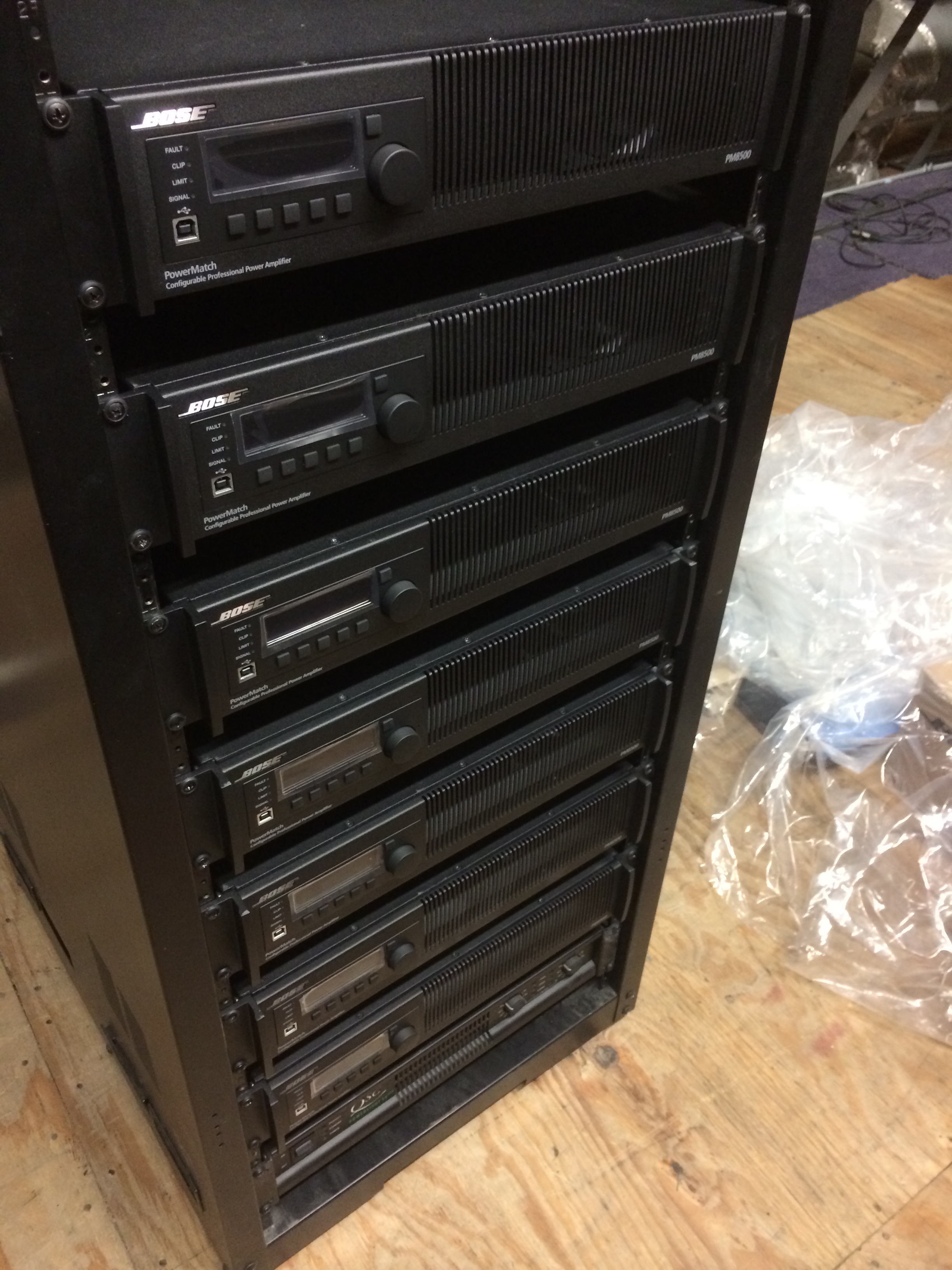 Seven new PM8500s and an old PowerLight (for stage overhead announce speakers) are ready to drive the new PA. 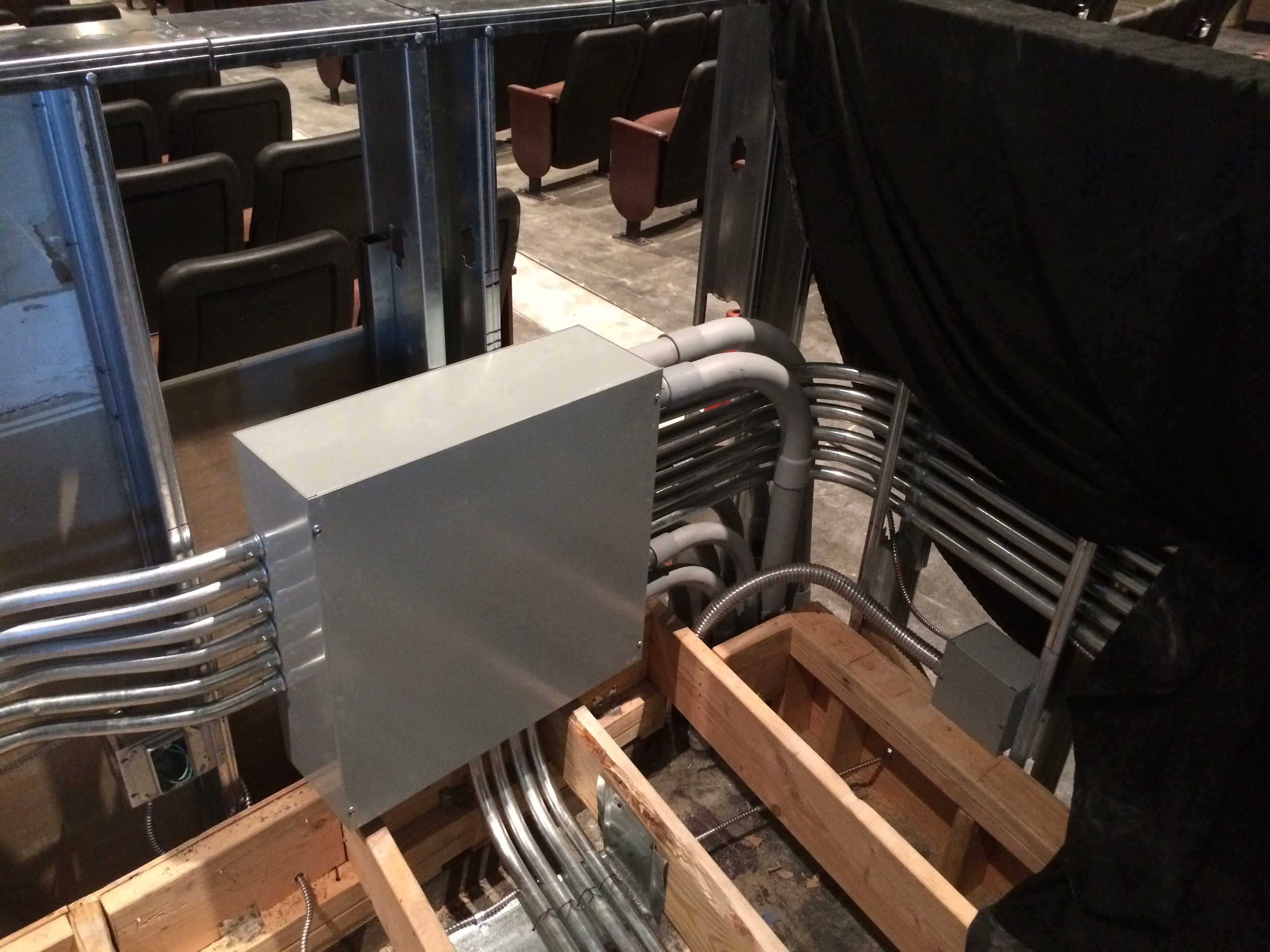 What happens when you don’t keep an eye on the trades. 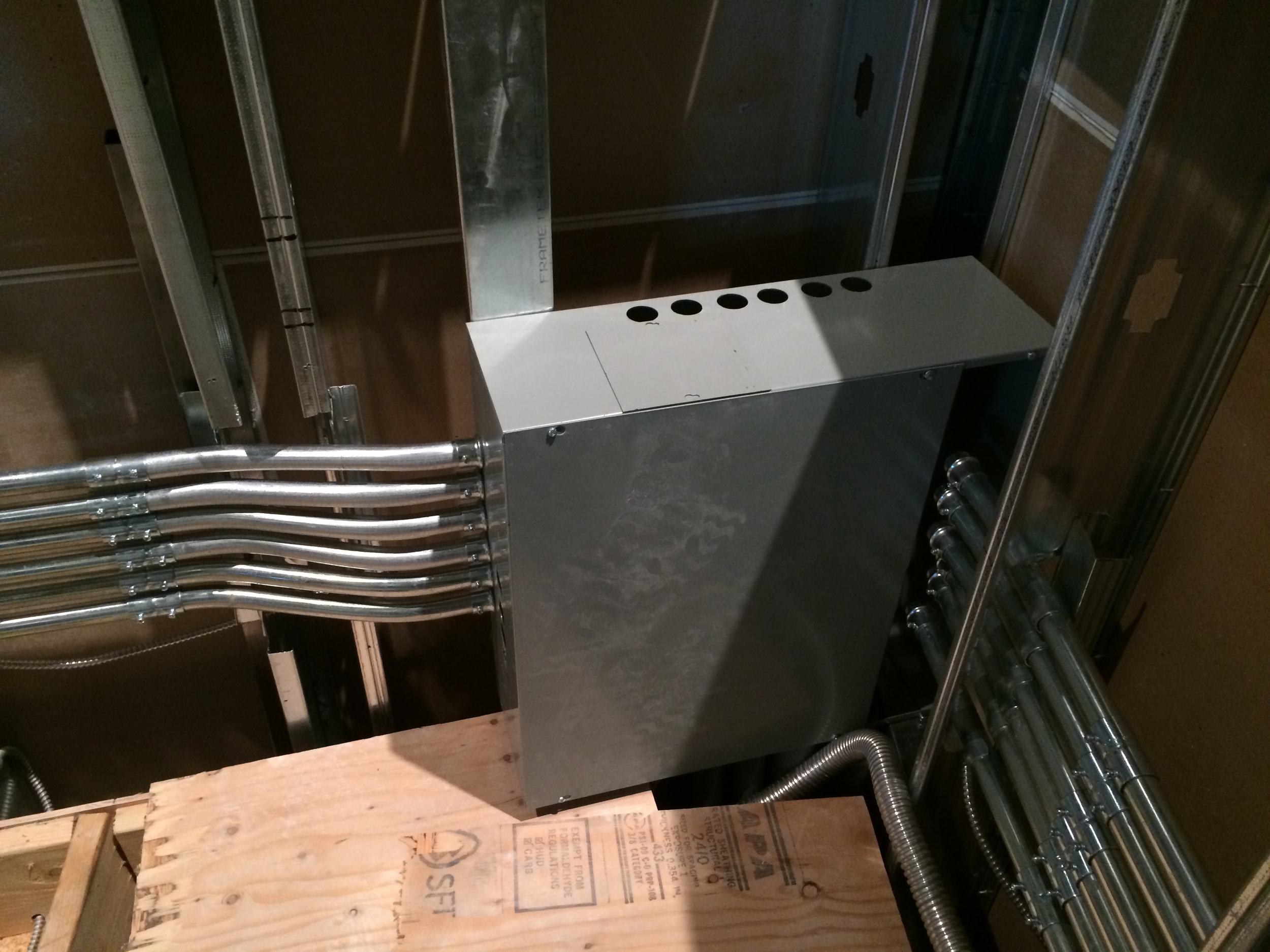 After a lot of negotiation, this is where it landed. The alternative would have been to jackhammer the floor, costing a least 2-3 days in the schedule.

From a building standpoint, we have opened up the lobby quite a bit, and the tech booth is moving to the floor. The temporary thrust we built from Steeldeck has been replaced with a permanent one built from wood. We boxed in one side of the stage that used to be curtained off storage, and the baptismal side is now open. A couple of windows in the sanctuary were covered over (I called them the “interrogation windows” as they were half-silvered and looked out from the cry rooms). The damage from the flood is being repaired, and we’re closing in the balcony with high walls that go up to the roof deck. The existing tech booth will remain open to the sanctuary, and will house video control.

In the kid’s wing (the one we renovated two years ago), we’re opening up a wall to create an even larger, large group room—tearing out all the AVL we put in there, as well as my super-cool tech booth in the process. The new room will be 60’ wide and 18’ deep with the stage on the long wall. I’m not crazy about that from a tech standpoint, but the kids min people really wanted it that way. So there you go.

Because the tech booth is moving to the floor, we trenched the floor and installed all new conduits to the stage. There were never any conduits from the booth to the stage, so this is a welcome addition. Sadly, the electricians landed the conduit in the wrong spot, so we have a giant pull box inside the tech booth instead of inside the tech booth wall. It’s a good reminder of why you need to keep a close eye on the trades at all times. They partially relocated it to a slightly better location, but it won’t be as nice as it could have been.

We will be installing a new Bose RoomMatch PA in June. I decided to go with two 6-box hangs in a left-right configuration. It won’t be true stereo, but it will be more immersive than mono. We’re also hanging four dual-18” subs in the air in a cardioid configuration. The models look really good, and I can’t wait to hear what it sounds like. One thing that is unique about our system is that we’re using both symmetrical and asymmetrical boxes in our arrays. This gives us the coverage we need, while keeping the wash on the walls to a minimum. Bose is pretty unusual in being able to do that, which was another selling point for me.

We’re also going to be replacing our nearly 10-year old Christie Roadster S+16 with a new Absen 6.2 mm video wall. The backstage wall is moving downstage by about 12’, and we had no place to front project any longer. We didn’t have the room to RP either, and when we considered the cost and inconvenience of tearing into the back wall of the stage to build a projection room, we chose the video wall. We’ll gain a lot of brightness and have new technology. The original building had a heavy track system above the stage for a moveable upstage wall. The wall is long since gone, but we’re going to hang the video wall from it, which will allow us to move it upstage should we desire.

In the lobby, we’re hanging a total of 10 TVs, six 52” and four 42”. The 42” models will hang from the second story breezeway and act as digital signage. The remainder will be program from the main switcher. I’m also adding video runs to ancillary room so we can use them for overflow. A 40-square Blackmagic router will handle all the switching.

I had hoped to be pulling cable by now, but the electricians fell behind this week. Instead, we built amp racks, demoed out equipment in the kids room and tried to get organized. Hopefully next week, we can actually pull some cable. Of course, when the PA starts to go in on June 9, it’s go time. We have to have at least audio relocated by then. We’re also re-hanging our truss the following week, so there will be more work to do lighting-wise.

It’s a big project, and as I’ve said repeatedly, if you want a project like this done right, you have to watch the trades all the time. Trades will take the most efficient route to getting a job done, which may or may not be what you want. In the end, this will be a good project, and the technological upgrade to the room will be huge. By pointing speakers at people instead of walls and boosting the brightness of the screen by a factor of 4-5, it will be a much better experience for all. The fact that the FOH guy will be in the same acoustic space as the congregation is an added bonus.

Stay tuned for more updates as we get deeper into it.

Today’s post is brought to you by DiGiCo. DiGiCo audio mixing consoles deliver solutions that provide extreme flexibility, are easy to use and have an expandable infrastructure, while still providing the best possible audio quality. Visit their website to learn more.