It’s always fun to check out new gear. Back at InfoComm, we saw the new Bose F1 speaker. Saw being the operative word. Whenever I see a company introduce another pole-mounted speaker in the sub $1,500 price range, I assume it’s no big deal, at least until I hear it. The F1 has some unique features that made me pause, however.

Now, if you’ve followed any of my adventures with the RoomMatch system, you’ll know one of the things I really like about that system is the ability to precisely tailor the coverage pattern to the room by choosing the right modules. Bose took that concept and instead of applying it horizontally, did so vertically. The result is the F1.

The HF section of the F1 is made up of 8 drivers in three sections. The drivers are similar to the HF drivers in the RoomMatch system. What’s different here is that the top and bottom sections of the cabinet can be folded up or down to create different vertical coverage patterns. Perhaps it’s best to explain what I mean with illustrations that I stole from the Bose website. 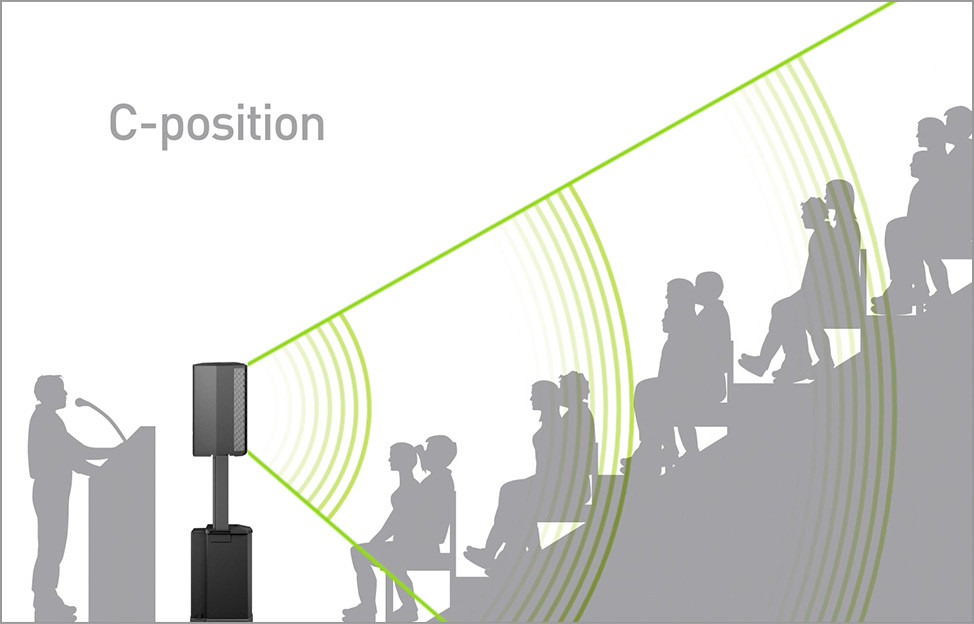 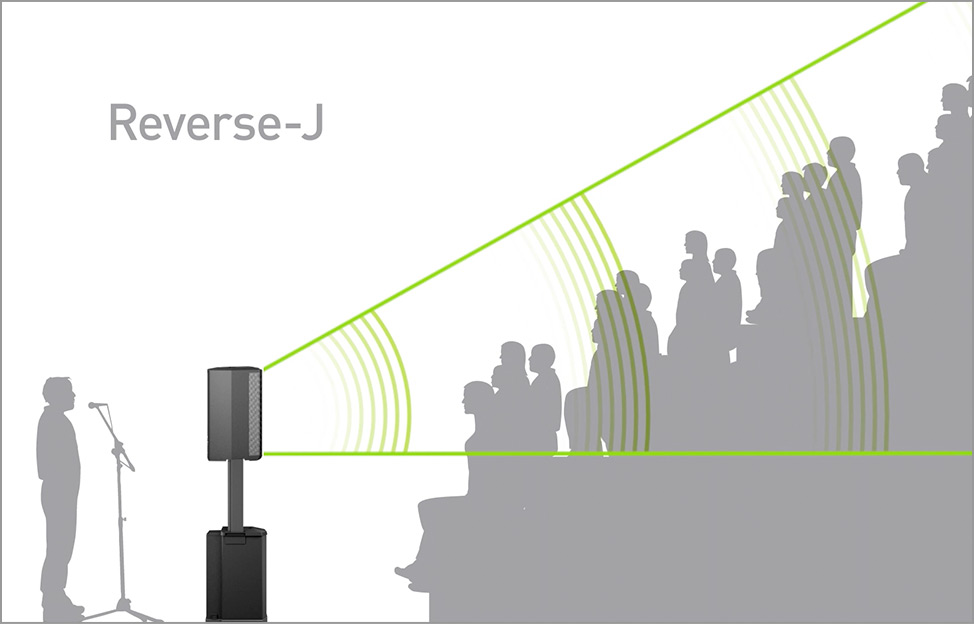 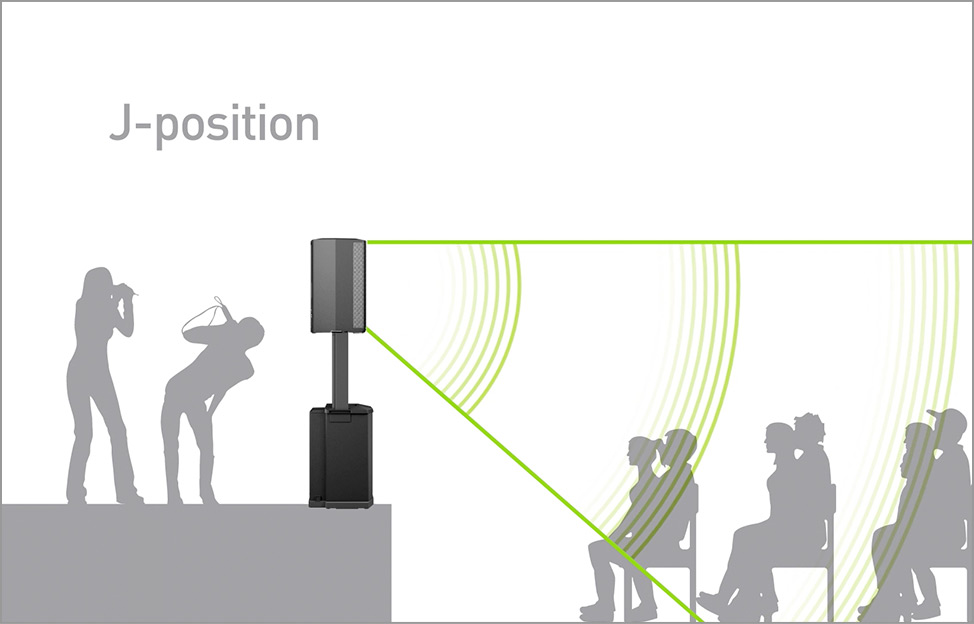 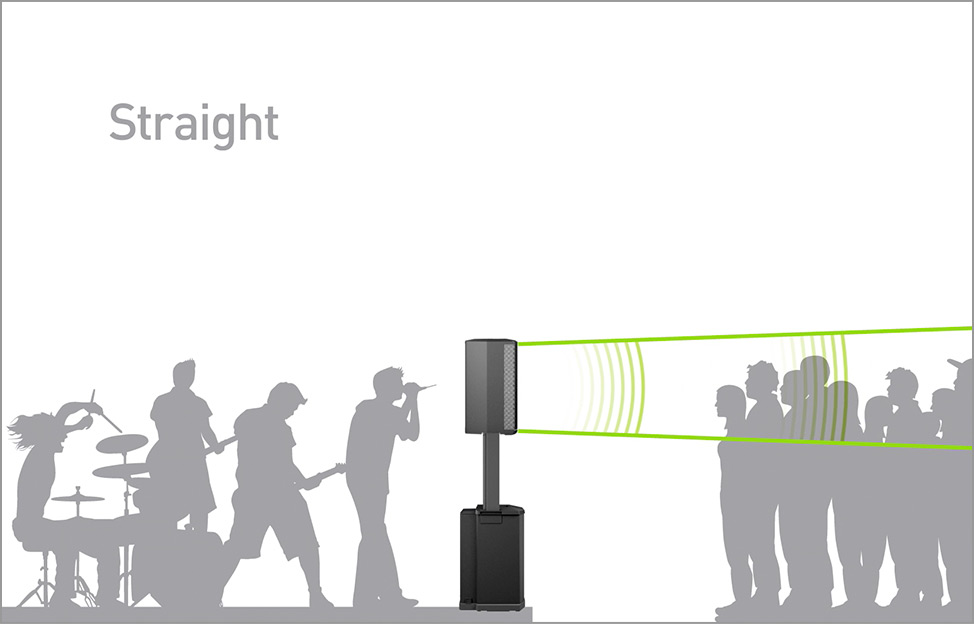 More than just changing physical position, there is some magic sauce happening in the box that changes the EQ to suit each coverage pattern. Like the RoomMatch, the pattern was pretty well defined. During the demo, we all crouched down about 20’ out from the speaker while it was in straight mode. We were clearly out of the pattern. Then Tony clicked the lower section down and suddenly, we were in the pattern.

While vertical is variable, horizontal is a fixed 100°.

Another thing I like about the RoomMatch is how low the crossover is (500 Hz). It is well out of the vocal clarity range, which really keeps the weird phase stuff that afflicts most cabinets from happening on vocals. The F1 crosses over at 600 Hz, and the vocals sounded great.

It was actually interesting listening to the demo, because they used the same music I’ve heard on RoomMatch demos on multiple occasions. The overall sound signature was similar enough that I told Bose I would do the same thing to this that I would do with RoomMatch (cut a bit in the 2-3 KHz range). Other wise, it sounded pretty solid.

The F1 system also includes a sub which is very clever. Instead of a pole that fits into a socket (and gets dented, bent or lost), there are two sliding arms that come up out of the sub to fly the main box. It even includes cable channels to hide the wires. The sub sounded good, though for a dual 10”, you’re probably not going to do too many EDM parties with it. Still, it was no slouch and unless big bass is a huge need, you’ll be fine. The sub is powered by a Class-D 1000 W amp, as are the full-range boxes (I think; that part is not 100% certain).

As always, the test is in the listening. I think all of us came away from the demo feeling this is is a really good-sounding speaker system. Certainly, there are a bunch of speakers in this price range that sound good, are portable and affordable. None do the clever vertical aiming thing, however, and that might be the thing that tips the scales. I really do like the package for portable situations, the way the boxes sit on the subs is cool, easy and fast. And the full-range boxes do have fly points on them for permanent installs.

List on each component is $1,199, which is in the ballpark for similar products. Though you’ll likely be able to find it for less if you ask your favorite seller nicely.