When I started shooting video (just after the beginning of time), most cameras had at least a 1/2″ or 2/3″ image sensor. They also weighed 18-25 lbs. The advent of the modern mini-DV and HDV cameras has lead to a drastic reduction in size and weight. It also has lead to smaller and more densely populated image sensors. Most of the cameras we are using in our churches have 1/3″ or even 1/4″ sensors. While I don’t miss the weight of the older cameras, there is one thing I dearly miss—depth of field, or more correctly, the ability to selectively focus on the subject of an interview while throwing the background out of focus. This is easy with a 1/2″-2/3″ chip, but with the smaller sensors, it’s really tough. To get a nice de-focused background, you need to zoom way in, open the aperture all the way and have a lot of distance behind your subject. This is rarely possible, and often leads to results like this: 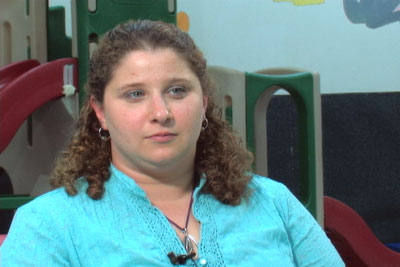 Notice the lack of separation between the subject and the background. This interview was taped in a room that was completely lit with overhead fluorescent lights. The result is a very flat image. However, thanks to some trickery, we can end up with a really nice interview. The following process was completed in After Effects, but could also be done (albeit not quite as easily) in Final Cut or Premier.

What we’re going to do is take advantage of the ability to use masks (and at least in After Effects, masks that we can key frame and animate if we need to). Take the clip on the timeline and duplicate it, stacking one directly on top of the other. On the top clip. you will use the pen tool to create a mask that follows closely the outline of the person. This only represents one point in time, so if the subject moves a lot, you’ll need to add keyframes and animate the mask. The next step is to add some feathering to the mask. For this shot, I used 10 pixels. If you use too much, it will look strange; don’t use enough and you’ll end up with a clearly defined line. If you turn off the bottom track (what will end up as the background), you should have something like this: 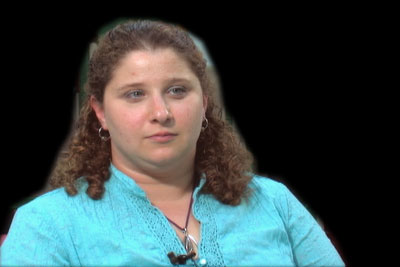 What we want to do is isolate the subject from the background. You can see a bit of the background around the top of her head, something I tweaked as I went on. Next, turn your background layer back on, and apply some blurring. For this shot, I used the lens blur effect, which looks nicer than a straight Gaussian Blur. But use what you’ve got. I also applied a Hue/Sat control to de-saturate the color and bring the background level down. It ends up looking like this: 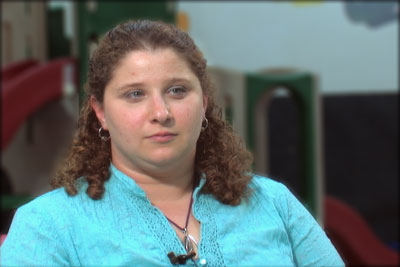 Now you can see we have a nice degree of separation between the background and the subject. Depending on how much she moves, I may have to track the mask to make sure she doesn’t tilt her head and suddenly get blurry. This takes a little time, but the results are worth it.

For more fun, if the background is static, you can pull a still from the interview, take it into Photoshop and play around with the Lighting effects filter. You may try something like this: 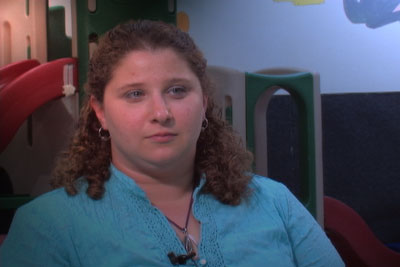 Clearly, the subject looks a bit strange, but that’s OK because we’re going to cover her up with video. Note that this only works well with a subject that doesn’t move much. We’ll do the same thing we did before, placing the masked subject video on a track above the colorized background clip. Again, we’ll put the lens blur effect on (I did it in After Effects, but you could also do it in Photoshop). The final result looks like this: 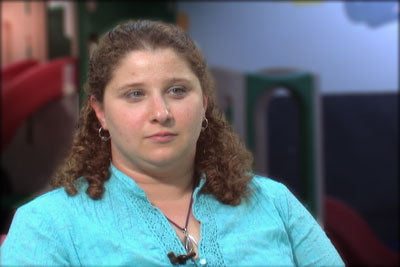 Now the subject is really separated from the background. You have to play with it to see how much de-focusing works before it looks fake. You also have to be careful about subject movement. But for a typical talking head interview, this is a great way to achieve the look we’re after without having a huge room to shoot in.