The other day while recording the FaithTools podcast, we got talking about set design. I didn’t have a lot to say because at Upper Room we don’t do sets per-se. Upper Room meets at Christ Presbyterian Church, which hosts two contemporary and one traditional service each weekend. After the 11 AM contemporary finishes up, we invade the room and turn it into Upper Room. At the end of the night, we put it back the way we found it. And you should know the way we find it is a very traditional, old-school Presbyterian church sanctuary. Our services could be described as emergent and as you can imagine, that presents challenges.

We do the best we can however, and each week transform the space into one that works fairly well. Over the last few weeks, we’ve been in a series called Generations. It’s given us the opportunity to do some really fun and creative things, as the photos below show.

For Mother’s Day weekend, we went a little crazy and brought in three photo booths—the kind you would find at the mall or a fair (provided by The Traveling Photo Booth—thanks, Jeff!). They printed out a strip of 3 pictures, which we used as part of our experiential. That weekend the theme was What I Learned from My Parents. We had cards printed up that people could use to write notes of encouragement to their moms. They then attached the photo strip to the card. As you can see, the response was pretty great. [Note: click on any of the photos for a larger version.] 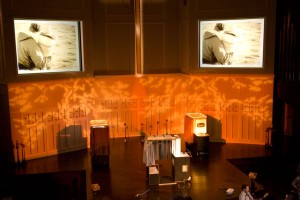 Though we don’t have much for lighting, the simple use of a gobo overlaid with a solid color creates a good-looking background. 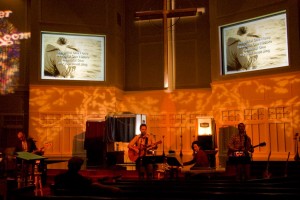 The band at sound check. 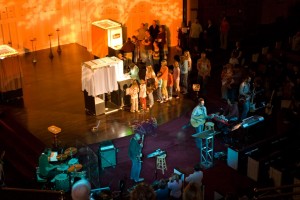 We had several hundred people come up and have their picture taken in the three booths while the band played a few worship tunes. 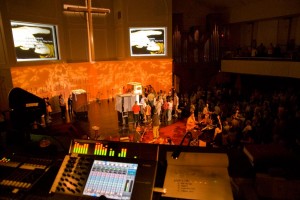 The view from FOH, which is located in the balcony, house center-left. If you look closely, you can see the massive pipe organ that belies the room’s very traditional feel.

The next weekend, we did something really out of the ordinary and performed a song from the musical Avenue Q. This was a bit challenging as the original musical was performed by Muppets. Never being ones to let details like that stop us, we substituted humans and put together some video footage that was projected on the main screens and a false back wall. The back wall was covered up with blank signs of colored poster board, which was used later in the evening to set up the message. The photos don’t really do the video projection justice—it looked a lot better live. The band and vocalists just knocked this one out of the park, and it turned out to be a great setup for the message, What I Learned as a Twentysomething. 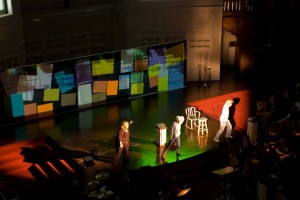 You really need to see the larger version of this to get an idea of the video projected on the wall. The wall, by the way, is just 3/8″ plywood on a frame of 2x4s and covered with black foam insulation and black construction paper. It’s propped up in the back with diagonal braces made from engineered floor trusses. 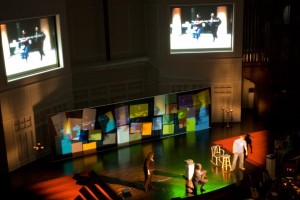 We originally wanted the main screens black but because of the way our video distribution is wired, it would have meant a lot of hoops (I hope to rectify this eventually), so we left them on. In the end, we decided we liked it. 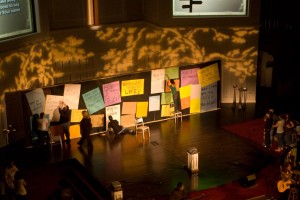 After the song, we invited people to come up and share a question they asked are are asking in their 20’s. An artist then wrote the question on one of the poster boards. After about 5 minutes, we had a wall full of questions. 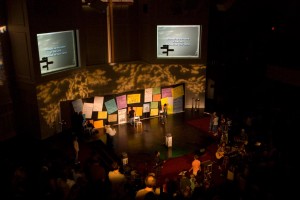 Having only 15 conventional fixtures to light everything we need to is a challenge (we’ll be adding 5 more this week). As you can see, the color wash from the previous week is gone, but the tree gobo remains. That gave us some continuity, and we still were able to light the actors. Like a lot of things, more fixtures are better when it comes to lighting. Sadly, we’re running out of dimming channels, fixtures, space and cash.

So there you go. That gives you an idea of what we do on an “average” week. Actually, these two weekends were a bit bigger than usual. But it also shows what you can do if you don’t have the time, budget or facility to create the really cools sets that other churches do (for example, check out South Hills Church in Corona, CA; Van Metchke does a great job with sets out there).