This week at Upper Room we kicked off a series called “I HATE That.” Which made for some fun inter-office e-mailing as we planned for it; Subject: I HATE That Rationale; Reply: Upon further reflection, I hate that rationale too… But I digress.

This week, the theme was Difficult Conversations. As we explored how to move the community beyond intellectual agreement that they may, in fact, need have some difficult conversations with people, someone came up with the idea of putting a giant calendar on stage. The “dates” would be stacks of paper with the number on one side and a suggested action plan for having that conversation on the other. The idea was to come forward, pick a date and write the person’s name on the calendar, and sometime between now and that date, they will have that conversation.

Quite a few people came forward. I was moved when I watched one young man come forward and stand at the front edge of the stage, looking intently at the calendar. After a few moments, he chose a date, wrote down a name and took his sheet.

Because I was running presentation last night, I was unable to get down and take pictures as it was happening. But here are a few that I shot just after the gathering ended. Hopefully, you can get an idea of the scale of the calendar. It was huge, and quite heavy. It was made from butcher’s paper and black duct tape. We did tape it down to the stage with painter’s tape loops in multiple places (when I say we, I mean my boss and UR Creative Director, Craig). Thankfully (and perhaps surprisingly…), no one slipped on it, and the paper didn’t tear at all. 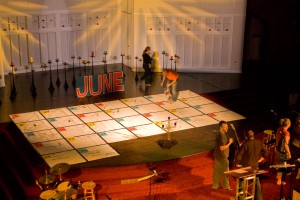 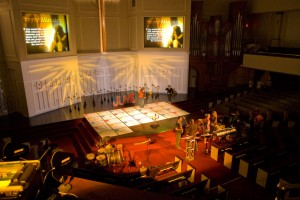