There are a ton of different strategies for backing up your data. What you do depends largely on what you are trying to accomplish, and what your tolerance for risk is. Remember, your hard drive will die one day, and you’ll be stranded unless you have a backup.

Originally, I was going to try to come up with an exhaustive set of guidelines for backup. But as I’ve researched more and more, I’ve decided that is just about impossible. So instead, I will lay out a number of strategies that I am in the process of implementing, along with the rationale for them. At the end of the article, I’ll give you some links to go for more information. It should be noted that all of the computers I’m working on backing up are Macs. The software mentioned is Mac-based, but the principles still apply. I’m not a Windows guy, so I don’t have much experience with Windows backup software. I’ll give you some links at the end, and maybe Daniel will chime in on with a comment with his experience (Daniel is the Windows Yin to my Mac Yang)

I’ve been meaning to get my MBP backed up for a while now, but the point was driven home a few weeks ago. I was rushing through airport security theater at O’Hare, trying to fit all my earthly possessions into 3 gray trays. The line was moving fast, and I pushed the trays around the corner and the one containing my Mac (now outside of my backpack for “security” reasons) crashed to the ground. Thankfully, it emerged unscathed. But the point was taken; I have a big chunk of my life on there and recreating it from scratch would be darn near impossible.

What I’ve done for the MacBook Pro is to pick up a 500 Gig quad interface drive from OtherWorld Computing. I partitioned it off into a 150 Gig and about a 350 Gig (it’s less due to formatting losses). The 150 is a full, bootable backup made by Carbon Copy Cloner. The 350 Gig is a Time Machine target for incremental backups. 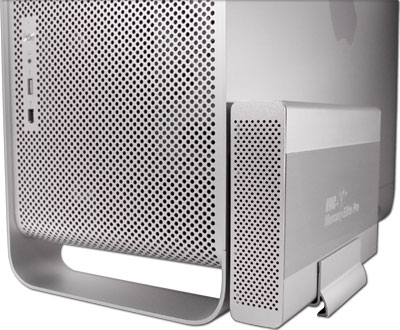 It could be argued that this is redundant, because Time Machine backups are also full backups (unless you tell them not to be) and you can restore your entire drive from them if need be. However, doing that requires getting a new drive (or a new computer if that’s the case), booting from the OS DVD, and copying all the files to the new drive. That takes a good hour or two (I’m backing up 87 Gigs right now).

With a full, bootable backup, I can plug that drive into any computer that will run OS 10.5 and go back to work. No time wasted. This would be sufficient really, but because I have Time Machine, I use it. Time Machine is a defense against a file getting accidentally erased or corrupted. Since it runs every hour, it’s essentially on-line backup. I have Carbon Copy Cloner set to run an incremental backup (replacing only what’s changed) every Tuesday morning at 10:30 when I head into my creative meeting. 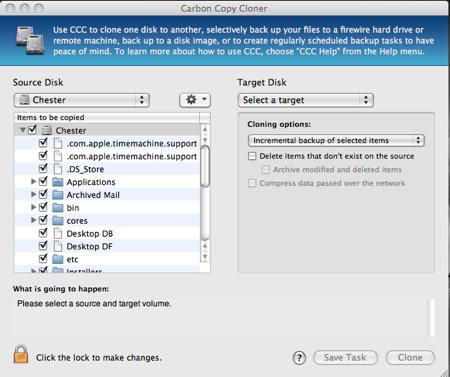 Doing it this way also gives me 2 copies of my files, albeit on a single disk. Still, it’s a good way to keep moving should my laptop get stolen, or crash off of another shelf.

I’m also using this exact strategy for our ProPresenter iMac. My theory is that if the iMac goes down on Sunday, I can plug the drive into my MacBook Pro, boot from it, and in just a few minutes be back up and running. Time Machine will give me the latest files, and CCC will give me a recent bootable partition.

My boss, Craig, uses a PowerBook G4 running Tiger. Our pastor, Kurt, uses a MacBook, also on Tiger. Time Machine would have worked great for them, but decided it wasn’t worth the disruption to upgrade to Leopard. So I bought external drives from OWC and we will use SuperDuper! to create full bootable backups of their drives. I’m going with SuperDuper! for them because the scheduling and incremental copy options are a little more flexible. SuperDuper! can do a smart incremental backup (which will update files that have changed since the last backup) or a smart copy, which copies new files, leaving the old versions in tact. This is the option I’ll use.

I will work with them to find times when they are likely to have their laptops in the office and able to connect to the hard drive for a bit. We’ll schedule backup events to occur then, but if they aren’t in, the backups will run the next time they mount the drive.

These backups will also be fully bootable, so if their laptops fail, they can plug into another machine and go back to work while their computer is repaired. I’m a big fan of bootable backups for this reason.

This is my third solution. And it’s a bit of a tricky one due to the amount of data involved. As I routinely have a few hundred gigs of video, graphics, audio and other assorted goodies on my RAID capture drives, I needed a large solution for that. I also have 120+ gigs of OS and Applications on my boot drive. Now it’s true that if I lost that drive, I could re-install. But that would be a day-long project at least, especially since every app has been updated several times, and I’d loose all my preferences. 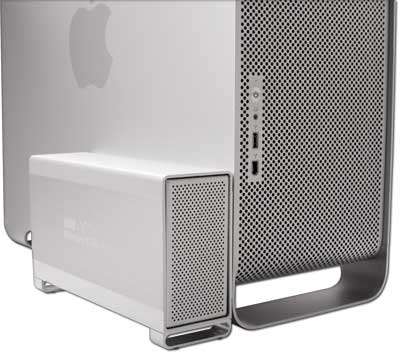 Once again, I turned to OWC, and bought a dual drive case. This case can be configured as a RAID 0 for speed; spanned (2 identical–or not–drives as one large volume, though I would never do this) or set up as a JBOD, Just a Bunch of Discs (in this case, 2). I filled one slot with a 750 gig, and the other with a 500 and set it up as JBOD. Each drive appears as a separate volume, yet only takes one FW 800 port. Very tidy!

The 750 will be a Time Machine target for my video drive, a 500 gig RAID 0. The 500 will be used for a bootable backup of the boot drive. I’ll probably use Carbon Copy Cloner, though the jury’s still out (I may go SuperDuper!). Either way, and you’re probably tired of hearing this by now, if the Mac crashes, I can take the bootable clone, plug in to another Mac and get back to work. If I loose my boot drive, I can drop in a new one in a few minutes, and restore from the backup and the Mac will never know what happened. The copy will take a few hours, but it will be right back the way I left it.

As you may have guessed, I’m a big fan of the bootable backup. I figure if I’m going to go to the trouble to backup, I may as well back up everything in such a way that the backup actually saves me time should I need it.

In all cases, it’s important to be able to set up a schedule for your backups. Trying to remember to do it won’t work. Both SuperDuper! and CCC can be set up to back up as often as you like, and Time Machine defaults to every hour. If you’re not near your backup drive when the schedule kicks in, the software will start backing up when you reconnect. It’s important to get in the habit of plugging in your backup drive, especially if you’re running a laptop.

Now for you Windows users out there, most of the strategies and hardware would work just fine for you. The big difference is in software. In my research, I’ve seen Norton Ghost mentioned a lot, along with Acronis. Both seem to have similar functionality to SuperDuper! and will provide the ability to create backups you can boot from. Lifehacker has a good post (with even better comments) about backing up, and I found another site (aptly named, Backup Software Reviews) that reviewed 18 software programs for Windows. That should keep you busy for a while.

Though their URL is www.macsales.com, OtherWorld Computing is a great hard drive and memory resource for Macs and PCs alike. I’ve been buying from them for years and have never had a bad experience. Of course, you can find great deals at NewEgg (also a favorite vendor) and your local big box store. Drives are getting cheaper every day (the 500 gig I bought last week dropped $4 in the two days it took to go from IL to my office…), so there’s really no excuse to not back up.

As always, no company mentioned in this post pays me to say anything nice about their stuff. But it’s what I’ve been using and had good results with. Your mileage may vary.