Upper Room has had a tradition for the last seven years of taking our worship gatherings outdoors several times each summer. This year is no exception. We have the entire month of August slated for outdoor worship, though for the first time ever, the first weekend in August was moved indoors due to threatening weather. Thankfully for me, I was on vacation at the time. And the following week. This past weekend however, I was there and ready to roll.

Now, you have to know that since even before I was hired, everyone’s been telling me how great outdoor worship is from a tech standpoint, because we hire in a sound company to do the sound. So in theory, we don’t have to do anything. As it turns out, I think I worked harder this Sunday than I have since I got here. I thought I left the roadie life behind when I took this cushy church gig. Not so, apparently. I was told, “Yeah, the sound co just needs a few guys to help unload the truck…it’s a few cases and takes like, 10 minutes.” Right. And the few guys means me, our volunteer producer and her boyfriend. And the few cases was closer to 30. And to keep on schedule, I helped hang the rig and set the stage.

This all sounds like I’m complaining, and I’m really not. It was a lot of fun, the guys from the sound co (Reach Communications) Dan & Matt were super-cool and it was a lot of teamwork. And it’s been a while since I’ve gotten to get down and dirty with setting up a pretty good sized rig, so I enjoyed it.

For the sound geeks in the audience, here’s a partial breakdown of the gear on hand.

All in all, it was a pretty sweet setup. It’s really quite remarkable the difference in clarity and presence those speakers have compared to our normal sanctuary setup (which I find to be completely insufficient). The gatherings take place at a nearby bandshell that faces into a hill. It’s a good 300′ from the top of the hill to the bandshell, but the sound was clear and even all the way up. Several people commented on how much separation they could hear between instruments, as opposed to everything mushing together in our room. Personally, I found it quite refreshing. I just wish I could have mixed it.

Here are some pictures I took to give you an idea of the venue. (click on any to enlarge) 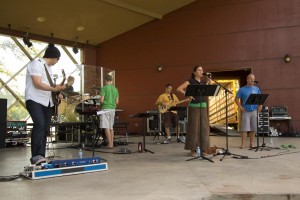 The band practicingAs you can see, the bandshell is quite good-sized. Our fairly small band had plenty of room to spread out. I think next week, we need dancers or something to take up some space. 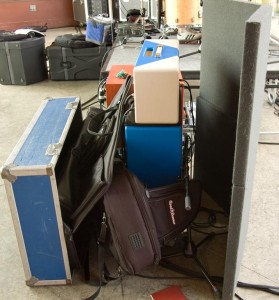 Ghetto Iso Cabinet for the Guitar AmpWhen you don’t have a real isolation cabinet for the guitar amps, you make do with what you have. In this case, we used the absorption material from our drum shield in front, and packed in a bunch of other soft stuff in the back. For as ghetto as it looks, it worked great; sound levels on stage were very manageable. 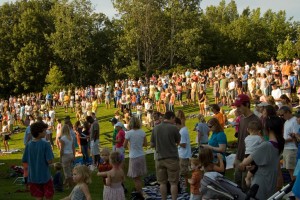 The crowd gathered and filled in nicelyWe had a good-sized crowd on hand, I would say 600-700 easily. It was a beautiful night, albeit a little warm. But we had a good breeze, and as the evening went on, shade covered more of the hill. We also have a BBQ prior to the gathering, so many came for the burgers and hots beforehand. Not to mention the giant inflatable toys for the kids. 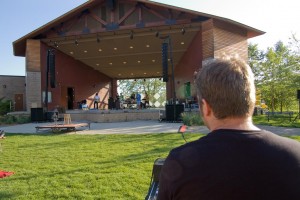 Dan mixes from the FOH positionDan, from Reach Communications, was on top a very solid mix all night. On the apron in front of the stage, you can see the platform from which our missional director gave the evening’s talk. The biggest challenge of the night was dropping the speakers on stage left. The Genie lift was binding up and Dan had to climb on top of it to get the sections to drop correctly. That was fun. Note to self–always remember gloves.

If the weather cooperates for the next two Sundays, we’ll be back at the same spot and do it all again. I think the best part for me was to be able to hang out with the band after rehearsal. Normally, I’m tied up overseeing lighting, presentation and sound, so in this case, it was nice to just chill with everyone for a while. I’ve been brainstorming with a few of the band members about doing a podcast for this very blog; hopefully that’s something you’ll see coming up this fall.

Once September hits, we’re back indoors. We’ll be starting a new series and we will have a really exiting announcement that we’ll be inviting the community into being a part of. Can’t talk about it just yet, but keep watching. God’s doing very cool things with Upper Room, and it’s a joy to be a part of it!