There’s a Problem in the Matrix

With apologies to Neo…

I remember it like it was yesterday. It was one of the more momentous days of my life, in fact. Two milestones, occurring on the same day. I graduated from an MI (Music & Instrument Store) board–a Mackie SR-24–and I was getting paid to mix at church. The new board was a beauty. To this day it’s one of my favorites; the Yamaha PM3500-56. It was a beast of a board, one I’m glad I never had to move. It was the kind of board where congregants would linger on the way in, peer over the edge of the sound booth and say, snickering, “That’s a lot of knobs. Do you know what they all do?” My reply was always the same, “Well, yeah…” with just the right amount of “what do I look like, an idiot?” facial expression. And in fact, I did. But it wasn’t always thus.

My first day on the job was interesting. Not only was I getting used to being paid to be a sound guy, I was learning a new board. The great thing about sound boards is that once you learn one, you more or less know them all. The more part is easy. It’s the less part that can be tricky. All boards have gain (or trim or head amp) controls, aux sends, pan and faders. Many boards have groups and matrixes. Some have VCAs. I was familiar with groups, and I quickly grasped VCAs, but the matrix had me confused for a while. As the outgoing sound guy was explaining the setup to me, I remember when he got to the matrix. In that setup, we used matrix 1 to feed the main speakers, and matrix 2 to feed the downfills. OK, I’ve got that, but my question was, “How does the sound get there?” He looked at me as if I was from Mars and said, “These knobs!” That really didn’t help.

So I did what any self-respecting sound guy would do. I went home, downloaded the manual and studied the schematics until I figured it out. What’s that? You don’t enjoy reading schematics? Well, that’s OK, because today we’re going to clear up the mystery that seems to surround The Matrix.

First, know that there is a difference in the way a matrix behaves on an analog desk versus a digital desk. We’ll deal with analog today, and digital tomorrow (or the next day…). But before we get to understanding how a matrix works, we need to learn more about the thing that drives our sound boards, the bus.

Much like urban transportation, a bus in sound parlance is a place where we can stick audio signals and send them someplace. If you are in downtown Minneapolis, and want to get to say, Fort Snelling, you could take the 52 bus. (I’m making this up, I’ve never actually taken the bus in Minneapolis). But you know how it works; wait at the bus stop at the right time, get on the bus when it arrives and get off at your destination.

Once we put that signal on a bus, it heads off to it’s destination. That could means an output jack on the back of the board. More often, we have the signal do the equivalent of a mass-transit transfer. For example, we’ll often send all of our drum mics to a group 1 bus, but instead of sending that mixed signal (of the drums) out the dedicated group 1 output on the back of the board, we’ll send it instead to the L&R bus where it gets mixed in with everything else.

We do this so we can easily raise and lower the level of the entire drum kit with one fader, while still keeping the relative mix of each drum mic in tact. So all the drum signals get on the group bus, then are transferred to the main bus for output. Just picture passengers coming from all over the city and ending up at the same place and you’ll get the idea.

Now that we have that clear (it is clear, right?), it’s time to answer the question, “So how does the sound get to the matrix?” Let’s take a look at the matrix sections of a few popular analog boards, and we’ll see what they have in common.

This is the matrix section of a Soundcraft MH2. This desk has what is known as an 11×4 matrix. That is, there are 11 inputs and 4 outputs. Let’s keep looking. 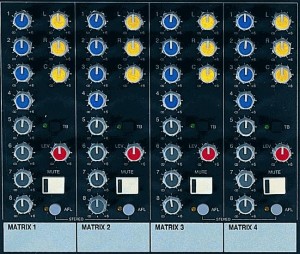 This is an Allen & Heath ML4000 (which is a pretty sweet board if you ever get the chance to mix on one). This goes the Soundcraft 1 better and is a 12×4 matrix (it adds an additional “aux” input that you can mix into your matrices. click the picture to enlarge 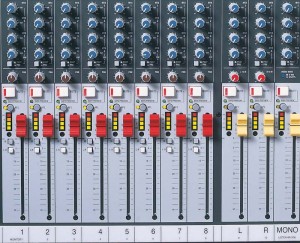 Here is an A&H GL4800. I’m ending with this one because it is the most unconventional, yet makes the most sense. click on the picture to enlarge

I chose each of these boards for a specific purpose. The Soundcraft gives us a great clue about what goes to the matrix by thoughtfully labeling the controls G1, G2, etc., as well as L, C & R. Any takers as to what that might stand for? You in the back…That’s right! Groups! As I’m sure you all know, the MH2 is an 8 group, LCR board. Do the math and you come up with 11 mix busses (8 groups + L, C & R = 11). Look at the caption under the photo and you’ll see that the MH2 has an 11×4 matrix. Lightbulbs are going on all across the country now.

The A&H ML4000 follows the same convention, only they add the additional input for good measure. Both the MH2 and the ML4000 follow the industry standard convention of lining the matrix up like, well, a matrix. All the controls are kept together, and they are read top to bottom, left to right. Columns represent the individual matrix buses, while rows represent the groups (or the L, C & R buses). Turn up the G1 knob of matrix 1 and whatever is happening in group 1 gets sent to matrix 1. It’s just like an aux send, only for groups instead of channels.

Conceptually, the GL4800 illustrates this the best. The GL4800 is an 8 group, LCR board as well, but rather than cluster all the matrix knobs off in their own little world, they stacked the 4 matrix sends right above the group and master faders (just like aux sends on a channel). And this is how they work.

The matrix gives you 4 (or on larger boards 8 or even 12) more places (outputs) to send a mix of your groups. It’s like having 4 more discreet “main” outputs–only you can also send the actual main outputs to the matrixes. Each matrix mix can be different, which means you can create mix-minus feeds, lobby feeds with lower drum levels so you don’t blow up ceiling speakers, record feeds with better balance and all kinds of things.

In fact, I changed my mind. Tomorrow we’ll talk in more detail about how you can use matrix sends on an analog board. Then we’ll get to how matrixes work on digital boards, and if I’m looking for one more post for the week, what you can do with them on digital boards. This is great–a week’s worth of material on one topic! Stay tuned…