The Vision of John

We’re in a new series right now called Revelation/Revolution. The idea is to look to the first three chapters of the book of Revelation, see what the Revelation of Jesus says to those seven churches, and consider how we need to revolutionize how we live, and what we are called to be as a church. Since the vision John sees is one of Jesus walking among seven lamp stands, we of course, have seven lamp stands on stage. And since we can’t just have seven lamp stands (they’re really more lamp posts…) on stage turned on all the time, we needed to control them.

Thankfully, we have two 4-channel portable dimmers. But no one ever thought about running a DMX line from the tech booth to the stage, so using those dimmers would have meant dragging out a 150-175′ DMX line every week, then picking it up at the end of the night (we share the space, remember). For eight weeks. That though did not appeal to me, so I looked into other options. I settled on the Chauvet wireless DMX unit (which I’ll review later). The short version is that it works great. It transmits a whole DMX 512 universe on the 900 MHz band. With a transmitter above the booth and a receiver down by one of my portable dimmers on stage, I was good to go.

One thing we did that was really cool was to synchronize the lighting of the lamps with the series intro video. The video features famous people who had a revelation (Mother Teresa for example) and how that played out into a revolution (caring for the poorest of the poor). With each “revelation,” we lit a lamp with a 2 second up time. As the seven “revelations” were told, the next lamp would come on, while the previous one would fade down with a 10 second down. At the end of the video, when we introduce the themes for the next 7 weeks, each lamp came on with the theme graphic, and we built to all seven lamps lit. But we only took them to 50% initially. As the music swelled at the very end, we bumped them all the way to 100%.

All the cuing was done manually; I watched the time of the video playback and cued the light operator. It worked really well, and added another dimension to the video.

At the end of the night, we invited people to come up and take an object that represented one of the seven attributes John described of Jesus. Wool for his white hair, denoting wisdom, for example. Once people had their objects, they were invited to stand for corporate prayer to pray these attributes into Upper Room as we cast vision for our new church.

It was a very moving evening, and we got a lot of positive feedback regarding the stage set and the use of the lamps. The lamps themselves were purchased at Lowe’s. They are designed to be set into a concrete post (they even came with anchor bolts). Since we didn’t think it would be appropriate to lag bolt them to the hardwood stage (I would have heard about that for sure…), I made up some 18″ square 3/4″ MDF bases, painted them black, and bolted the lamps to those. I cut a slot in each base for the cord to come out. I used 16 gauge SJ cord with a ground for safety. This way, at the end of the series, we can sell the lamp–they will be ready to put outside just like they were designed.

You’ll see from the pictures that each one had a sign on it. I had those made up at Kinkos. If you follow my Twitter feed, you’ll know I forgot to do that on Friday, and scrambled to get them done Sunday morning. Thankfully, Kinkos pulled it off. The total cost for the lamps, bases and cord was around $1300, but we should be able to get close to $800 back for the lamps at the end. So for a 8 week series, we have $500 invested in our stage. Not bad. You can click on any of the pictures to see larger versions. 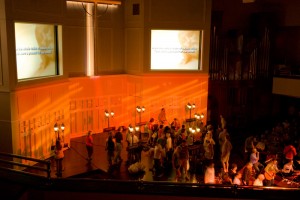 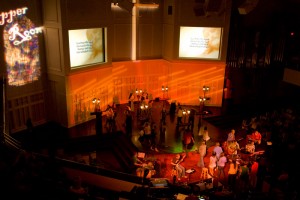 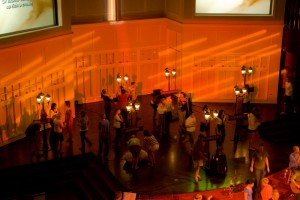 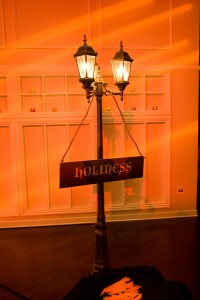 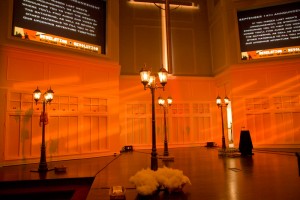 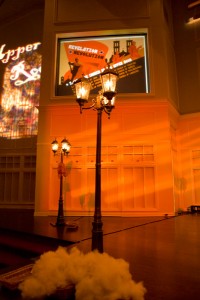