Still carrying on with this series on our new server, today I’ll look more closely at the two main administration tools; Server Admin and Workgroup manager. Each of the screenshots can be enlarged by clicking on them (and if you pay close attention to the names in these screens, you might pick up on a little geek humor) 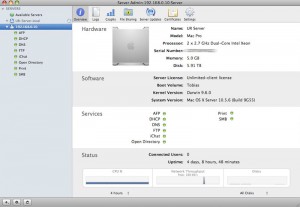 When you launch Server Admin, you’re presented with a list of all the servers on your network. Once you select one and authenticate in, you get a nice overview of what is going on currently with that server. You see what services are currently running and have access to each configuration pane. I’m really impressed with the organization of the admin app. Hard-core sys admins may be frustrated with the number of clicks it takes to get something done, but I appreciate the very visual, even attractive, presentation of controls. 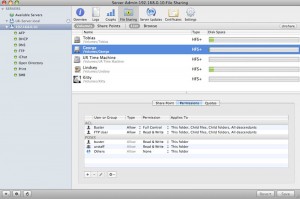 This is a look at the file sharing configuration. Once you turn start various file sharing services (AFP, SMB, FTP, NFS), you share volumes or folders. You have standard POSIX rules, just like we’ve had in Mac OS for a long time (Owner, Groups, Everyone), as well as ACLs (Access Control List). It’s easy to set up highly granular control over the sharing of sharepoints, folders and files. 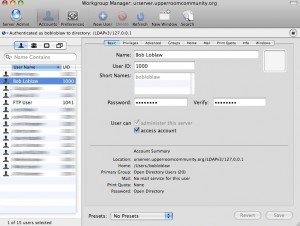 Again, as you’d expect, Workgroup Manager is where you administer the user and group accounts. Again, it’s very visual and intuitive for the most part. It would be easy to conclude Leopard Server lacks power because configuration is so easy. That, however, would be a mistake. While we don’t have need for many of the advanced capabilities it provides, there is a lot of power under the hood. 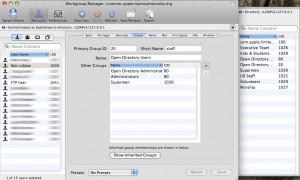 Users can be managed right down to individual system level preference panes; network and portable home directories can be set up; mail and print quotas are easy to set and monitor. Software updates can be deployed over the network and there are some pretty solid security features, including single sign-on Keberos.

Now, we’ve only had the server running for a few weeks, but it’s been rock-solid. I’ve not had a single service hang, and it’s plenty fast for our uses. In fact, it’s considerably more hardware than we really need right now, but my plan was to grow into it, not out grow it in a few years. We set up VPN through our Astaro firewall (which works great, and may come up again in a future post), and I’m able to manage the server remotely with no problems. The main reasons I chose Leopard Server were reliability and ease of management, and so far, it is a great fit.

There are a few things that aren’t perfect, of course. The most glaring omission is the ability to push out calendar synchronization to the iPhone and iPod Touch. This is slated to be updated in Snow Leopard, and I’m eager awaiting that upgrade. We won’t really use iCal server until then. While the applications give most users access to the configuration tools they will use the most, some things still require a trip to Terminal. For example, I wanted to send my log files to a smaller partition of my backup drive, instead of to the boot drive in case a runaway process starts logging like crazy. While it’s easy to view the logs from Server Admin, there’s no way to send the logs to another spot. My pal Erik was able to accomplish it by creating a symbolic link in Terminal, but have no idea how. To be fair, that’s a pretty arcane task, so I’m not sure it makes sense to build it into the application.

Other than those few things, I’ve not found anything I have wanted to do that I can’t. It fits the bill quite nicely and should serve us well for a long time to come. The fact that someone like me with a very solid background in using and working with Macs (23 years this year!) was able to get it set up and running with minimal fuss in a few hours speaks volumes. I’m pretty sure that after a few hours on a Windows Server I would still be trying to get it to connect to the network (granted, I don’t like Windows and use it as little as possible). I’ll keep you posted as we roll out more services.