I’ve been using Photoshop since around 1991. I don’t even remember what version that was, but it’s capabilities pale in comparison to CS3 or CS4. Through the years, Adobe has thoughtfully added a ton of features that actually save digital artists time (along with a lot of bloat–but that’s another column). I’ve been using these two tricks for quite a while now, and over the last few weeks, I’ve found they aren’t necessarily well-know. Both of these functions can be found in the Automate menu. Automation is a great way to handle repetitive tasks. I can remember spending an enormous amount of time building photo-slide shows from scanned photos 10-12 years ago–not because they were hard, but because each photo had to be scanned, re-sized, tweaked and finally dropped onto the timeline. These two tricks will save you enough time to enjoy a leisurely lunch and get home early.  So here we go.

If you’ve ever had to take a stack of printed photos and make them a digital slide show, you quickly learned that scanning each picture individually will drive you insane. Instead, we stack as many pics as will fit on the glass and hit scan. But then, you have to select each individual shot, copy it to a new document, touch it up and save it. Or do you? 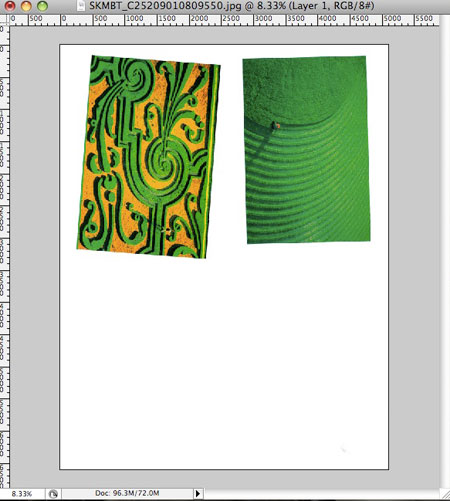 The starting point…This is how the scans come in. Actually, for the purposes of illustration, I made this one worse than normal. But you get the idea. Instead of using the measure tool to figure out the angle you need to rotate, selecting and copying and all that, go to File –>Automate –>Crop and Straighten Photos. 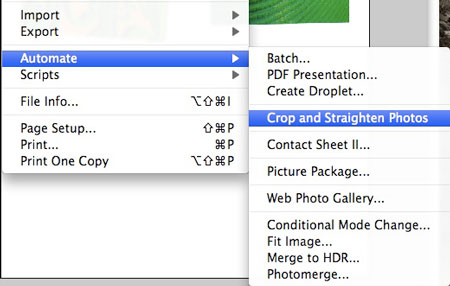 Your new best friend.The progress bar appears and a few seconds later (depending on how big the image is, how much RAM you have and how many cores of processing are available) and you end up with this: 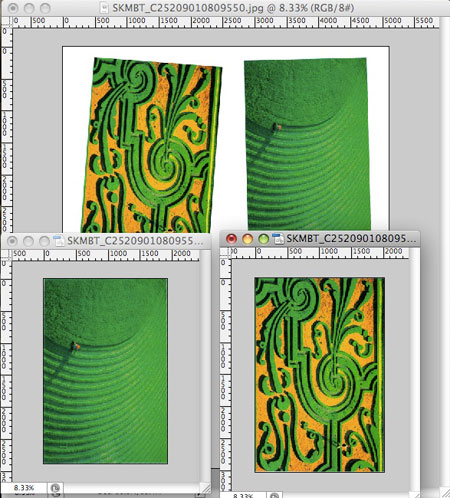 I know…sweet, right?It selects the individual photos, cuts and pastes them into new documents after cropping and straightening them. How cool is that? If you have a copier/scanner/fax/coffee machine multi-function unit in your office that will scan 11×17, imagine how many images you could process in a short time? That stack of photos doesn’t look so daunting now, does it? So that’s the first tip.

Sometimes, you need to do the same thing to a ton of files. For instance, yesterday, I had a folder full of digital photos that I needed to shrink down to 800×600 for presentation in ProPresenter. Now, I’ll admit, I really didn’t need to do that, Pro will re-size them on the fly. But that’s inefficient, and I can’t stand inefficiency. So I set out to re-size them. In the olden days, we would have to open the file, select Image Size (or hit shift F3 in my keyboard-shortcut world), type in 800, hit return, then hit clover-S to save the file. And that’s if we wanted to keep the same name. If we didn’t it was Save-As, rename the file, then repeat. Not bad if you have 3 photos, but 300? Not so much. 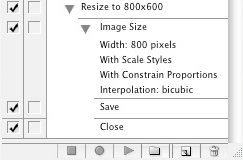 Step 1: Create the Action(s) you need to run on each image.The first thing you need to do is create an Action which includes everything you need to to do the image. In this case, it’s a simple re-size, save and close. In the days of interlaced TV, I would routinely create an action that would re-size all my images to around 1200 pixels wide (so I could zoom in without going past 100%), run a levels control to limit my white point to NTSC legal 100 IRE (235 on the White Output Level) and run a slight Gaussian Blur of .5 pixels to limit the jittery lines that happen when you zoom in on a high resolution picture in an interlaced system. The options are limitless. Whatever you need to do to all your images, you can set up in an action. Next up, open the Batch control. 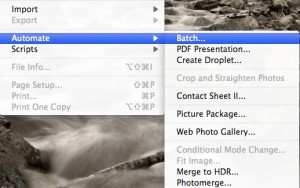 Found in the Automation MenuThe Batch window has many options, and it may take a few tries to get it right. I always recommend copying your folder of images to the desktop or somewhere else safe, just in case. Which brings up a good point I should have mentioned earlier. The Batch process will process every image in a folder. So make sure you actually want to process all those images. 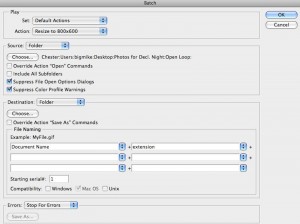 Click to enlargeIn this case, you can see at the top I’ve selected my Resize to 800×600 action. I’ve selected my folder full of images and set up my destination and file naming options. You can get really creative with your naming if you want to. In my case, I just wanted to save and close, so I built it into the Action. The way the dialog is set up here would actually throw an error, but I wanted to illustrate some of the options. Like I said, it may take a  pass or two to experiment and get it working the way you want (which is why it’s a good idea to have an extra copy of the source files).

When you’re done, hit OK and grab a latte (or Starbucks Signature Hot Cocoa, my personal favorite). You’ll see your images flash before your eyes and before long, all your files will be just the way you wanted.

Tomorrow, I’ll throw out some tips for working in Bridge, the oft-forgotten stepchild of the CS Suite.